The Governor of Ekiti State, Dr Kayode Fayemi, has called on women to utilize the opportunity of their participation in economic and political activities to advance gender equality and sustainable development for women empowerment.

Dr Fayemi made the call Tuesday in Ado-Ekiti while declaring open the 4th Ekiti Gender Summit. organized by the office of the Wife of Governor and the Ministry of Women Affairs and Social Development, themed: “Gender Equality and Women’s Empowerment Post Beijing: Political Will and Impact”.

Fayemi, who lamented that a lot of women still live in abject poverty and lack basic rights and freedom, called on men to be conscious of gender-related issues and rally support to fight against gender imbalance in such a manner that women would enjoy same freedom, privileges and opportunities to flourish and reach their full potential in all strata of life.

The Governor told the gathering that the tone of the theme of the summit was in tandem with the various programs designed and implemented for the attainment of sustainable gender development in the State.

He noted that the demonstration of his administrations strong political will in the fulfilment of the provisions of the Beijing Declaration had led to the enactment of gender-friendly laws like the Gender-Based Violence (GBV) prohibition law, 2011 which was amended in 2019; Gender Equal opportunity law in 2013 and the domestication of the National Gender Policy in 2012. 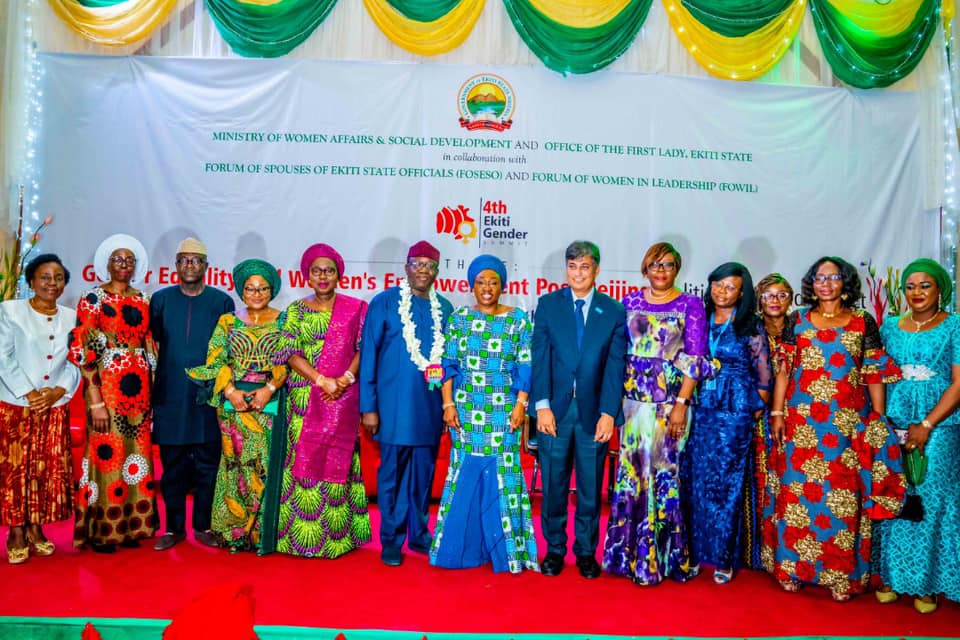 Governor Fayemi said aside the recent appointment of the first female Head of Service in the state, Ekiti had the largest number of female lawmakers in the country, in addition to having other women appointed as commissioners, special advisers, chairmen and members of boards and commissions in actualization of the affirmative action policy that allocated 35% of appointments into position of authority to women.

Fayemi, who is the Chairman of the Nigeria Governors Forum (NGF), assured participants of more commitments from his administration to gender empowerment and gender equality. He said a series of economic empowerment programs have been successfully implemented in which empowerment tools like grinding machines, sewing machines, hairdryers and others were supplied to indigent families across the State.

Earlier, in her address, the wife of the Governor, Erelu Bisi Fayemi, who is also the convener of the summit, said Ekiti State has a reputable legal framework designed to promote gender equality and empowerment, adding that a compendium of all the laws has been put together and would be distributed to participants in the summit. 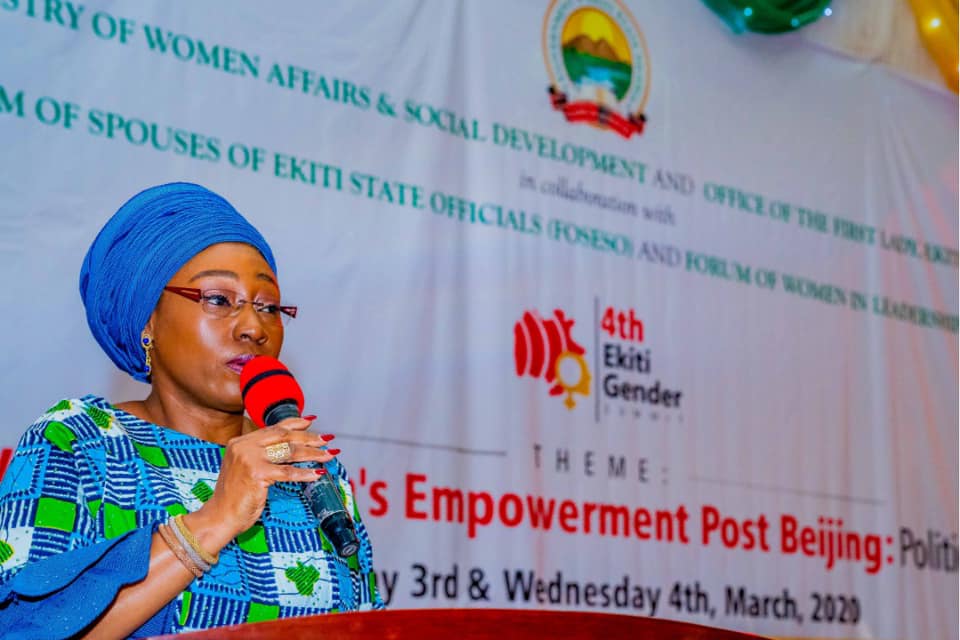 The wife of the governor regretted that the political will and supports women empowerment received during the first term of Fayemi administration suffered set back immediately he left office in 2014.

A major highlight of the event was the presentation of the United Nations International Children’s Emergency Fund, (UNICEF) Female Genital Mutilation (FGM) Award to the Governor by UNICEF representative, Dr Tushar Rane for being committed to the fight against gender-based violence.

Dignitaries at the summit were the First Lady of Ondo State, Mrs Betty Akeredolu; First Lady of Osun State, Mrs Kafayat Oyetola; Speaker of Ekiti State House of Assembly, Rt. Hon. Funminiyi Afuye; his Deputy, Hakeem Jamiu, members of the State Executive Council and their spouses, members of the House of Assembly and their wives, female political office holders, a female representative from security agencies, a representative from the Southwest states and other critical stakeholders drawn from all walks of life.

A new study from Juniper Research has found that the number of people using digital therapeutics and wellness apps will grow...
Read more
Sports

The COVID-19 outbreak has had an enormous impact on the football industry, causing considerable drops in clubs’ revenues and their players’ market value. According to...
Read more
Business & Economy

DAZN, the leading global sports streaming service, will expand to more than 200 countries and territories beginning December 1. The platform will debut with...
Read more
Transportation

Geely Automotive has earmarked $54m of funding towards the development of ‘healthy, intelligent vehicles’, as a furthering of the fight against COVID-19. The exclusive partner...
Read more
- Advertisement -