#IWD: 66% of Nigerians think that there is no Gender Equality in the Country – Report

Abuja, Nigeria. March 10th, 2020 – NOIPolls joined the rest of the world in celebrating the 2020 International Women’s Day (IWD) on 8th March 2020. The IWD is a worldwide annual event aimed at achieving gender equality globally. The theme for this year is “I am Generation Equality: Realizing Women’s Rights”, #EachforEqual. The Day was an opportunity to reflect on the progress made, to call for change and to celebrate acts of courage and determination by ordinary women, who have played an extraordinary role in the history of their countries and communities. 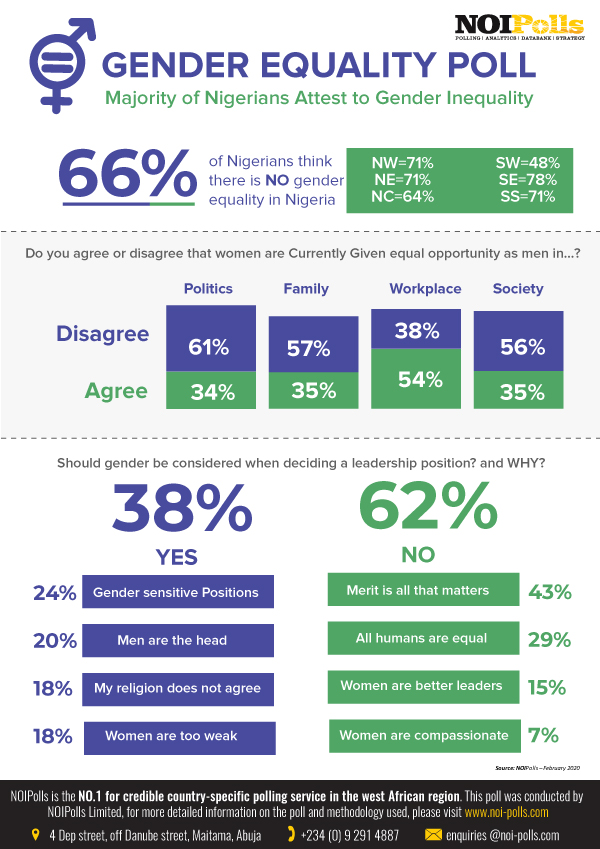 Further findings revealed that women are not currently given equal opportunities as men in politics, family, and society as stated by more than 56 percent of the respondents in each category. However, this perception is slightly different with respect to the workplace as 54 percent of Nigerians agreed that women are currently given equal opportunity as men in that area. It is, therefore, important that the issue of gender inequality is tackled to allow for a diversity of opinion and participation of different groups in the country. Interestingly, 65% of Nigerians are of the opinion that the status quo should be maintained while 15 percent believe that gender equality can be achieved by passing the Gender and Equal Opportunity Bill (GEOB) by members of the National Assembly.

Lastly, most Nigerians (62 percent) disclosed that gender should not be considered when deciding on a leadership position rather merit, capability and qualification should be the yardstick for deciding leadership positions. Hence, this is a call that women should be in the forefront of societal development as well as having a better representation in leadership positions. These are key findings from the gender equality poll conducted in the week commencing February 24th, 2020.

International Women’s day is a day set aside by the United Nations to celebrate women and their achievements in various facets of life. It also a day to reflects on the progress made in the pursuit of gender equality given that no country in the world has achieved gender equality. Statistics have shown that about 2.7 billion women around the world could not access the same choice of jobs as men because of legal restrictions which clearly shows the issue of gender inequality in the world. Also, less than 25 percent of parliamentarians around the world were women as of 2019.

Globally, women still earn 20 per cent less than men on average for doing the same type of work. The COVID-19 pandemic is likely...
Read more

A call has been made to all women around the world to rise and challenge gender discrimination, bias, inequality, and stereotype against women in...
Read more

International women's day is being celebrated around the world but in reality gender inequality or the preferably useful word called gender equity is far...
Read more

Commits to 8 weeks parental leave for all biological and adoptive parents and 6 months for birth mothers In its effort to promote gender...
Read more
- Advertisement -