Think back over the last month. What types of food have you and your family consumed? Have you eaten a balanced and diversified diet? The answer may not matter; what matters is who or what influenced your food choices. These and more are the questions that researchers from the International Institute of Tropical Agriculture (IITA) set to find out. The study was carried out in Uganda with rural households as the sample population. The researchers wanted to combat malnutrition, but before recommending policy options, they needed to understand how and why people eat what they eat. The study, titled Farm Production Diversity: Is it important for Dietary Diversity? Panel Evidence from Uganda was recently published in Sustainability.

The two existing hypotheses are i) when rural communities grow a variety of crops on their farms, they will have a balanced diet, thus solving malnutrition – especially undernutrition that is prevalent in most African rural. The other hypothesis points to markets as the more important determinant of a varied diet. Haruna Sekabira, a social economist with IITA, together with other researchers, set out to study these hypotheses.  Their results show that the better option for Uganda (where the market infrastructure is relatively poor, and the largest proportion of the population is dependent on agriculture) to combat rural hunger and malnutrition is via farm production diversity. 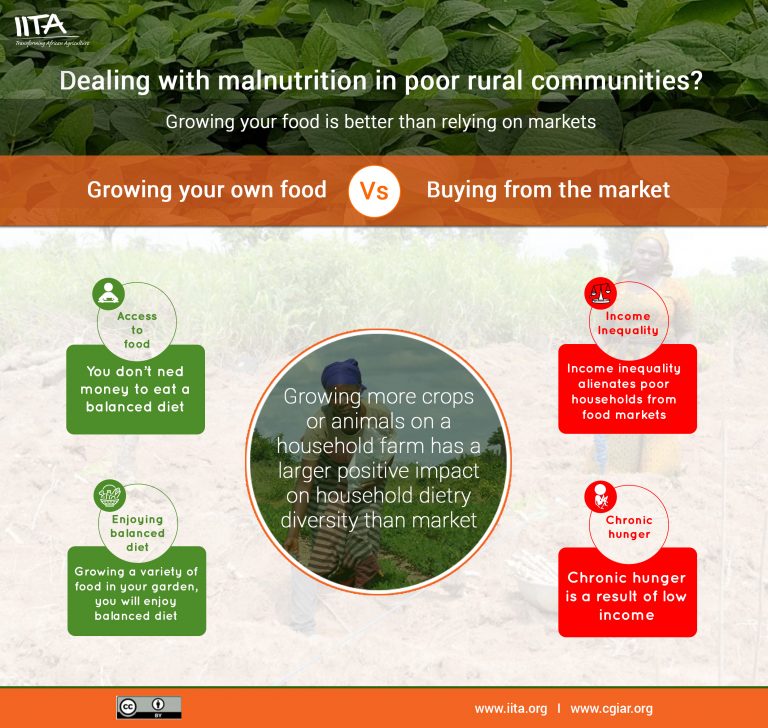 Moreover, merely having access to a market selling a variety of foods does not necessarily mean that households will consume a diversified diet. According to the researchers, “this is because access to food is dependent on income access.” They further explain that “chronic hunger has been attributed to food access being dependent on income access. Therefore, income inequality alienates poor households from food markets” i.e. if you do not have the money you will not purchase a variety of foodstuffs even though they are on sale. However, if one can grow a variety of food in their garden, they will enjoy a balanced diet.

With the right pathway to solving rural malnutrition resolved, the study unearthed some other interesting findings that influence food choice at the household level. For instance:

Remoteness was associated with better dietary diversity since remoteness is linked to more land available for farming, allowing for more crops/livestock to be produced on the home farm.

Indirectly, therefore, policies that promote farm production diversity in Uganda [and rural Africa] are more relevant in improving food and nutrition security. This is not to say that markets do not have a role to play in dietary diversity. They do, however, growing more crops/animals on a household farm has a larger associated positive impact on household dietary diversity than market access.

Vingroup to give 2,400 ventilators to Russia, Ukraine and Singapore

In the just concluded week, the values of FGN bonds traded at the over-the-counter (OTC) segment appreciated further for most maturities tracked amid demand...
Read more
Business & Economy

To improve their yields and incomes, African cassava farmers need regular and reliable access to high-quality planting materials of the newest and best varieties. ...
Read more

The Youth in Agribusiness office of CGIAR-IITA is partnering with the Mastercard Foundation in Nigeria to implement the Young Africa Works strategy. A joint media release on...
Read more

Canada announced today that it will be the first country to pledge funds to a new facility set up by the UN’s International Fund for...
Read more
- Advertisement -