E-commerce sales hit $25.6 trillion globally in 2018, up 8% from 2017, according to the latest available estimates released today by the UN’s trade and development body, UNCTAD, at the start of its UNCTAD eWeek event.

The online event will explore digital solutions and policies to help the world recover from the coronavirus crisis. It runs from 27 April to 1 May and features dialogues among ministers, heads of international organizations, business executives and civil society representatives.

According to the UNCTAD analysis, the estimated 2018 e-commerce sales value, which includes business-to-business (B2B) and business-to-consumer (B2C) sales, was equivalent to 30% of global gross domestic product (GDP) that year.

“The coronavirus crisis has accelerated the uptake of digital solutions, tools and services, but the overall impact on the value of e-commerce in 2020 is still hard to predict,” said Shamika Sirimanne, UNCTAD’s director of technology and logistics.

The 2017 value of global e-commerce was estimated at $23.8 trillion, based on a revised methodology.

The value of global B2B e-commerce in 2018 was $21 trillion, representing 83% of all e-commerce, comprising both sales on online market platforms and electronic data interchange transactions.

The United States continued to dominate the overall e-commerce market (Table 1). It remained among the top three countries by B2C e-commerce sales, alongside China and the United Kingdom.

The leading B2C e-commerce companies are based mostly in China and the United States. The world’s top 10 B2C companies in 2018 generated almost $2 trillion in gross merchandise value (GMV), according to the report.

Alibaba (China) was far ahead with a GMV of $866 billion in 2018, followed by Amazon (United States) with $277 billion. However, in terms of revenue, JD.com (China) and Amazon were ahead of Alibaba.

Developing and transition economies accounted for about half of the top 20 economies by B2C e-commerce sales. In relation to GDP, B2C e-commerce in these economies was the largest in Hong Kong (China), China and the United Kingdom, and the smallest in India, Brazil and Russia.

Among the top 20 economies, the extent to which Internet users engage in online purchases varies considerably. For example, in 2018, 87% of Internet users in the United Kingdom shopped online, compared with only 14% in Thailand and 11% in India.

The interest in buying from foreign suppliers continued to expand. The share of cross-border online shoppers to all online shoppers rose from 17% in 2016 to 23% in 2018.

“Still the number of online shoppers, while huge, is an indication of the scale of the digital divide and the future market potential of e-commerce, both of which need to be addressed,” Ms Sirimanne added.

Today only half of the world’s 7.7 billion people are connected to the internet and its benefits. This limits the ability of many developing countries to use digital solutions to cope with the current health and economic crisis. 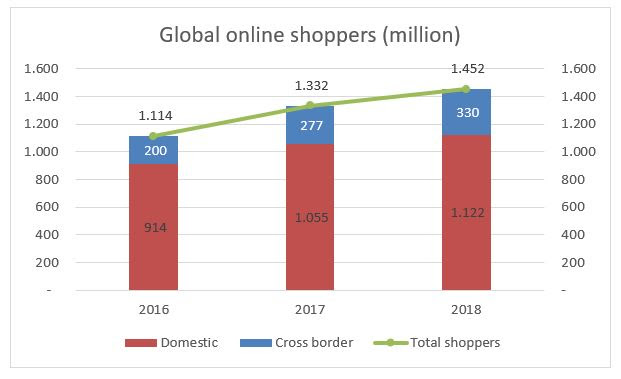 Measuring the value of e-commerce remains a challenge, as most countries still do not publish official statistics on it, even though more governments are collecting information.

Also, countries that publish data on the value of e-commerce sometimes do not follow international guidelines and often revise their statistics.

To take account of recent developments, UNCTAD has adapted its methodology for estimating global e-commerce.

Due to the changes to the methodology as well as country revisions to their 2017 data, the latest e-commerce estimates are not directly comparable to those published by UNCTAD in previous years.

E-commerce Through And Through With Konga

Which Health, Food Segments Are Missing Out On The E-Commerce Boom?

NielsenIQ - The pandemic has introduced over 22 million new U.S. shoppers to the online channel since March 2020, but growth in online sales...
Read more

Many billions of data sets are entangled and suffocated in SMEs’ business value chain. This scenario is creating an enormous problem to leveraging e-Commerce...
Read more
- Advertisement -