Last week, UNILEVER Nigeria released its Q1’20 results, reporting semi-impressive earnings in the quarter, considering the weak performance in H2’19. While revenue came in 31% lower y/y at ₦13.3 billion, the figure overshot our ₦12.6 billion estimates by 5%. Notably, the lower y/y figures indicate that revenue continues to recover from the normalization effect of the new receivables policy. On a q/q basis, Q1’20 revenue came in 44% higher than Q4’19, likely a result of frontloaded demand due to the pandemic as well as the effect of the weak Q4’19 base.

Food accounted for 55.6% of topline, growing 41.6% q/q but contracting 19.9% y/y while HPC (44.4% of topline) grew 51.9% q/q but shrank 40.7% y/y. With the lockdown expected to last for the remainder of Q2 (Vetiva base expectation: Q3’20), we expect weaker aggregate income levels to drive slower consumption in the economy. While we expect food consumption to remain somewhat resilient, consumers will likely down-tier brands or seek cheaper substitute food products to conserve a largely shrinking pool of savings. In this regard, we expect UNILEVER’s food segment (Knorr and Royco) to take a marginal hit as consumers shift patronage to cheaper seasoning brands and expect revenue from this segment to decline by 11% y/y to ₦28.4 billion (Previous: 33.7 billion). Meanwhile, supported by increasing awareness of personal hygiene, we see revenue for its HPC segment remaining stable for the year in an ebb and flow pattern mirroring the stock-up and consumption pattern of consumers. Thus, we forecast a 3% y/y decline in revenue to ₦54.7 billion (Previous: ₦63.5 billion).

Earnings back to positive territory

Driven by stronger volumes and impressive cost containment, UNILEVER reported a 560bps y/y improvement in the Gross margin to 26% in Q1’20 (Q1’19: 20%, Q4’19: -32%), ending the worrying streak of negative gross margins that began in Q3’19. We highlight reductions in fuel costs towards the end of the quarter as one possible driver. Also, recall that we expected to see some price increases in Q1’20, as Consumer goods companies take advantage of the VAT induced price changes to make some much-needed price adjustments. Overall, gross profit came in at ₦3.4 billion (Q1’19: ₦3.9 billion), 51% higher than our ₦2.3 billion expectation. EBIT, however, fell 65.6% y/y to ₦0.5 billion, driven by a surge in marketing and overhead expenses. On the positive side, however, UNILEVER reported a trade receivables impairment of just ₦49 million, a quarter of the figure in Q1’19, likely supported by the now normalized receivables policy. All in, UNILEVER reported a ₦0.9 billion Profit Before Tax (Q1’19: ₦1.2 billion, Vetiva; ₦-0.7 billion), supported by a net finance income of ₦0.5 billion (Vetiva: ₦0.5 billion). After accounting for a tax credit of ₦166 million, UNILEVER reported a PAT of ₦1.1 billion, 26.7% lower y/y but impressive compared to our ₦0.7 billion loss expectation.

The pandemic-led shock to the global economy continues to drive down local energy prices and provides a perfect mix with the expected decline in food prices – as global food supply outweighs demand due to reduced production – to reduce production costs. Furthermore, the resulting discount in fueling costs combined with the postponement of the pre-announced hike in electricity tariff and expected depression in consumer spending levels allows a tapering in operating costs. Thus, we foresee gross and operating margins printing at 24% and 5% respectively in line with the Q1 run rate. Not dismissing a potential need for borrowing, we believe that with a strong cash balance, Net finance income for the year should come in at ₦1.6 billion (FY’19: ₦2.0 billion). This would bring PBT to ₦4.4 billion and adjusting for tax, we arrive at a PAT of ₦3.0 billion. All in, we use to revise our target price to ₦8.55 per share and restate our SELL recommendation. 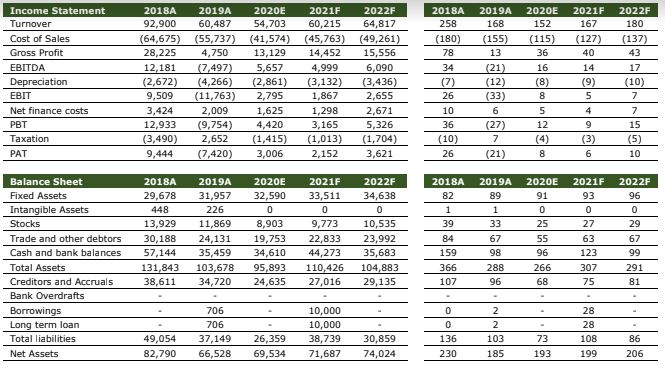 Unilever Nigeria Plc released its audited report for the year ended 31st December 2020. The Company recorded a Turnover of N61.9 billion in the...
Read more