Despite a promising outlook following its H1’19/20 results, GUINNESS Nigeria reported a weak 9M’19/20 performance showing a 5.3% y/y revenue decline to ₦96.0 billion, a 3.4% shortfall from our estimate (Vetiva: ₦99.4 billion). Notably, Q3’20 revenue dropped 5.3% y/y to ₦27.7 billion, weakened by poor domestic and export sales. Like the other major beer producers, we note that GUINNESS recently took advantage of the VAT rate increase to implement a series of much-needed price hikes in February. We estimate however that the higher prices could not make up for the fall in volumes in the quarter, likely due to the border closures and the start of lockdown protocols in March.

According to the company, sales of Guinness, Dubic and Mainstream spirits continued to grow in the period, while Malta Guinness was the hardest hit by export restrictions. While the lockdown order has been lifted in many states, social distancing and curfew timelines are expected to further restrict beer and spirits consumption. Thus, we expect revenue to shrink further in Q4’20 by as much as 41.4% q/q culminating in a full-year figure of ₦112.2 billion (-14.6% y/y).

Impressively, Cost of sales in Q3 declined 25.9%y/y, faster than the decline in Revenue, dragging Cost of Sales for 9M 6.7% down y/y. On the part of the company, we foresee increased collaboration with delivery merchants and online stores fostered through an amplified push of can drinks. If this happens, we believe that it would support revenue while improving margins due to the cheaper costs of an aluminum can. Also, with 9M gross margin (32.1%) growing 100bps y/y and beating our estimate (30.2%), combined with the expectation of reduced costs given lower energy prices, we expect a decent recovery from the pressure on Revenue to manifest in the EBITDA margin and forecast a slight 1.8ppts y/y decline in operating margin for FY’20.

In a surprising turn, GUINNESS’ finance costs in Q3 jumped considerably, (1.6x the previous quarter and 5x the previous year) majorly driven by a ₦1.4 billion loss on foreign exchange balances. Although we note that the company has taken steps to restructure its loans in this quarter. However, we expect the continued pressure on foreign exchange to overshadow these lower interest rates and negatively affect their interest expense for the full year. That said, we expect EBT to decline 68.2% y/y for FY’20 (9M’20: – 68.9% y/y). 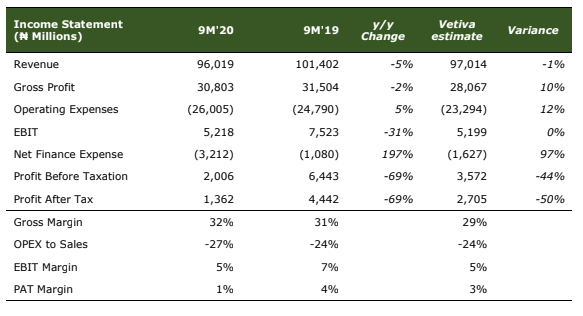 Guaranty Trust Bank Plc (GTBank) has long been regarded by industry watchers as one of the best run financial institutions in Africa, a reputation...
Read more
Business & Economy

Diageo today admitted profits for the past year plunged 47% hit by the closure of the on-trade activities and the cancellation of sports events...
Read more
Beverages: Alcoholic & Non-Alcoholic

Diageo Plc announces change to its Board of Directors

Diageo announces that Ho KwonPing will retire as a Non-Executive Director, effective 28 September 2020. Ho KwonPing has served on Diageo plc’s Board of Directors...
Read more
- Advertisement -

Guinness Nigeria Plc has informed the public about the material circumstances that will impact its full-year financial results for 2020. This is Following the...
Read more

Diageo, the maker of GUINNESS, has today announced a new global programme to support pubs and bars to welcome customers back and recover following...
Read more

Guinness Nigeria Plc – Heading Back to The Woods?

The broad performance of the equity market in the previous day was bearish, as the NSE All-Share Index lost 1.1%, to close at 2...
Read more
- Advertisement -