How Much Does World Owe China?

Massive wave of borrowing: Following a rise of over $10 trillion in 2019, global debt accumulation has accelerated substantially this year as an aggressive response to the COVID-19 pandemic takes shape. Gross debt issuance year-to-date has surpassed $14 trillion, nearly twice the level seen during the same period in 2019.

While all sectors are racking up more debt, this surge has largely been driven by a sharp surge in government borrowing. Gross government debt issuance hit a record high of $2.6 trillion in April—vs a monthly average of $1 trillion in 2019, and May is currently on track for a fresh record. At around $1.5 trillion, U.S. borrowing accounted for the lion’s share of the global government debt pileup in April. 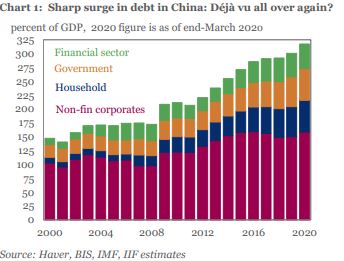 Our estimates, building on the CBO’s updated projections for U.S. federal debt, suggest that U.S. general government debt (federal, state and local governments) will increase from 102% of GDP in 2019 to over 120% of GDP in 2020, before surpassing 140% in 2025.

Looking ahead, we expect total global debt across households, nonfinancial businesses, general governments and the financial sector to exceed $325 trillion in 2025. This would be an increase of nearly 30% from $255 trillion in 2019— see our April 2020 Global Debt Monitor. The U.S. and China are likely to account for 75% of the projected rise in global debt through 2025. 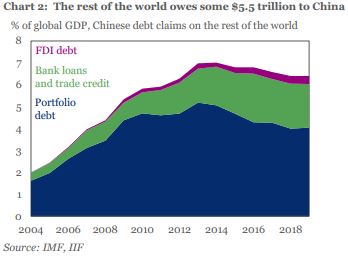 China has accounted for over 40% of the rise in global debt since 2007: The rise in China’s total debt in the years since the 2008 global financial crisis has been unprecedented, from around 172% of GDP to over 300% in 2019. This rapidly escalating leverage has been a major engine of global growth—but has also accounted for more than 40% of the rise in global debt since 2007. While such high debt levels may ultimately limit willingness to take on more debt, we estimate that China’s debt-to-GDP ratio saw a record quarterly increase in Q1 2020, jumping to over 317%—an eye-watering 17 percentage points higher than in 2019 (Chart 1). This rapid increase marks the largest quarterly surge on record, reflecting both the contraction in GDP (two-thirds of the rise in debt-to-GDP) as well as the spike in net borrowing (one-third of the rise).

China is now the world’s largest creditor to low-income countries: China’s outstanding debt claims on the rest of the world have surged from some $875 billion in 2004 to over $5.5 trillion in 2019—more than 6% of global GDP (Chart 2). The rise in recent years has been most striking in bank loans and trade advances, though portfolio debt investment (including reserve assets) still comprises the bulk of total overseas exposures (4.5% of GDP). 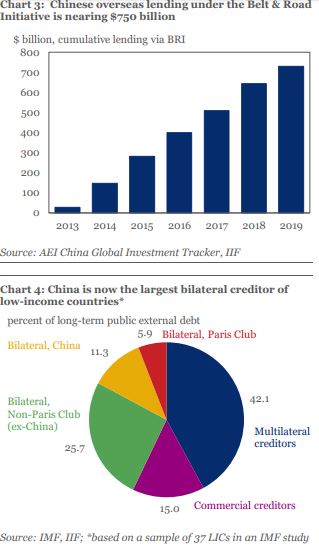 The Belt and Road Initiative (BRI) has played an important role in driving lending activity: since Xi Jinping launched this flagship initiative in 2013, at least $730 billion has been directed to overseas investment and construction contracts in over 112 countries (Chart 3).

BRI lending has therefore contributed to the substantial external debt buildup in many low-income countries. This group includes Cambodia, Djibouti, Ethiopia, Kenya, Kyrgyz Republic, Laos, Maldives, Mongolia, Tajikistan and Uzbekistan. Of these, Djibouti, Ethiopia, Laos, the Maldives and Tajikistan are rated at “high” risk of debt distress by the IMF– see our January 2020 Global Debt Monitor. Indeed, IMF estimates suggest that China accounts for at least 11% of low-income countries’ external public debt, which is a much larger share than that of Paris Club countries (Chart 4). 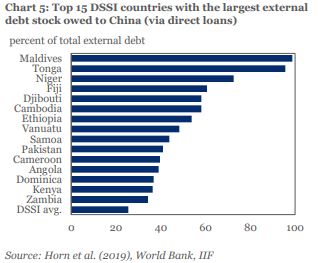 However, a recent academic study by Horn et al. suggests that up to 50% of Chinese overseas loans to developing countries are not reflected in the official statistics, largely due to incomplete reporting on SOE debt. Chinese lending in the context of the G20 DSSI: Many BRI recipient countries are eligible for the G20 Debt Service Suspension Initiative (DSSI).

Like other official bilateral creditors, China is a signatory to the initiative, though press reports suggest that China’s approach to implementation could differ from that of Paris Club creditors.

Some key issues remain to be clarified, including the demarcation between official and private sector claims, which is particularly relevant given that much Chinese BRI lending has been done on commercial or near-commercial terms.

Many DSSI countries are highly indebted to China, with Pakistan, Angola, and Ethiopia on top of the list in USD terms. Our estimates suggest that China accounts for over 25% of the total external debt of the DSSI countries, varying from 1% in Comoros to over 98% in the Maldives (Chart 5).

Tonga, Niger, Fiji, and Djibouti, and Cambodia are among other countries with a relatively high reliance on China for external financing.

A back-of-the-envelope calculation suggests that full debt service suspension by China could free up $7bn for the DSSI countries through the remainder of this year.