We’ll Not Forget Your Sacrifice

The supreme sacrifice by the frontline health and emergency workers in giving their all to the response in containing the Coronavirus (COVID-19) pandemic in Lagos State has been recognised by the State Government. 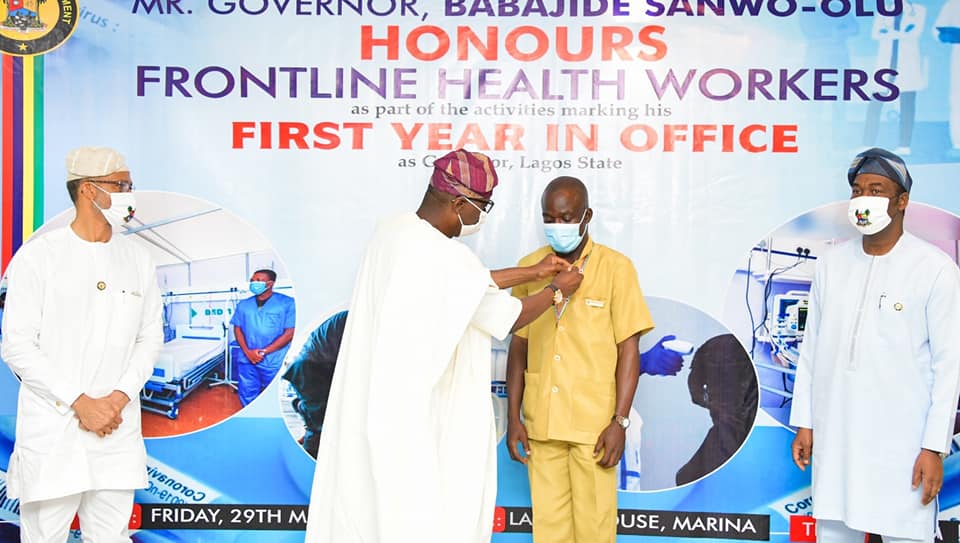 Governor Babajide Sanwo-Olu honoured leaders of various medical teams deployed to all isolation facilities across the State, presenting them with plaques of honour in appreciation of their resolve to lay down their lives in the battle against the pandemic. 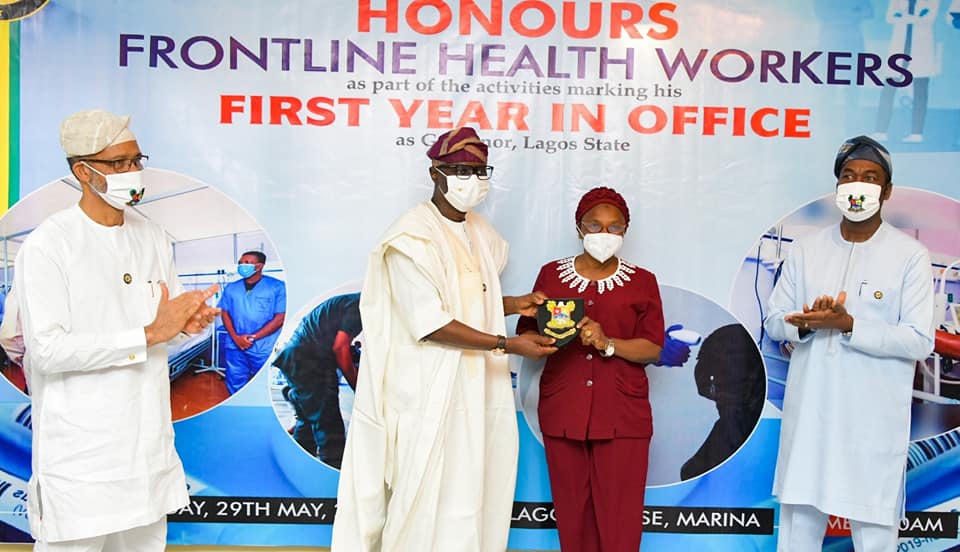 The 10 health workers received the plaques at a simple ceremony held at the State House in Marina as part of the low-key events marking the administration’s first anniversary. The selected honorees represented over 800 personnel deployed by the State to the frontline in the battle against COVID-19. 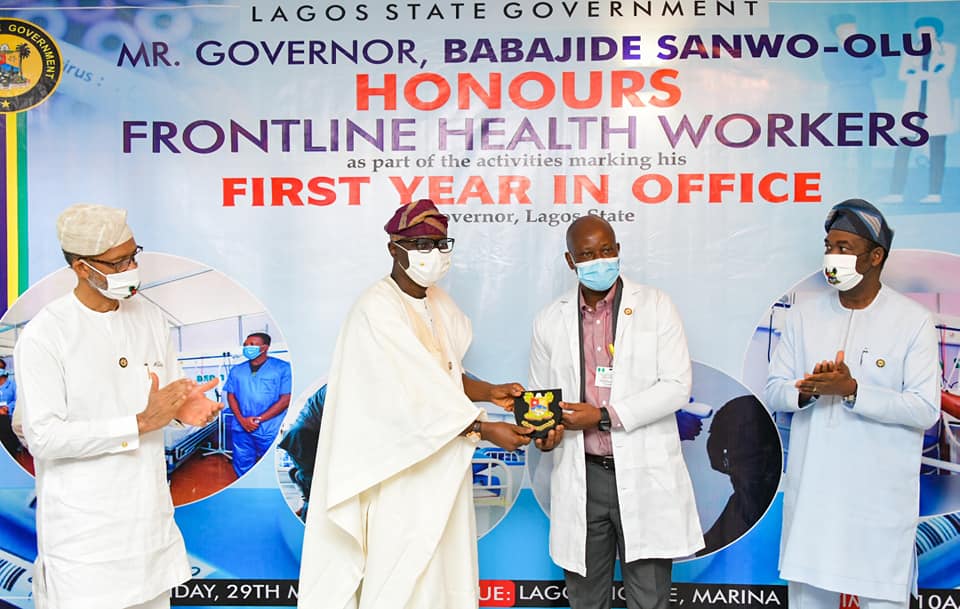 Sanwo-Olu described the health personnel as “a dedicated team of professionals”, noting that their commitment and selflessness had helped the Government to properly manage the healthcare in a critical period. The Governor appreciated all the health workers, saying they had played roles very well despite discomforting circumstances they face in managing infected patients. 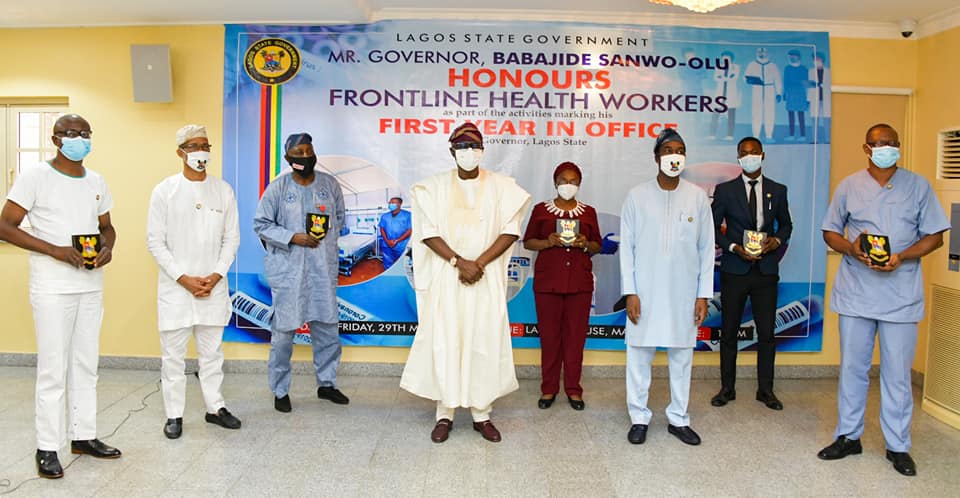 He said: “The current pandemic ravaging cities and communities all over the world is not something we have seen in the last 100 years. As the epicentre of the outbreak in the country, Lagos has taken charge and offered the leadership required in the response to stop the virus. As a demonstration of our commitment to winning the battle, we felt the least we can do on the occasion of our first anniversary is to select representatives of the frontline health workers for appreciation. 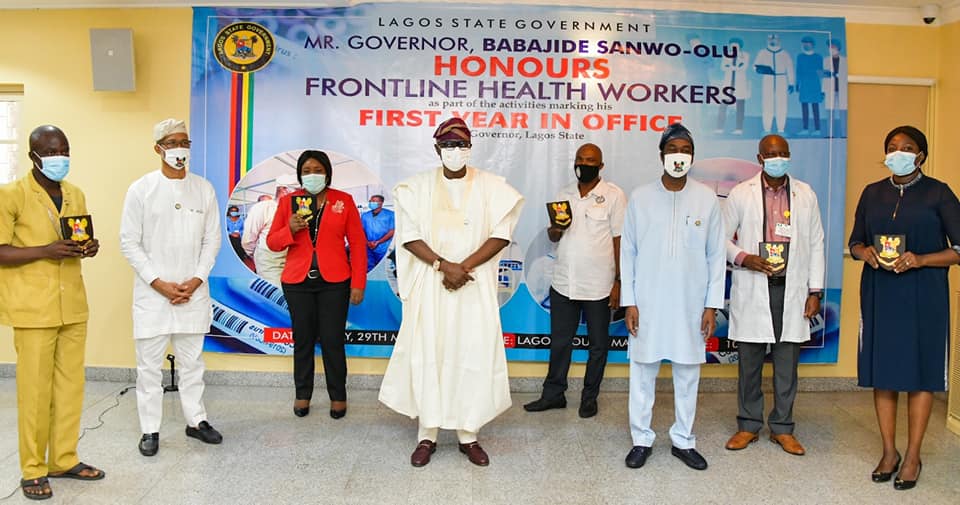 “The selected personnel are not the only persons deserving of the honour, but this is a testimony to our resolve to show appreciation to all the frontline workers. We have not come out of the pandemic or reach the peak, but we certainly cannot wait until the crisis is over before we start acknowledging the sacrifices of the committed people. Each team of medical personnel deployed have played their roles well and we will not forget your sacrifice. On behalf of the people and Government, I thank all frontline workers for their sacrifice.”

Sanwo-Olu said the period of health emergency had given the State an opportunity to appraise its emergency response mechanism and the need to overhaul the public health infrastructure. He said his administration would not leave anything to chance to prepare the State for the future health emergency, adding that lessons learnt would lead to changes in the handling of infectious diseases to prevent lapses in the future response.

He said: “It’s not only about COVID-19, but about the entire health infrastructure. We have taken lessons from the response towards containing the virus and we are taking the lessons beyond the pandemic. As a Government, we will not leave anything to chance; we will continue to raise the bar.

“In the revision of the State’s 2020 Budget, it is only the health sector that has seen growth in their numbers, both in the capital and recurrent expenditures. We believe the sector needs all critical support around improving the skills of personnel and facilities, providing infrastructure and ensuring technology is playing a lead role in managing health crisis. We have a dedicated team of medical personnel and I’m convinced we will survive this pandemic.”

Despite the ongoing battle against COVID-19, Sanwo-Olu noted that the Government had ensured the smooth running of all healthcare facilities across the State in attending to non-coronavirus cases.

Sanwo-Olu re-emphasised the need by the residents to keep to public health guidelines issued by the State Government, stressing that the use of face mask in public places and keeping social distancing remain compulsory in Lagos.

Presenting the health workers for the honour, Commissioner for Health, Prof. Akin Abayomi, said the team leaders had displayed uncommon passion and commitment in discharging their duties in this period of a public health crisis.