Supported by positive government policies, Dangote Sugar Refinery posted a relatively stronger YoY topline growth. Previously, DSR had struggled to retain market share in the past few years, owing to the influx of unlicensed sugar by smugglers. These unlicensed products typically come into the market at a relatively low price (due to a low cost of production). The weak macroeconomic situation in the Nigerian economy makes it easier for the unlicensed products to find their way to consumers given the low-pricing points of the products.

The combination of a low household income, coupled with a weak consumer’s purchasing power resulted in a situation where consumers became price-sensitive to products in the markets. As a result, the market share of DSR suffered significantly, wherein an initial market share of 60% dipped to about 40%.

Furthermore, capacity expansion by major competitors in the sugar industry resulted in increased competition among industry players. We note the expansion of capacity by Flour Mills Plc (Sunti sugar factory) and increased investments by BUA. Therefore, the implication for these developments implied a decline in the earnings of DSR.

However, a border closure policy implemented by the Federal Government in the third quarter of 2019 meant that the influx of the smuggled unlicensed products had to decline materially, thus resulting in an increased market share for DSR and other major industry players. According to the earnings performance of DSR, revenue rebounded to growth since the announcement and implementation of the border closure policy by the FG.

In Q1’20, revenue grew by 25% year-on-year (YoY) from N38.15bn to N47.64bn. The growth in revenue was driven by both price and volume growth. Volume grew by 20% YoY from 158.82k tonnes to 189.72k tonnes. We estimated a price increase of 4% YoY. As earlier mentioned, the effective border closure policy afforded DSR to raise prices and grow volume simultaneously.

Currency Devaluation Exerts Cost Pressure
Cost of sales grew by 37% YoY, from N25.56bn in Q1’19 to N34.92bn in Q1’20. The spike in costs was due to the impact of Naira devaluation on imports of raw materials. Another major factor contributing to the increase in costs was the higher VAT rate of 7.5% against the previous rate of 5%. Consequently, gross margin compressed by 500 basis points from 33% in Q1’19 to 28% in Q1’20.

Operating profit declined by 1% YoY from N10.86bn in Q1’19 to N10.75bn in Q1’20. As discussed above, the growth in revenue could not cover the increases in the cost of sales and operating expenses incurred during the period.

Profit before tax recorded a steeper decline of 11% YoY, owing to a combination of a lower finance income and a higher finance cost in Q1’20. Finance income declined by 61% YoY from N314.06mn to N124.05mn, attributed to a decline in yields in the fixed income markets and other short-term bank deposits. Finance cost, on the other hand, spiked by 3,166% YoY from N41.43mn to N1.35bn. The significant rise in finance cost resulted from a foreign exchange loss of N1.31bn incurred in Q1’20. The foreign exchange loss arose from the impact of a currency devaluation that became effective towards the end of Q1’20.

Cash Generation
Cash flows generation of the Group was strong in FY’19, reflected in the 992% increase in cash generated from operating activities, from N3.51bn in FY’18 to N38.36bn in FY’19. The spike in operating cash flows was majorly driven by improved working capital.

The improvement in working capital resulted from an improved collection from debtors and delayed payments to creditors in FY’19. In addition, the Group paid a lower tax of N12.27bn in FY’19, relative to N17.69bn paid in the previous year.

Free Cash Flow (FCF) stood at a positive of N16.58bn in FY’19 relative to a negative FCF of N7.25bn in FY’18 (due to the lower operating cash flow during the year). Free Cash Flow to Equity (FCFE) was also positive at N15.51bn in FY’19. The FCFE conversion of the Group, which compares the FCFE to net income, stood at 0.69x in FY’19 (FY’18: Nil). The FCFE conversion gives an insight into how much of net income is backed by cash during a given period.

Other Information
The Group announced that it will hold an Extra-Ordinary General Meeting on July 9, 2020, to consider an increase in the authorised share capital of the Group from N6.00bn to N7.50bn, by the creation of 3.00bn units of new ordinary shares of N0.50 each. The Group did not disclose the motive of this exercise.

Outlook and Valuation
We expect to see a sustained strong performance by DSR in the near to medium term due to our expectation that the border closure policy would be for a while. We also think that the increased market share and limited options by consumers could make it possible for  DSR to raise prices to cover higher costs – or at least recoup lost revenue due to prior price discounts. However, we also note the possibility of heightened competition among major industry players such as Flour Mills of Nigeria and BUA.

We forecast revenue growth of 31% YoY in the following nine months of the year, following a 25% YoY revenue growth in Q1’20. Our nine months revenue forecast is based on expected price and volume growth in the subsequent periods of the year. Meanwhile, we expect profit after tax to grow by 8% YoY to N24.13bn. We factored in expectations of higher operating expenses and foreign exchange losses in our estimates.

Our valuation of DSR was done using a blend of Discounted Cash Flow Model, the Dividend Discount Model, and the Residual Income Model. We discounted our projected free cash flow to equity, dividends, and residual income in our forecast years by our cost of equity estimate.

Overall, we arrived at a fair value of N9.81, a downgrade from our previous fair value estimate of N12.46. The major catalyst to the lower estimated fair value was the higher equity risk premium used in our valuation. We revised our equity risk premium from 6% as of November 2019 when we valued the Company last to 13% as of present. We arrived at our equity risk premium by using the Country Risk Premium approach, in which we believe gives a better assessment of the inherent risk involved in investing in the Nigerian equities markets. Therefore, our cost of equity estimate increased from 19% to 23%. Although we note that the required return of various investors varies, we yet believe that our cost of equity estimate is reflective of the opportunity costs associated with the investment.

At the current market price of N14.95, the stock trades at a 35% premium to our fair value estimate. Factoring the dividend yield of 8% (projected dividend: N1.20), the total return of the stock stands at -27%. Hence, we recommend a SELL.

Risks to Valuation
The major risks to our valuation include:

i. Reopening of the border: A key risk to our projections and valuation is the possibility of the FG reopening the borders. As it stands, the body language of the FG is skewed towards the continued closure of the border with no plans to reopen in the near to medium term. Should the borders be reopened, it might give rise to the influx of smuggled unlicensed products again, thus eroding the market share of DSR. 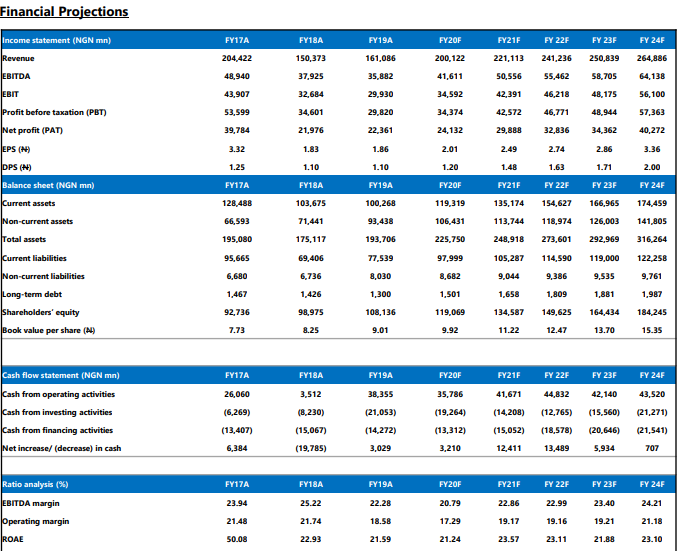