The FGN bonds market traded on a mixed sentiment today, slightly bullish at the short-end and bearish at the long-end of the bond curve. We still saw interest in the 2023s paper, largely driven by client orders, with trades settling around 4.15% levels.

At the tail of the curve, we saw a bit of profit-taking on the 2034s and 2036s maturities which offered around 10.10% for most of the trading session. Subsequently, yields compressed by c.19bps across the benchmark curve.

We expect more profit-taking action the rest of the week, especially at the long-end of the bond curve. 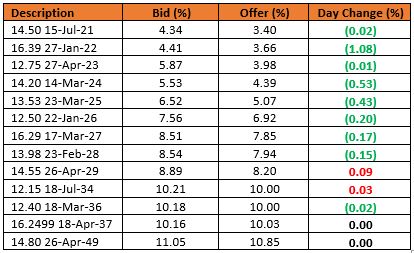 The OMO bills space traded on a very bearish note as system liquidity was further squeezed following another statutory debt (AMCON Charge) hit banks. January papers weakened by 70bps D/D, with trades settling around 6.10% for most of the trades executed.

We also saw a bit of action on October bills in small volumes which traded around 5.35%. The benchmark OMO curve expanded slightly at an average of c.6bps at the close of the trading session.

We expect the market to remain bearish in the interim triggered by the liquidity shortage in the interbank market. 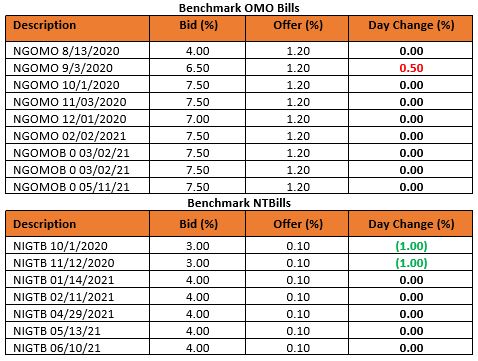 Most of the banks camped at the SLF window consequently causing rates to move upward slightly by an average of c.63bps.

We expect interbank rates to hover around this level as the banks are expected to remain at the SLF window to plug funding gaps in the short term.

The FX remained muted with rates remain flat on most of the market indices. The IEFX window saw a bit of action although remained bided at N387/$ and N389/$. However, at the Cash and transfer market, the naira depreciated by an average of N0.85k to close the day at N458.50/$ and N462.50/$ respectively.

It was a typical session in the NIGERIA Sovereigns, with trickles of demand seen across the short- and mid-tenor papers causing yields to compress slightly by another c.6bps on the average across the sovereign curve.

In the SSA space, the Angola 2025s had a second consecutive weak session as sellers continue to improve offers in another profit-taking driven session for the paper.

The NIGERIA Corps papers had a quiet session, as local demand on the FIDBAN 2022s caused yields on the paper to compress by c.16bps D/D. 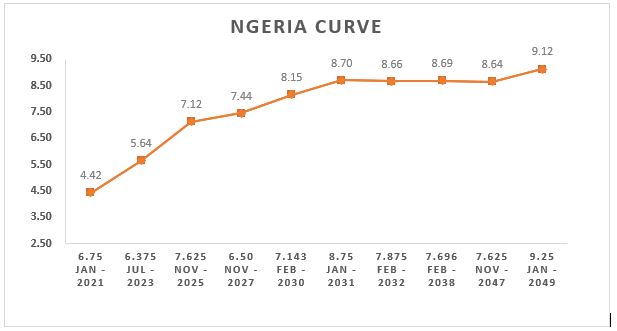 The Bond market opened the week on a slightly more active note, with spreads getting tighter across the curve. This came on the back...
Read more

IWD 2021: Zedcrest Encourages Women to vie for Leadership Roles and Strive for Excellence

As the world marks this year's International Women's Day (IWD), women have been urged to strive for excellence and choose to challenge to be...
Read more