The calmness in the FGN bond space persisted for a 2nd consecutive session with very slim volume passing through the benchmark curve. The short end of the curve opened and remained quiet, although there were few bids for the 2021s at 3.50% with no offer to match.

At the tail of the curve, most of the market action kicked off and ended on the 2036s and 2049s. However, more of the trades executed was on the 2049s which settled around 10.91% level losing c.4pts from yesterday’s closing.

We expect trading activities to increase next week but on selected papers offered at the juicier level. 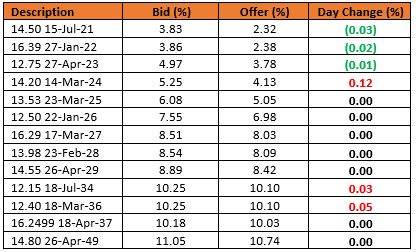 The OMO bills space ended the week on a very frail note as trading activities dwindled across the curve. A larger part of the trading session was dominated with much bears of the offers seen at the short end of the curve. However, by business close, the market witnessed a bullish run for the latest OMO issue (08th June bill) with the majority of its trade settling around 6.60% levels while yields compressed by an average on c.48bps across the curve.

At the NTB space, there were more retail offers with few bids to match especially for the 27th August maturity which was offered at 2%.

Next week, activities are expected to increase especially at the beginning of the week albeit more bulls as the tightness in the system liquidity ease. 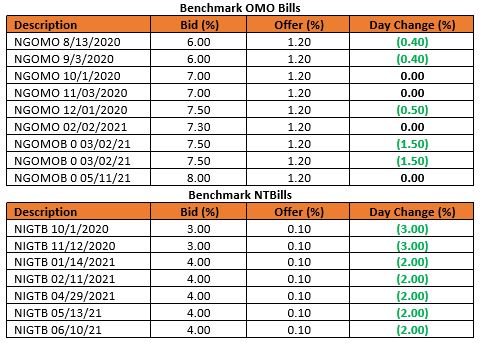 System liquidity remained slightly liquid opening the day approximately N136.40bn positive. Consequently, OBB and OVN slide slightly, dropping by 10.86% on the average on both the OBB and OVN rates closing the week at 13.80% and 14.10% respectively.

Next week, we expect to drop slightly at the beginning of the week but inch up by the end as the market sort to raise funds for the bi-weekly FX retail auction.

At the Interbank market, The Naira depreciated by 0.50k at the I&E FX window, as supply squeeze continues to affect the general flow of funds which remained sparely low. We also it saw dip by approximately 2k in the cash and transfer window as the market continue to react the APEX bank converging rate the CBN spot and SMIS space thus closing the week at N463/$ and N466/$ respectively.

The NGERIA Sovereign tickers weakened to close the week, more bearish than bullish as the market saw a bit of profit-taking across the benchmark curve, mostly on the mid- and long-tenured papers. Yields expanded by an average c.13bps across the sovereign papers. At in the SSA space, most of the traded on a quiet note although we with more offers on the Angola papers but in small sizes

At the NGERIA Corps tickers, the FIDBAN 22s and UBANL 22s were the most active of the tracked papers moving at the opposite sides of the train as yields adjusted on both papers by –c.34bps and +c.40bps respectively. 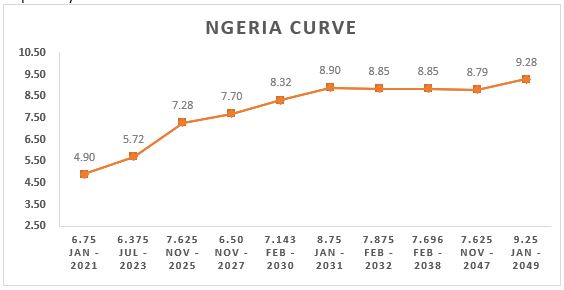 MediaReach OMD, a frontline marketing and media agency, had during this period of the coronavirus (COVID-19) pandemic, guided media...
Read more
Business & Economy

A summary of the economic and market happenings within the week and stock recommendation within Afrinvest's coverage. Last week, the domestic equities market closed positive...
Read more
Brand News

FGN Bonds The FGN bonds space opened the week on a very hushed tone as yield continued to drop across the benchmark curve. With the...
Read more

Nigeria’s total debt grew by almost 17 percent in one year as at September 2019 to stand at N26.2 trillion, the Debt Management Office (DMO) has...
Read more

The National Bureau of Statistics (NBS) has said Pension Asset and RSA Membership Data in first quarter 201 moved to 8,569,037 workers. According to the...
Read more
- Advertisement -