The FGN bond market continued on a very sluggish note although with increased trading activities compared to yesterday. Market interest shifted from shorter-dated maturities to the long-end of the curve, especially on the 2034s and 2049s papers which saw most of the market actions, settling around 10.10% and 10.88% for most of the market trades. We also saw some supply in the 2026s maturity which initially offered 7.25% but lost 5pts to close the day at 7.30%. Subsequently, yield compressed by an average of c.7bps by the close of business.

We expect mixed sentiments in the final trade session of the week, with more actions from profit takers expected at the tail-end of the curve. 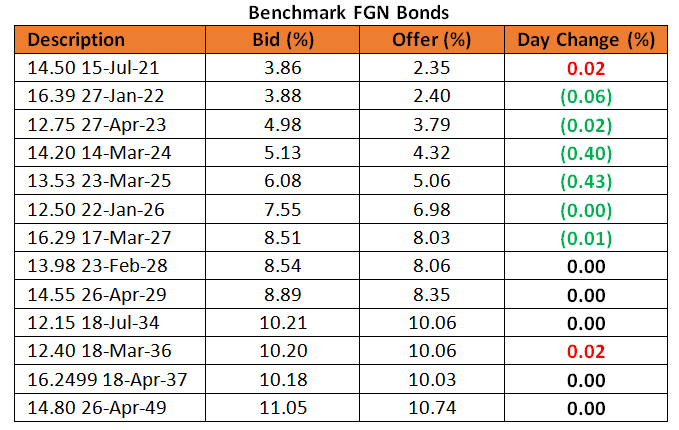 The OMO bills space remained bearish, with less aggressive offers despite the improvement in system liquidity. Contrary to the bullish expectations, we saw more volumes on offer across the OMO curve especially on the latest OMO issue 8th June bill which remained around the mid 6% level. This sustained bearishness caused yields to further expand by c.46bps across the benchmark curve compared to yesterday’s closing.

Contrary to OMO bills, we noted slight interest for longer-dated NTB bills especially for the July papers although very trades were consummated as offers stayed close to 2.10% level making it difficult to match much of the bids available at 2.50%.

We expect market bearishness to ease slightly with increasing interest, especially for the longer-dated OMO bills.

The interbank market heaved a sigh of relief, opening the day c.N102.33Bn positive as inflows of over N300Bn from CRR refund and SWAP maturities hit the system. This caused OBB and OVN rates to drop by 23.66% D/D. However, despite the inflows, most banks opted to remain at the SLF window rather than seeking funding from the interbank market.

We expect a further drop in rate tomorrow since the market does not expect any major debit to hit the interbank system at the close of the week.

The USD/parallel and cash market closed 0.20% higher compared to yesterday as Naira depreciated by an average of N0.75K at both windows. However, in the I&E interbank window, we saw the Naira appreciate slightly by N0.25K albeit dollar scarcity perseveres causing trade volumes to remain low with bank staying bided for the most of the trading session.

The NIGERIA Sovereigns strengthened today, although trading volumes stayed slim for the session. The bulk of the action was noted at the belly of the curve, especially on the 2031s, while yields compressed by an average of c.2bps across the sovereign curve. In the SSA space, the Angola papers pulled back some of the recent loses to outperform other SSA sovereign papers (Ivory Coast, Egypt and Ghana), as prices gained +25cents D/D on the 2025s.

The UBANL 2022s paper was the most active of the NIGERIA Corps tickers, as the yield on the paper weakened by approx. 10bps, while yields remained mostly unchanged on all other tracked papers.

Trading activities in the FGN Bond market improved today, albeit it was still a drab trading session with most of the action centred at...
Read more

Will the resumption of Int’l travels trigger convergence in the FX market?

The outbreak of COVID-19 in Nigeria prompted the government to halt non-essential international travels. However, beyond the aviation sector, this has to a large...
Read more
- Advertisement -