N500 billion was earmarked as intervention funds to fight COVID-19 while the health sector got N186 billion. In order to stimulate real sector activity, the President hinted that all MDAs will be allocated 50 per cent of their capital allocation by July ending. 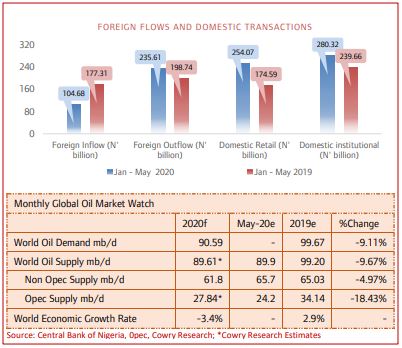 In the monetary sector, the Central Bank of Nigeria (CBN) depository corporations survey showed a 0.06% month-on-month (m-o-m) rise in Broad Money Supply (M3 money) to N35.72 trillion in May 2020.

Although the private sector should witness increased access to credit (amid ongoing expansionary monetary policies), we expect to see a tendency for the public sector to crowd out the private sector (with the possibility of increased borrowing rates – although to subdued by significant financial system liquidity) amid plans by the Federal Government to finance its fiscal deficit via increased domestic borrowings.

Refreshing Your Home On A Budget

Often in our lives, a saturation point arrives when we are no longer interested in the same old decoration patterns of our household's interiors....
Read more

During the previous week, the President presented the 2021 Appropriation Bill (themed, Budget of Economic Recovery and Resilience) to the National Assembly. Some of the...
Read more