Forty-four years after its establishment, the Federal Government, on Sunday, handed over the National Arts Theatre in Lagos State to the private sector for a complete revamp and modernisation.

The national heritage, sitting on an expansive land in Iganmu area of Lagos, became an eyesore, following years of facility deterioration occasioned by mismanagement and non-maintenance. 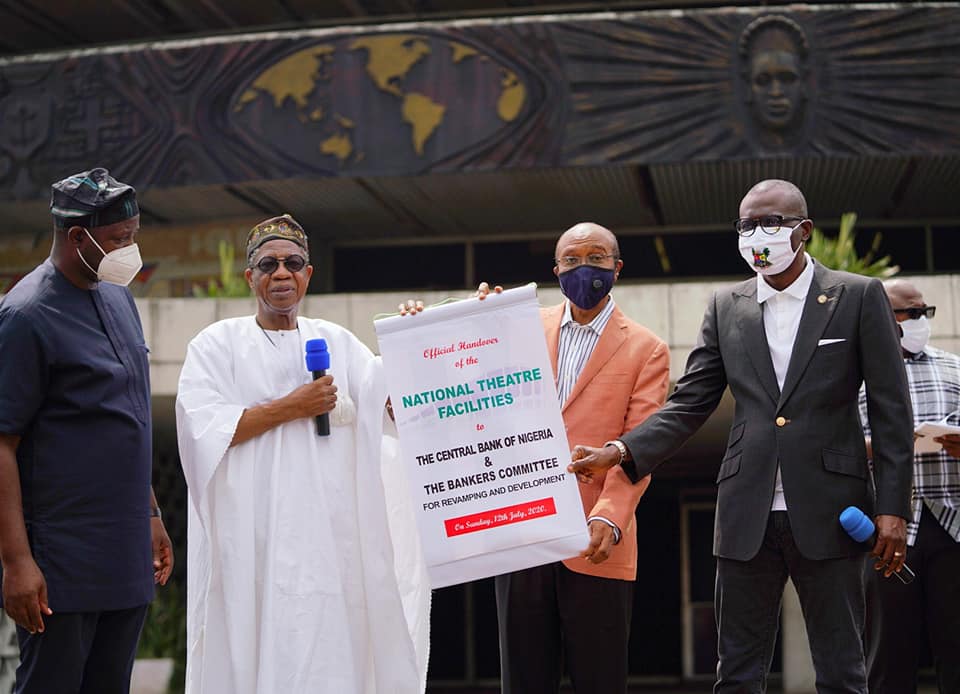 Moved by the need to restore the glory of the cultural edifice and turn around its capacity to develop the creative industry, President Muhammadu Buhari recently approved the regeneration of the theatre through a Public-Private Initiative.

Following the presidential approval, the handover event held on Sunday in the banquet hall of the theatre. 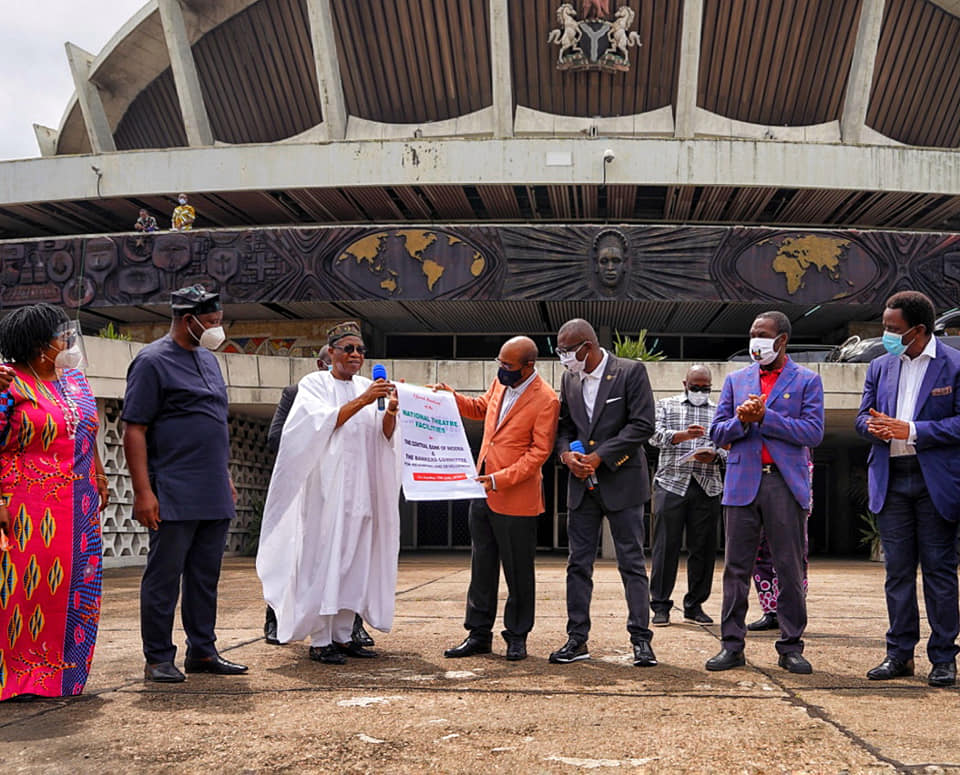 Minister of Information and Culture, Alhaji Lai Mohammed, officially transferred the monument to the Central Bank of Nigeria (CBN) and Bankers’ Committee – a team of private investors chaired by the Governor of CBN – for regeneration. The project is expected to be delivered in the next 18 months.

With the transferring of the theatre for revamping, Governor Babajide Sanwo-Olu said the effort had given the country an opportunity to harness its creative industry, which he described as a gold mine for revenue generation. He said Lagos, as a centre for innovation, would benefit hugely from the monument’s revitalisation. 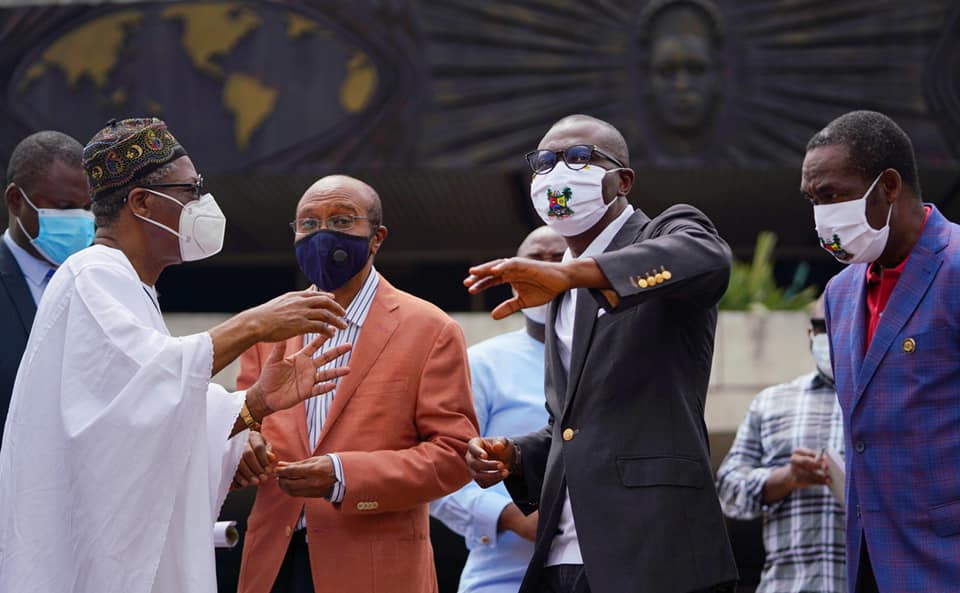 Sanwo-Olu said harnessing the potential of the creative industry remained vital to diversifying the national economy and transforming the Lagos economy to be 21st century compliant, adding that a modernised National Arts Theatre would empower innovative youth across the country to develop creative skills in fashion, performing arts, music and Information and Communication Technology (ICT).

He said: “As the Governor of the State where this national monument is sited, it gives me a great sense of joy to see the National Arts Theatre being revitalised. When the conversation around setting up the biggest black heritage started in the 1970s, Lagos was the centre of the discussion.

“It feels good to see that the conversation around revitalising the monument turning it around for the generations to come is taking place in Lagos. Every one of us growing up about 30 to 35 years ago knew what the national theatre stood for. Given that we have had good times in this monument, it would be shame on all of us if we didn’t do what we are doing today and leave this national heritage to die.”

Sanwo-Olu observed that before the move by the Federal Government to revamp the theatre, Lagos Government had deployed resources to modernise the areas around the monument, pointing out that the State built a Light Rail station in the theatre.

The Governor said the synergy between the State and Federal Government in equipping the monument with Light Rail station is an asset that would help in mass transportation in and out of the edifice when the revamping is completed.

He said: “There’s no way we can transform Lagos economy and make it 21st Century compliant if this national centrepiece is not re-engineered to develop our creative industry. Therefore, this revitalisation exercise speaks to our vision in the pillars of our development agenda.”

The Governor assured the investors and Federal Government that Lagos would be part of every process required to turn around the heritage.

Mohammed described the handover ceremony as “historic” in the annals of the creative sector, noting that President Buhari has achieved what his predecessors feared to do.

The Minister said the national theatre was established with the goal to enhance culture and generate revenue through creativity in performing arts. He regretted that the national monument was left to go moribund due to lack of maintenance and investment.

Mohammed said the revamping project was is a win-win endeavour for the Government and the private partners that took up the project.

He added that the Federal Government would continue to own the monument as a public asset, assuring that the regeneration exercise would not lead to employees’ retrenchment.

He said: “Contrary to what naysayers are peddling, no one is hijacking the National Arts Theatre. It remains our national heritage. This public-private partnership is a win-win for us. It will turn this iconic edifice into a modern masterpiece through which we will retain existing employment and create massive jobs for our youths. I urge all citizens to support the regeneration project so that we can bequeath a functioning national arts theatre to the coming generations.”

Mohammed said the revamping exercise would be carried out in two phases to restore the lost glory of the monument and implement the theatre’s detailed master plan.

The CBN Governor, Mr. Godwin Emefiele, said the partnership would transform the monument to world-class art and entertainment centre.

Emefiele said the handing over of the theatre to private investors was timely, given the challenges facing the economy that earns revenue from a single source.

The CBN boss said the nation had the potential to generate annual revenue of $20 billion from the creative industry, stressing that such could help cushion the effect of instability on the national economy.

Emefiele thanked the Lagos Government for creating an infrastructure around the monument, pointing out that the rail station would open the theatre up for seamless traffic.

He said: “Upon completion in another 18 months, this entire area would have transformed into a creative centre which will only be comparable to world-class entertainment and convention centres in this part of the world.

“Our goal to revamp this National Arts Theatre is to create an environment where startups and existing businesses can be rewarded for their creativity. When the renovation is completed, this monument will support skill acquisition and creation of jobs for over one million Nigerians over the next five years.”

Minister for Sports and Youth Development, Mr. Sunday Dare, said the partnership was another giant step by the Buhari administration to strengthen the youth and invest in their creativity.

“I commend the Bankers’ Committee for this new vision to engender a rebirth of the millennial economy. A modernised National Arts Theatre will help our young people to hone their skills and divest their energy to create values for themselves and the country,” Dare said.

The revamping of the monument is being handled by SANEF Creatives Limited. When completely revamped, cinemas of the modernised National Arts Theatre will now have digital screens and modern lighting system.

Its three exhibition centres and banquet halls would be completely regenerated. It will have a multi-storey car park, ICT incubation centre, cultural and entertainment hubs, including apparel factory, film village, and music hub for young musicians to have an opportunity to record.

The International Facility Management Association, Nigeria Chapter, has lauded the Federal Government’s initiative of handing over the National Theatre, Iganmu, Lagos to the Central...
Read more

The Minister of State, Industry, Trade and Investment, Aisha Abubakar, had explained that the Nigerian creative industry has the fastest growth rate in the...
Read more

GAC Motors, one of China’s largest automakers, is set to unveil the GS8, a c-level high-end SUV self-developed by GAC Motor in Abuja this...
Read more
- Advertisement -