In the just concluded week, the Federal Government indicated, in the 2021-2023 Medium Term Expenditure Framework and Fiscal Strategy Paper (MTEF/FSP) is presented to the National Assembly, that it’s proposed spending for the year 2021 would rise to N12.66 trillion, as against 2020 approved budget of N10.80 trillion. 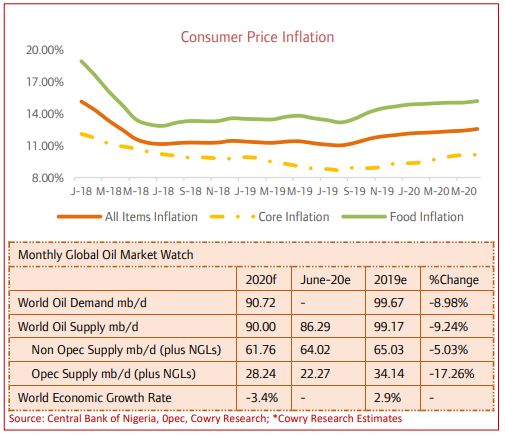 In another development, the Monetary Policy Committee (MPC) at the end of its meeting on Monday, July 20, 2020, voted to retain all policy parameters.

According to the Committee, the decision to hold all policy parameters was amid the need to allow time for the transmission effect of the cut in MPR in May 2020 to permeate the economy.

Read Also:  Nigerians May Escape from Anxiety with a Stronger Naira - LBS EXECUTIVE BREAKFAST SESSION, May 2017

The Committee noted that increasing MPR would counter its efforts and that of the fiscal authority to stimulate economic growth – as economic activities were dented by COVID-19 pandemic.

Notably, total gross credit increased to N18.90 trillion in June 2020, from N15.56 trillion in May 2020 as more credits were largely recorded in manufacturing, consumer credit, general commerce, information and communication technology, as well as agricultural sectors.

However, the Committee expressed concern over the rising inflation, stating that the unprecedented increase in public spending to support households and businesses, in the wake of the pandemic, could spur inflationary pressure as the supply shortfalls struggle to meet up with the demand build up.

The early submission of the 2021-2023 MTEF/SFP to the National Assembly should enable FG to present its 2021 budget on time and sustain Budget Cycle of January to December – an enabler of proper budget implementation.

This, coupled with the sustained expansionary programmes by the apex bank, should have a positive impact on Nigeria’s economy.

However, given the huge debt stock and the attendant rising debt service, FG needs to swiftly formulate and implement the right policies that will encourage private sector funding of capital projects.

MTEF Review: VAT increase could be a smoke screen for something larger

President Muhammadu Buhari provided a sneak peek into Nigeria’s fiscal direction for 2019 on Wednesday, 19 December 2018, as he presented the 2019 Budget...
Read more
- Advertisement -