Estimates from satellite data show global gas flaring increased to levels not seen in more than a decade, to 150 billion cubic meters (bcm), equivalent to the total annual gas consumption of Sub-Saharan Africa.

Gas flaring in fragile or conflict-affected countries increased from 2018 to 2019: in Syria by 35% and in Venezuela by 16%, despite oil production flattening in Syria and declining by 40% in Venezuela.

Gas flaring, the burning of natural gas associated with oil extraction, takes place because of technical, regulatory, and/or economic constraints. It results in more than 400 million tons of CO2 equivalent emissions every year and wastes a valuable resource, with harmful impacts on the environment from un-combusted methane and black carbon emissions. 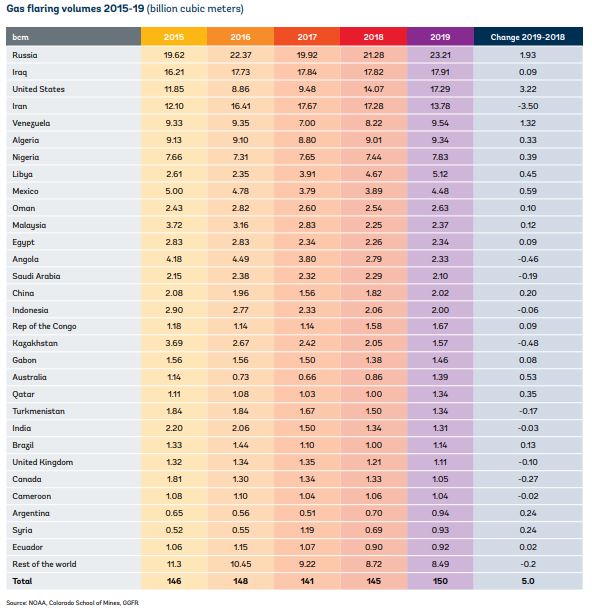 “The current COVID-19 pandemic and crisis brings additional challenges, with sustainability and climate concerns potentially sidelined. We must reverse this worrying trend and end routine gas flaring once and for all.”

The top four gas flaring countries (Russia, Iraq, the United States, and Iran) continue to account for almost half (45%) of all global gas flaring, for three years running (2017-2019).

When looking at all oil-producing countries, excluding the top four, gas flaring declined by 9 bcm (or 10%) from 2012 to 2019. In the first quarter of 2020, global gas flaring fell by 10%, with declines across most of the top 30 gas flaring countries.

“The World Bank and GGFR are committed to working with governments and industry to end this ‘sticky’ problem. We are working in many of the highest gas flaring countries in the world, helping them develop policies, regulations and practices to end routine flaring.

At the same time, we are garnering more commitments from governments and companies to end routine flaring through the Zero Routine Flaring by 2030 initiative. Now over 80 governments and companies, accounting for over half of the world’s routine flaring, have pledged to end this 160-year-old practice,” said Zubin Bamji, Program Manager of the World Bank-managed GGFR Trust Fund.

The data was released by the World Bank-managed Global Gas Flaring Reduction Partnership (GGFR), which is composed of governments, oil companies, and international institutions working to end routine gas flaring at oil production sites around the world.

GGFR, in partnership with the U.S. National Oceanic and Atmospheric Administration (NOAA) and the Colorado School of Mines, has developed global gas flaring estimates based upon observations from a satellite launched in 2012.

The advanced sensors of this satellite detect the heat emitted by gas flares as infrared emissions at global upstream oil and gas facilities. A new and improved web-based application will map global gas flaring data in a reliable, standardized way, and will be publicly available in 2022, with the support of the Oil and Gas Climate Initiative (OGCI).

For more information and a complete list of the governments, oil companies, and development institutions committed to “Zero Routine Flaring by 2030,” visit www.worldbank.org/zeroroutineflaring

For more information on GGFR and the new satellite flaring data, visit www.worldbank.org/ggfr

We are supporting public health interventions, working to ensure the flow of critical supplies and equipment, and helping the private sector continue to operate and sustain jobs.

We will be deploying up to $160 billion in financial support over 15 months to help more than 100 countries protect the poor and vulnerable, support businesses, and bolster economic recovery.  This includes $50 billion of new IDA resources through grants and highly concessional loans.