The FGN bond market opened the week on a very calm note with improved offers emerging across the benchmark curve, except on the 2022s maturity which remained scarce in the market.

We noted increased supply chasing fewer bids, as more bears appeared to take profit since it seems the demand for bonds as began to dwindle in the interim. Average yields moved c.69bps higher across the curve, while the 2035s, 2049s, and 2050s remained the most actively traded bonds in the market.

We expect trades to remain scanty in the near term, with some local investors expected to take advantage and cherry-pick improved offers. 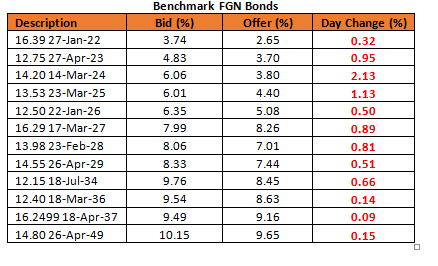 Activities in the OMO Bills space picked up in today’s session, opening the week with a slightly bullish sentiment especially on longer-dated OMO maturities. We noted sizeable interest by a few local banks which may be attributed to the lack of OMO auction as anticipated by the market.

The January bills saw most of the market activities trading around 4% levels, whilst the bid/offer spread on the  June 2021 OMO bills tightened but close enough to cross volumes. Thus, yields compressed further by an average of c.36bps across the benchmark curve

The NTB side continued to see lethargic activity, as retail-sized volumes were consummated on the long-end. Yields dropped by an average of c.20bps on the offer across the benchmark NTB curve.

We expect interbank system liquidity to fall which should most likely dampen demand for OMO bills in during tomorrow’s trading session. 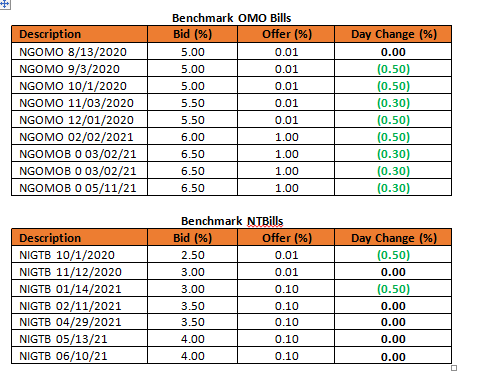 The Interbank system liquidity opened the week on a very buoyant level. However following the double special debit and late retail auction intervention that was announced we say interbank rates spike to double digits level thus increasing by over c.1000bps for both OBB and OVN rates which closed at 13.33% and 14.33% respectively.

For tomorrow, we expect the market to open on a calmer note since we are not anticipating any major funding need to hit the market.

The Naira gave up some of its recent loss at the IEFX window today, gaining 0.32% of its value to close at N388.00/$.  Although a very small volume ($17.23M) passed through that space, it remained lowly supplied in the market.

The CBN spot rate and SMIS rates remained unchanged again to close the day at N381/$ and N380.69/$ respectively. At the parallel market on the other hand, although the cash market remained unchanged we noticed an increase in the value of Naira at the transfer space appreciating by 0.50k which was majorly due to reduced demand in that window.

The NGERIA Sovereign tickers continued to rally, as demand strengthened amid slightly increased demand by local participants. Yields compressed further by c.10bps across the sovereign curve, with interests concentrated at the mid- (2031s) and long-end (2047s) of the curve.

The NGERIA Corps tickers were fairly quiet, except for ACCESS 21s which saw sustained demand interest and strengthened by – c.39bps on yield.

The FGN bond space saw a bit of calmness taking a break from the bearishness witnessed for the past couple of weeks as demand...
Read more