In the second quarter of 2020, as the local economy experienced a lockdown induced by the coronavirus pandemic, and businesses were closing, the official GDP data released earlier today confirmed what many market participants predicted. The Nigerian economy declined by 6.01% year-on-year in Q2’20, the first quarterly decline since Q1’17. Lower consumer demand and business spending, in our view, accounted for the decline. 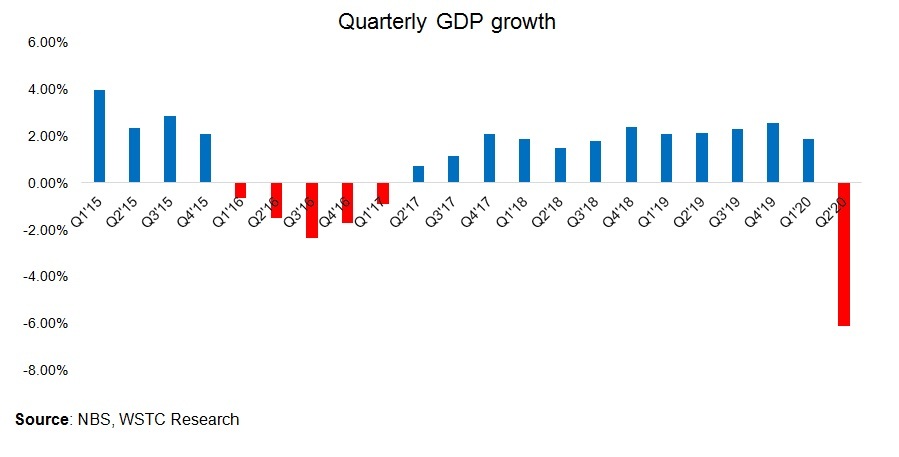 How the Top Sectors Fared

Of the top 10 sectors that contributed the most to total GDP, only three sectors recorded growth namely the Crop Production sector, Telecommunications & Information services, and the Financial Institutions sector. We attribute the growth recorded in the Crop Production sector to improved production, amid rising demand for local food given the resulting effect of the border closure. However, we posit that the growth recorded was nonetheless weak, in which we partly attribute to an initial slowdown in production levels due to the movement restrictions at the initial stages of the lockdown.

The work-from-home (WFH) directive by major corporates and the lockdown impact gave rise to the usage of digital alternatives for activities. Hence, the increased usage of data services and other forms of digital services accounted for the strong double-digit growth in the Telecommunications & Information sector.

The sector with the biggest hit was the Trade sector which declined by 17% YoY. In our view, as expected, the closure of the air space and land borders facilitated the decline in the Trade sector. The inability for free movements of goods and services due to the land border closure had taken its tool on the Trade sector in the past few quarters. The COVID-19 pandemic further exacerbated the pressures, therefore, leading the sectors that lost the most and significantly contributed to Q2’20 GDP decline.

Other major sectors that took a hit in Q2’20 include:

Construction Sector: Output declined by 32% YoY. The lockdown directive had an impact on the scale of construction in the economy. Due to the sit-at-home policy and the subsequent decline in economic activities, we believe that a slow demand resulted in the steep decline in the Construction sector.

Real Estate Sector: The Real Estate sector had been struggling consistently in the past few quarters, owing to macroeconomic vulnerabilities. In our view, the lockdown and decline in economic activities worsened the sectorial decline. Specifically, the Real Estate sector declined by 22% YoY in Q2’20

Food, Beverage and Tobacco Sector: The decline in the sectorial output resulted from the double-whammy of lower demand and disruption in supply chain due to the lockdown directive and decline in economic activities.

The released Q2’20 results came as a positive surprise to us (based on the outperformance relative to developed and emerging markets). Going forward, we expect to see an improvement in economic performance due to the steady rise in economic activities. However, we yet believe that the economy might not avoid a recession in Q3’20. Overall, we revise our FY’20 GDP forecast from -2.12% to -2.02%, reflecting our expectations of improved output levels in the subsequent periods of the year.