Local Appetite For Bonds Continues To Weight Yields Down.

The FGN bond market opened on a bullish note as market activities remained focused on the mid and longest-dated bond papers especially on the 2049s and 2050s maturities. These papers continue to garner market interest following the non-inclusion of the 2026s and 2050s papers in the October bond auction circular.

Bid/offer opened the day at 7.10/6.90 for the 49s and 50s maturities sliding down by an average of 17bps to close at 6.87%/6.83% although, by mid-day, we saw more offers largely spurred by actions from profit-takers causing yields to steady around the 6.83% levels on the offer.

We also saw few interests in the 2035s and 2045s papers which was offered at 5.30% and 6.10% respectively, although very few transactions printed as most of the bids stood around 25bps apart from the offers making it difficult to deal.

Tomorrow, we expect to see more actions from profit-takers which will likely cause rates to increase slightly especially at the belly and tail of the curve. 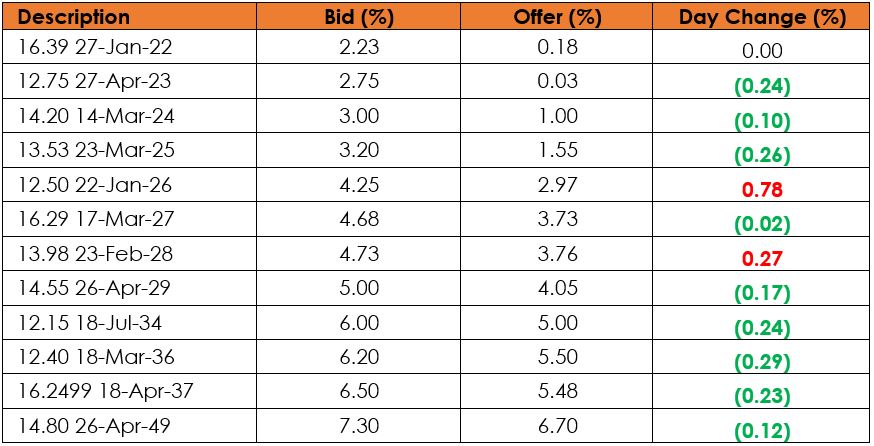 The OMO bills space opened and traded on a very quiet note as the market opened strictly one way (All bids and no offers). A few of the offers seen were on the 12th Oct maturity which traded around 1% level while some January papers were offered at 0.35%.

At the NTB space, we saw few poor offers for NTB September bills at around 0.70% although no transaction was consummated at these levels.

We expect the bills to remain very quiet with few trading actions given that the market is under-supplied.

The interbank system liquidity improved by c.64.85% to open the week at c.N771.83Bn following inflows from bond coupon payment and FAC by the apex bank. Consequently, dropping OBB and OVN rates to 1.00% and 1.88% levels respectively.

Interbank rates are expected to coast around these levels tomorrow as there are no funding needs required by banks to drive rates upward.

At the Interbank, most of the rates remained unchanged except at the IEFX window which saw an improved volume of c. $120m although still largely under-supplied compared to market demand with its rates depreciating slightly by c.17k.

The NIGERIA Corporates opened the week on a rather drab session as the market remained lowly supplied on most of the tracked papers.

FGN Bonds The Bond Market had a relatively quiet session, with some slight demand at short to- mid-end of the...
Read more
MEDIA OUTREACH

Local Appetite For Bonds Continues To Weight Yields Down.

The FGN bond market opened on a bullish note as market activities remained focused on the mid and longest-dated bond papers especially on the...
Read more

Next Multimillionaires in the Nigerian Financial Market

There are opportunities for most people who follow the simple rule we share in this article to achieve financial independence and become multimillionaires in...
Read more

MACROECONOMIC HIGHLIGHTS The inflation rate dropped to 16.10% in June from 16.25% in May, marking a fifth consecutive decline in inflation since January 2017....
Read more