The ceremony which was designed to sensitize stakeholders and citizens of the State took place at the Shield Hotel Jalingo.

Speaking, Governor Darius Dickson Ishaku said People living on the site of the Mambilla Hydro Power Project needs sensitization to allay the fears and negative thoughts of the populace on the project.

The Governor emphasized that the Electricity project was designed to take advantage of the potentials offered by nature which will create jobs for youths, boost tourism and agriculture. 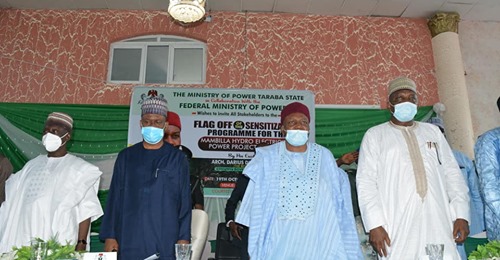 He thanked President Mohammadu Buhari for taking the bull by the horn to making sure that the project takes off.

Governor Darius Ishaku encouraged all stakeholders in the State to take advantage of the golden opportunity and avoid chaos during the program which includes sensitization, land demarcation, enumeration, compensation, resettlement and others.

Commenting, Minister of Power Saleh Mamman revealed that the program marks the kick-off of the program and called on stakeholders of the various Communities to galvanise their support for the implementation of the program.

Maman advised Tarabans to shun party differences for the sake of the project.
In his goodwill message, Chairman House Committee on Power, who was represented by the Member Representing Taraba North Shuaibu Isah Lau promised the resolve of legislators to legislate laws that would lead to the completion of the project.

Commenting, Chairman of the House of Representatives Committee on Power who was Represented by Sani Umar Bala maintained that the project when completed would boost electricity supply in the Northern part of the Country.

In his opening remarks, Commissioner of Power Badina Garba thanked Governor Darius Ishaku for creating the Ministry of Power and for appointing him as the Pioneer Commissioner.

He said the attention accorded the Ministry of Power has culminated to steady electricity in the State.

Badina disclosed that the sensitization program will start on twenty-first of October and will last for two weeks starting from Gembu in Sardauna Local Government Area.

In an Overview of the Electricity Project, Chairman of the Project Delivery Committee Farouk Yabo Yusuf disclosed that over forty millions of Nigerians have no access to electricity.

He stated that the Mambilla Electricity Project when completed would boost the economy of the State including mining, irrigation and social activities.

The high point of the program was the flag up off the Mambila Hydro Electric Power Project sensitization program by Governor Darius Dickson Ishaku.

The Taraba state government has banned the use of motorcycles in some towns and villages across three local government areas of the state.  This was...
Read more

Governor Darius Dickson Ishaku on Thursday signed the Taraba State 2021 Appropriation Bill into law.  At a short but impressive ceremony at the Taraba State...
Read more

The Taraba State government is to spend over 139 Billion Naira for both its recurrent and capital expenditure in the 2021 fiscal session. A breakdown...
Read more