Venture funding for blockchain and crypto companies totalled $897.7 million in Q3 2020. The funds went into 212 startups in the industry.

According to the research data analyzed and published by Comprar Acciones, August saw the highest amount of funding during the quarter, a total of $367.48 million. Comparatively, the July total was $299.42 million, while in September, the figure was $230.83 million.

Venture Funding into Blockchain and Crypto Companies in Q3 2020 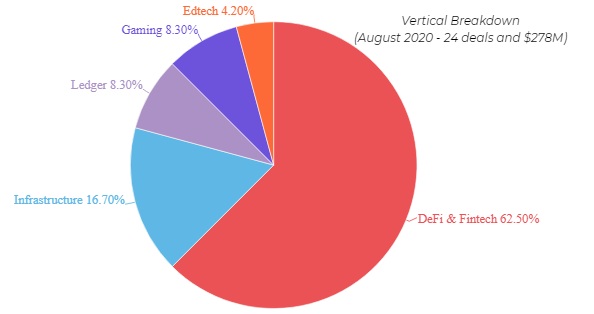 The most popular deal types in the three-month period were early-stage and seed deals, accounting for 42% of total funding. There were 60 seed and 59 early-stage deals all in all.

For early-stage deals, the average value was $7 million, totaling $272 million, equivalent to 30% of the total. On the other hand, seed deals averaged $2.1 million and accounted for 12% of total deals in the period.

According to Outlier Ventures, crypto funding in the month of August 2020 reached $280 million. Crypto thus accounted for over two-thirds of the aforementioned funding total during that month. There were a total of 24 deals, with median funding of $2.9 million across five verticals. DeFi & Fintech was the leading vertical accounting for 62% of all crypto deals.

$9 Billion Flows into Ethereum Thanks to DeFi, Highest Inflow Ever

In line with that, Q3 2020 also saw a remarkable acceleration in capital inflow into the industry, thanks primarily to yield farming movement and the DeFi hype. According to CoinGecko, $9.15 billion flowed into Ethereum courtesy of its thriving DeFi scene. This was its largest inflow of capital on record since its inception. 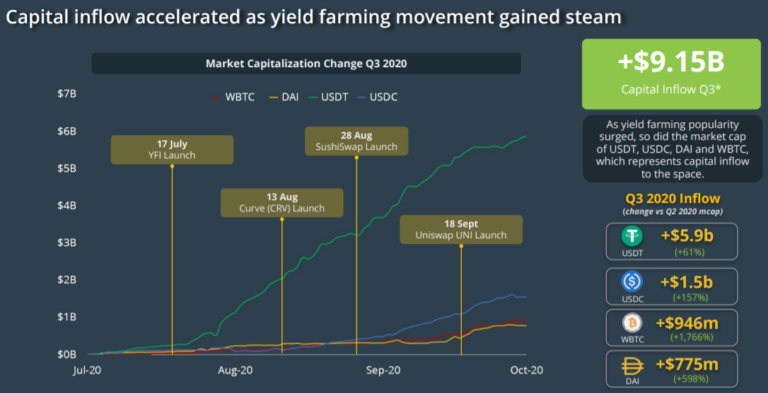 As a result of the accelerated capital inflow, Tether (USDT) grew its market cap by an impressive $5.9 billion in Q3 2020. This translated to a 61% increase quarter-over-quarter (QoQ). US Digital Coin (USDC) saw an increase of $1.5 billion on its market cap, posting a 157% QoQ increase.

Wrapped Bitcoin (WBTC) saw the highest growth in market cap, which was at 1,766%, following an increase of $946 million. DAI also grew a remarkable 598%, equivalent to $775 million.

DeFi and yield farming also boosted trading volumes for decentralized exchanges (DEX). Between July and September, trading volume on the top 10 DEX grew a whopping 700% year-over-year (YoY). It went from $3.8 billion to $30.4 billion.

Read Also:  Own a Family Home in 90 Days & Get Amazing Prizes in the Family Fortune Promo by Access Bank

Uniswap and Curve were the dominant DEX platforms during the period, accounting for 80% of the market share. Uniswap’s market share grew from 47% in July to 63% in September. In the same duration, Curve saw its market share drop from 24% to 17%. Sushiswap joined the ranks in September and managed to capture an 8% market share.

In August, total trading volume nearly doubled to $327.2 billion, with DEX volume amounting to $12.3 billion. Though growth slowed down in September, DEX volume more than doubled to $30.4 billion from the $330.6 billion total.

Bitcoin’s inability to reap from the DeFi boom caused it to lose a 6.6% market share during Q3 2020. By the end of the quarter, the king of crypto had a 62.3% market share.

All in all, DeFi tokens outperformed the market from Q1 to Q3 2020, only slowing down during the September market pullback. A comparison of these tokens to the top five cryptocurrencies by market cap puts their massive growth in perspective.

However, in September, the DeFi market pulled back and most tokens suffered double-digit losses month-on-month. LEND posted a 28% decline while YFI dropped by 32% and UMA lost 60% of its value.

On the other hand, Bitcoin and Ethereum slumped by 8% each, Ripple by 15% and Bitcoin Cash by 17%. Binance Coin was the only crypto in the top 5 to record gains, growing by 26% month-on-month.

The Blockchain industry has come a long way in redefining how people make money, spend money and store money; starting with Bitcoin, the pioneer...
Read more

The cryptocurrency libra, proposed by social media giant Facebook, is reportedly preparing to launch as early as January next year. However, only a limited...
Read more

On Wednesday, November 18, 2020, the price of bitcoin has been coasting along at levels not seen since the decentralized currency’s all-time high three...
Read more
- Advertisement -