November 30, 2020 – The European Commission (EC) has extended the marketing authorization for Dupixent® (dupilumab) in the European Union (EU) to include children 6 to 11 years of age with severe atopic dermatitis who are candidates for systemic therapy. Dupixent (often known as eczema) is the only systemic medicine approved in the EU to treat these patients.

“As the parent of a child with atopic dermatitis, and someone who works with families impacted by this condition daily, I’ve seen first-hand the enormous physical and mental health burden of this disease, and the toll it can take on the entire family,” said Korey Capozza, MPH, Founder and Executive Director of Global Parents for Eczema Research (GPER). 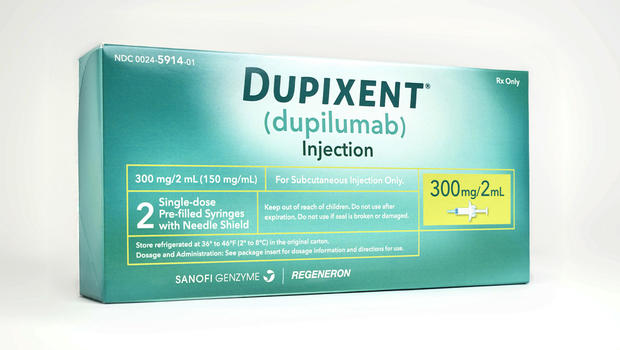 “Young children with severe atopic dermatitis currently have few treatment choices and significant unmet needs. We welcome the addition of new medicines for these underserved patients.”

Atopic dermatitis is a chronic inflammatory disease of the skin that can be debilitating, and severe disease can significantly impact many aspects of life for both children and their families.

The current standard of care for children with severe atopic dermatitis in Europe is limited to topical treatments, leaving those with the poorly controlled disease to cope with intense, unrelenting itch and skin lesions that can cover much of the body, resulting in skin cracking, redness or darkening, crusting and oozing. In addition, uncontrolled severe atopic dermatitis can have a substantial emotional and psychosocial impact, causing sleep disturbance, symptoms of anxiety and depression and feelings of isolation in children.

“The approval of Dupixent for children in Europe marks another significant milestone for atopic dermatitis patients and their families, broadening the availability of a first-in-class medicine that offers a proven safe and effective treatment for this debilitating skin disease,” said John Reed, M.D., PhD, Global Head of Research and Development at Sanofi.

“Dupixent’s ability to provide significantly clearer skin, and clinically meaningful reduction of persistent itch, address important unmet needs for these children. In addition to atopic dermatitis, we continue to investigate the potential of Dupixent in younger age groups and across a variety of type 2 inflammatory diseases.”

Dupixent is a fully-human monoclonal antibody that inhibits the signalling of the interleukin-4 (IL-4) and interleukin-13 (IL-13) proteins and is not an immunosuppressant. Data from Dupixent clinical trials have shown that IL-4 and IL-13 are key drivers of the type 2 inflammation that plays a major role in atopic dermatitis, asthma and chronic rhinosinusitis with nasal polyposis (CRSwNP).

“This approval for Dupixent in the EU represents a major advancement for children with severe atopic dermatitis and their families, who spend countless days and nights tending to their child’s disease with few treatment options to help alleviate the debilitating symptoms,” said George D. Yancopoulos, M.D., PhD, President and Chief Scientific Officer at Regeneron.

“Dupixent is a novel therapy that addresses a root cause of atopic dermatitis by specifically targeting the underlying type 2 inflammation of the disease. Dupixent has already been used by hundreds of thousands of patients around the world, including those with atopic dermatitis as well as other type 2 inflammatory diseases such as asthma and adults with chronic rhinosinusitis with nasal polyps.  We are pleased to bring this paradigm-changing medicine to even younger patients in the EU who need new options beyond steroids or immunosuppressants.”

The EC decision is based primarily on data that includes pivotal Phase 3 efficacy and safety results of Dupixent combined with topical corticosteroids (TCS) compared to TCS alone (placebo) in children 6-11 years with severe atopic dermatitis. At 16 weeks, patients in treatment groups of Dupixent 300 mg every four weeks (N=122) or 200 mg every two weeks (N=59) with TCS experienced:

The safety profile of Dupixent in children 6-11 years of age followed through week 52, based on an open-label extension trial, was similar to the safety profile observed at week 16 and consistent with the safety profile seen in adults and adolescents with atopic dermatitis. Overall rates of adverse events (AEs) were 65% and 61% for Dupixent every four and two weeks respectively, and 73% and 75% for placebo.

The co-primary endpoints in the pediatric trial were skin clearance, as measured by a score of 0 or 1 on the Investigator’s Global Assessment (IGA), and disease extent and severity, as measured by Eczema Area and Severity Index score (EASI-75).

Read Also:  Flexitarian diets could be the most beneficial to health

Secondary endpoints included the average change in EASI score from baseline, and itch as measured by at least a 4-point reduction in itch intensity on a 0 to 10-point scale (weekly average of daily Peak Pruritus Numerical Rating Scale). Additionally, HR-QoL was measured by the proportion of patients who achieved at least six points on the patient-reported Children’s Dermatology Life Quality Index (CDLQI), as well as additional measures from Patient-Oriented Eczema Measure (POEM) and SCORing Atopic Dermatitis (SCORAD).

Dupixent is approved for specific patients with atopic dermatitis, asthma and/or in adults with CRSwNP in a number of countries around the world, including the European Union, U.S. and Japan. Dupixent is currently approved in more than 60 countries, and more than 200,000 patients have been treated globally.

Dupixent is intended for use under the guidance of a healthcare professional and can be given in a clinic or at home by self-administration after training by a healthcare professional. In children younger than 12 years of age, Dupixent should be administered by a caregiver. No initial lab testing or ongoing lab monitoring is required with Dupixent treatment in any approved indication or age group.