Market appetite for bonds dropped further compared to Friday as most market participant continues to anticipate the special OMO credit as advised by the Apex bank, which is expected to set a new direction in the fixed market as a whole.

Trading activities dragged for most of the trading hours as dealers preferred to stay on side-lines observing market movement and reactions in line with the outcome of these CRR OMO credits that are expected to hit the system. 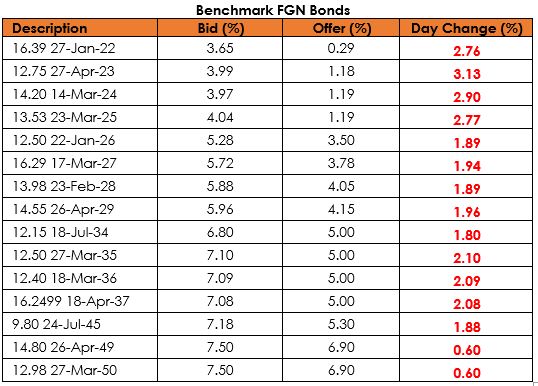 The bears were mainly slated at the belly of the curve especially on the 2036s and 2037s papers which was offered around the mid 5% levels while bids stood c.150bps apart for these quoted papers. The 2049s and 2050s papers were offered at 6.90% levels albeit no-bid to match these offers.

We expect this uncertainty to persist until the much-anticipated bill is credited into the system, Albeit the market ATM poses a good buy opportunity for local investors who are seeking to invest their loose funds.

The Treasury Bills traded one-way today all bears no bulls although largely concentrated mid-long dated papers. March and June bills were offered at 0.30% levels while Oct-Nov bills were offered at 0.50% levels. At the early hours of trading, we saw few aggressive bids in small volumes at the 1.20% level for the march bills but snoozed off quickly.

We expect the market to stay calm in the interim although supply will mostly increase across the curve.

Money market rates dropped by c.240bps in today’s session compared to Friday’s level, supported by the low immediate funding pressure in the market. System liquidity opened the session at N258.07Bn (c.64% lower D/D), while the OBB and OVN rates closed at 1.42% and 1.67% respectively.

We expect rates to remain stable in the interim, as there are no major outflows expected to hit the market in the course of the week.

The IEFX window continues to receive steady flows from the Apex bank although still poorly supplied compared to demand as rates ranged between N395/$1-N396/$1. The Cash/Transfer window also saw slight relief compared to Friday appreciating by an average of N2.5k to close the day at N471/$1 and N487/$1 respectively.

We expect that the continuous intervention from the Apex bank in the IEFX window would most likely induce the appreciation of Naira in the parallel market in the short-term.

Although the demand for Sub-Saharan papers remains high especially for NIGERIA Sovereigns, we saw less aggressive bids compared to Friday as buying pressure slowed down across the curve. Most of the market juice stayed at the belly and the tail of the curve where yield chasing investors seem to focus most of their attention. Despite the market appetite, we saw yield expanded slightly across the curve at around +9bps.

The NIGERIA Corporates had a less active session, although we noted few market interests on FBNL 2025s and ETINL 2024s papers as the improved pocket demand on these papers was matched by the supply seen.

The FGN bond market kicked off the new week on a sluggish note, with light trading volumes consummated in the market despite bond coupon...
Read more

The FGN bond space opened the new week on a drab note dragging for the most significant part of the trading session. Most Market...
Read more

It was a tale of two at the FGN bond space today, as the bond spaced opened the week generally bearish with the market...
Read more

The FGN bond market continued on its sluggish note, opening and trading on a very drab note. The belly of the curve weakened aggressively,...
Read more
- Advertisement -