The G-Class has been manufactured since 1979, and now this off-road icon has hit the milestone of 400,000 models produced. To mark this anniversary, a red Mercedes-Benz G 400 d (combined fuel consumption: 8.9-8.7 l/100 km, combined CO2 emissions: 235-229 g/km rolled off the production line in Graz. The car is headed to a long-term customer from the Rhineland who has been a fan of this angular classic since 1979 and now has around 20 models. His motto? “I can’t be without the G.”

“We are so proud to have produced 400,000 of these off-road vehicles. We’d like to thank our loyal customers and fans, plus our employees – not to mention our production partner in Graz, Magna Steyr. At present, demand far exceeds the production capacity available,” emphasises Dr Emmerich Schiller, head of the Off-Road Vehicles division and CEO of Mercedes-Benz G GmbH in Graz/Austria. 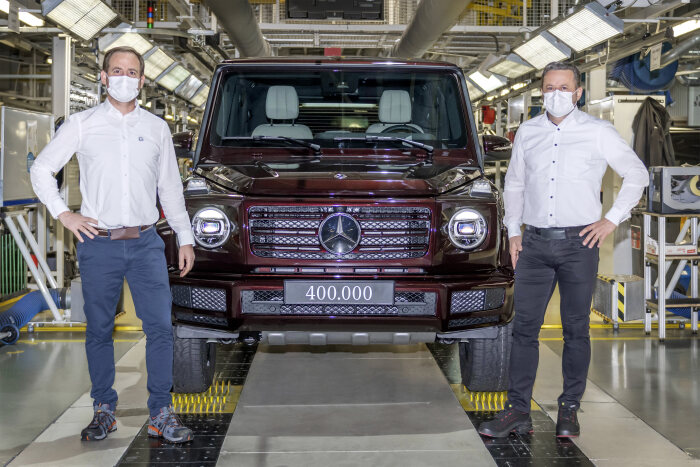 “And we’re already writing the next chapter in this success story: we’re electrifying this series so the G will have a zero-emissions future, making our icon future-proof.”

The G sub-brand plays a key role in the strategic realignment at Mercedes-Benz. This realignment focuses on a convincing luxury experience that’s electric, software-driven and sustainable. As far as this latter point goes, Mercedes‑Benz is bringing its suppliers on-board for its journey towards being carbon neutral.

The production partner for the G-Class, Magna Steyr in Graz, is particularly important in this regard. As at all Mercedes-Benz AG plants, Magna Steyr’s manufacturing will be carbon-neutral by 2022. Alongside protecting the climate, protecting resources is a top priority. Reducing water consumption and minimising waste, including boosting recycling rates, are core components of Magna’s sustainability strategy, too.

The new run of the G-Class started in top form in summer 2018. Whether on or off the road and whatever the operating conditions, the off-road vehicle impresses with its performance, cutting-edge assistance systems, outstanding handling, and safety.

At the same time, the new suspension, the DYNAMIC SELECT driving programmes, the “G-Mode” and the three 100-per cent differential locks enhance not only ride comfort but also agility – on any surface.

Since its manufacturing date of 1 September 2020, the standard equipment for the iconic off-road vehicle has become even more extensive. At the same time, there are also more personalisation options available through the “G manufaktur” programme.

This programme has found favour: at present, around 60 percent of all G-Class buyers opt for one of these types. New exterior colours and equipment packages as well as the widescreen cockpit, which now comes as standard, round off the model’s offering.

Since spring 2020, customer and fans have had the chance to explore the on-road and off-road ability of the G-Class at the new G-Class Experience Center near Graz. On the site formerly used by Fliegerhorst Nittner, they get the opportunity to fully test out the enormous potential of the G-Glass, hone their driving skills on terrain that is at times extreme, and experience first-hand what the “Schöckl proved” quality stamp means.

Graz’s own mountain, the Schöckl, is home to the legendary test track on which the G-Class has to prove its worth during the development phase.

The history of the G-Class

The G-Class is the top model among luxury off-road vehicles. It is not only the passenger car model series with by far the longest production run in the history of Mercedes-Benz, but also the forefather of all SUVs bearing the three-pointed star – this is why all Mercedes off-road models feature the upper-case G in their name.

What began in 1972 with a collaboration agreement between then Daimler-Benz AG and Steyr-Daimler-Puch in the Austrian city of Graz is now a story peppered with superlatives and significant milestones. The first concept to be developed was already different.

The team designed a vehicle which impressed with superior off-road capability, while at the same time appealing to customers as a full-featured and safe vehicle suitable for recreational purposes. All-wheel drive and 100-percent differential locks have also been part of the “G” since that time, as has the robust ladder-type frame.

At the time of its market launch, in the spring of 1979, it was available with a choice of four engine variants covering a performance spectrum of 53 kW/72 hp to 115 kW/156 hp. Customers had the option of a Cabriolet with a short wheelbase or Station Wagon models with a short or long wheelbase.

In 1989 the vehicles of the model series 463 marked the beginning of an evolutionary process for the off-roader that was not just about keeping pace with technical progress. It was an evolution that also brought a steadily expanding fan base and emphasised its character as an exclusive vehicle for any occasion. And, since 1993, a vehicle with an official name: the G-Class.

The G-Class models used for the “Popemobile” are famous around the world. The first of these representative cars for the head of the Catholic Church was the Mercedes-Benz 230 C off-road vehicle, featuring a mother-of-pearl finish and special glass construction. It accompanied Pope John Paul II on all kinds of trips from 1980 onwards.

The 25th anniversary of the G-Class was marked by the arrival of a very special model on the market, honed by Mercedes-AMG: the G 55 AMG Kompressor. Its eight-cylinder power unit (350 kW/476 hp, 700 Nm of torque) gave the robust off-roader an unprecedented level of performance and demonstrated the tremendous potential of the G-Class.

The G 500 4×4² of 2015 added not only a luxurious interior to the equation but also ground clearance of 45 centimetres and impressive off-road performance.

Thanks to the Mercedes-Maybach G 650 Landaulet, the iconic “G” reinvented itself once more in 2017. With its superlative V12 engine, portal axles, electric fabric top and exclusive equipment specification in the rear compartment, this very special all-terrain vehicle, which is limited to 99 units, meets the expectations of customers who demand the very highest standards of their vehicle. Arguably the most exclusive form of open-air driving pleasure.

The stated figures are the measured “NEDC CO2 figures” in conformance with Article 2 No. 1 Implementing Regulation (EU) 2017/1153. The fuel consumption figures were calculated based on these figures. A higher figure may apply as the basis for calculating the motor vehicle tax.

Anniversary for the Mercedes-Benz G-Class: 40 years of the G-Class rocks!

For 40 years the Mercedes-Benz G-Class has been the measure of all things in the off-road-vehicle segment, and for 20 years as an AMG...
Read more
- Advertisement -