At the FGN bonds space, the market opened the week on a quiet note as we saw a slight pull-back from the recent weakness. These may be likened to the cut in the latest bond auction circular, which was offered 20Bn lower than last month, and the possible outcome of the bond auction scheduled to hold this week.

Nevertheless, yields compressed by an average of 67bps across the benchmark curve.

We expect market activity to remain weak during tomorrow’s trading session as market attention shifts to the outcome of the bond auction scheduled to hold on Wednesday. 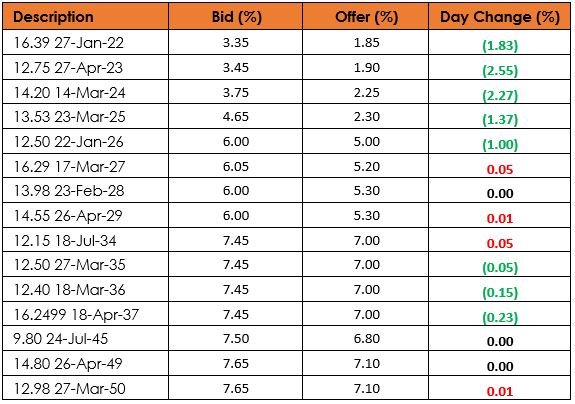 Following the double auction (NTB and OMO) outcome held last week, we saw rates retraced across all maturities in the bills space, increasing aggressively across the curve. Although the market isn’t trading at the auction levels, we saw tangible improvements in rate crossing over from the sub-one levels for the latest 1year issue.

The latest one-year OMO/NTB bill issue stayed offered around 1.20%, although bids stood far apart at 1.70%, making it difficult to close, we also saw the interest for Jan- April bills, which was mainly offered around 0.30%.

Tomorrow, we do not expect any immediate change in market mood to trading; however, we might see a bit of cherry-picking, especially on long-dated bills offered at attractive levels.

The interbank market opened the new week still adequately liquid, closing the day at approximately N382.66bn positive. However, we saw a slight movement in OBB and OVN, increasing by an average of c.19bps to close the day at 0.67% and 1.08%, respectively.

We expect rates to remain low close but reverse towards the end of the week as debits from bi-weekly retail auction and bond auction hit the system.

The Nigerian IEFX window was relatively stable, with rates depreciating slightly compared to Friday’s closing, although the volumes traded at this level were very scanty.

The NIGERIA Corporates opened the week on a rather drab session as the market remained lowly supplied on most of the tracked papers.

The FGN bond market kicked off the new week on a sluggish note, with light trading volumes consummated in the market despite bond coupon...
Read more

The FGN bond space opened the new week on a drab note dragging for the most significant part of the trading session. Most Market...
Read more

It was a tale of two at the FGN bond space today, as the bond spaced opened the week generally bearish with the market...
Read more
- Advertisement -