GOtv Nigeria: Bridging the Gap between Local and International programming

If anything has worked for the GOtv Nigeria brand since it came on the Nigerian video entertainment scene, it was market understanding. From day one, the brand promoters were quick to identify consumer expectations and focused on the brand’s reputation to deliver all that was promised. 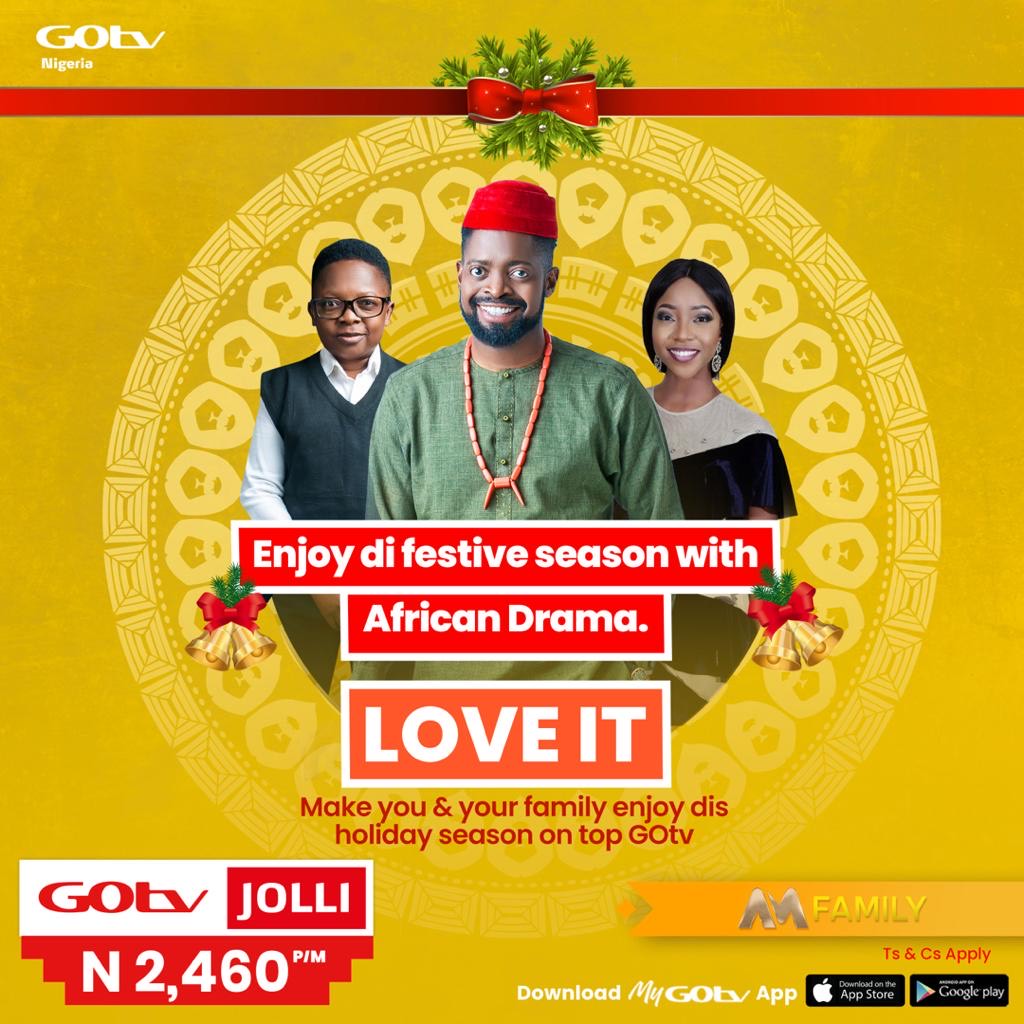 Four years ago, handlers of brand GOtv Nigeria, had rolled out fresh campaigns that further re-established the brand essence of the pay-TV Company. As a platform that was introduced to democratize the market, a new set of campaigns were tailored towards consolidating its brand promise and aspiration.

With appropriate visual illustration and captivating messages, the campaigns played up the proposition of GOtv Nigeria as well as speaking directly to the patrons of the brand. To further position the pay-TV Company as a family entertainment platform, the creative work touched on Africa Magic, Sports, Movies and other areas of interest. 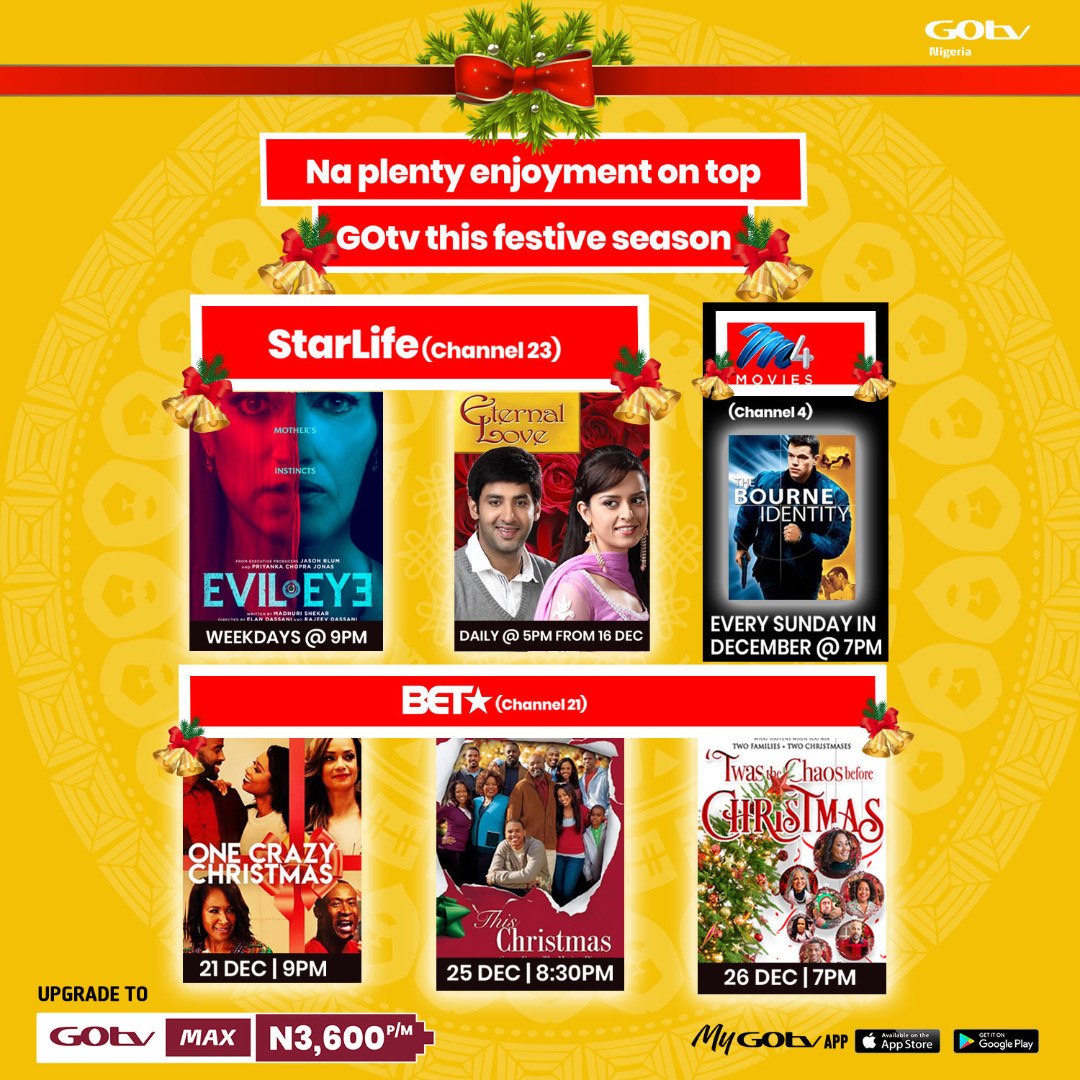 For instance, one of the campaigns; ‘TV Wey Go Totori You’ was cleverly used to celebrate the Africa Magic, which over the years has reconnected Africans with their culture through indigenous home videos and programmes that focuses on African culture and heritage.

Another one; ‘TV that Gets You Energised’ was deplored to capture the sports channels on the platform. This was also believed to be strategic, considering the positive attitude of Nigerians to sports, especially football. For Nigerians who have passion for foreign movies, ‘the third one; ‘TV that Gets You Glued’ reflected on the international posture of the platform.

Aside from the messages and illustrations, the words were domesticated to create an emotional connection between the brand and the target audience.

Through the campaign, GOtv promoters further showcased their strategy using local lingo, slangs and landmarks which their audience could relate with.

Today, with a myriad of stories to be told, diverse audiences to reach and an abundance of talent across the continent, GOtv is still being positioned as a platform that brings about impactful and inspiring content across several channels.

Though not without resistance from competition but in the overall assessment, the brand appears to be holding tight to its share of the market. For instance, since the arrival of GOtv and Startimes, competition in the pay-TV market has assumed a new trend. The two, which appeal to the mass market, have always competed with content to woo patrons.

Besides, the market prior to the arrival of the two, has today witnessed tremendous growth in consumer promotion deployment, brand activation, thematic and tactical creative campaigns and actual share of voice in the media.

To this end, pundits believe that the marketing antics of the two brands in the market would take a while to abate. But the exciting part of the whole episode is that consumers are at the centre of this epic battle.

First, GOtv broadcasts what analysts describe as the best of football from top international football leagues such as La Liga, Serie A and select matches of the Premier League, UEFA Champions League and Emirates FA Cup at an affordable rate.

It has also continued to play an important role in giving local talent a platform to tell African stories and to act as a reflection of African communities and their families, instilling pride not just locally but globally.

These local contents have continued to promote Nigeria’s rich cultural heritage, customs, and traditions. For instance, Africa Magic has dedicated channels on GOtv for the local language entertainment namely; Africa Magic Yoruba, Africa Magic Igbo and Africa Magic Hausa. In all, the pay-TV brand currently has over 30 local channels across different genres, including news, movies and general entertainment on its Max package.

Perhaps in a desperate move of the GOtv brand to show its commitment to promoting Nigeria’s heritage, in the last few years, the brand has made diverse cultural content available across its platforms for viewers, with a variety of local programmes.

Some of the programmes include; ‘Big Brother Naija’ ‘Tinsel’, ‘Hotel Majestic’, ‘Hush’, ‘Jemeji’, ‘Forbidden’ and ‘Eve’. Others are; ‘The Johnsons’, ‘Ajoche’, ‘Halita’, ‘Flatmates’, ‘Ajoche’ amongst others.

With its launch, the Digital-Terrestrial-Television (DTT) service platform premiered the advanced DVB-T2 decoders with better digital broadcasting standard, thus fast-tracking Nigeria’s march towards digital migration and technological evolution of broadcast television along with the premium content which is offered.

Since then, the ongoing digital migration has seen an upsurge in pay-TV subscribers in search of quality digital content. The prediction is that pay-TV subscribers will rise to 47 Million by 2025, up from 30 Million at the end of 2019.

GOtv Nigeria has continued to upgrade its content adding more channels on its packages without a significant increase in subscription in comparison to content acquisition and other satellite maintenance costs. This was certainly a necessary business move put in place to satisfy the ever-increasing taste of customers for premium content.

Nine years after establishment, GOtv signal has gone beyond Ibadan, where it was first launched and is now available in several cities in major states of the country, offering different packages at varying price points.

10 Reasons We are Loving GOtv this December

The holidays are in full swing and it is the season to be jolli! There are so many reasons to love this time of year...
Read more

In two days, a new cooking and lifestyle show will debut on GOtv, the digital terrestrial television platform from MultiChoice Nigeria. Titled 'Jollof With...
Read more

Nigeria’s aspiration to digitise her television broadcasting began in 2008 when the then government announced a plan to implement digitisation of the country’s analogue...
Read more

In 2011, MultiChoice gave an open invitation to Nigerians to get on the digital train and access superior audio-visual quality and top-tier entertainment at...
Read more
- Advertisement -