In furtherance of the current Ekiti State Administration’s Zero Tolerance Policy for Sexual Violence Against Children, the Governor, Kayode Fayemi has signed Compulsory Treatment and Care for Child Victims of Sexual Violence Bill 2020 into law.

The bill titled “Compulsory Treatment and Care for Child Victims of Sexual Violence Bill, 2020.” makes it compulsory for every hospital in Ekiti State whether public or private to accept for adequate treatment, any child who is a victim of sexual violence. This is against the background of increasing cases of rape and child defilement in the State. 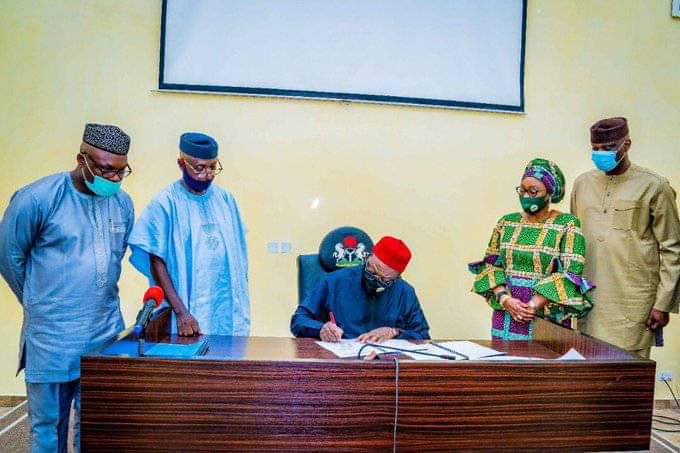 The prompt enactment of the Compulsory Treatment and Care of Child Victims of Sexual Violence Bill, said, importantly, this provides a legal framework compelling all hospitals in Ekiti State, public; private to provide adequate and prompt treatment for any child who has been sexually assaulted and to swiftly bring it to the notice of the Police amongst others.

By this Legislation, Ekiti State becomes the first State in Nigeria to enact a Legislation that specifically enforces compulsory medical treatment for child victims of sexual violence.

Ekiti State had previously opened a register for sex offenders to capture the identities of persons convicted of rape, child defilement and sexual assault in the state.

The State has also on several occasions’ named and shamed sex offenders by publishing their pictures on government social media platforms.

Nigeria launched its first national sexual offenders register on Monday, setting up a database of those convicted for sexual violence in a move seen...
Read more

In commemoration of this year’s International Women’s Day, Women at Risk International Foundation (WARIF) has taken a strong stand against rape and sexual violence...
Read more

Following the success of the first cycle of its Boys’ Conversation Café (BCC) Initiative, Women at Risk International Foundation (WARIF), has kicked off the...
Read more
- Advertisement -