A deep dive into the report shows that core inflation (inflation fewer seasonalities) increased sharply by 0.32% to 11.37% compared to a reduction of 0.09% in November. This indicates that the spike in headline inflation is not driven by seasonal factors alone.

It validates the notion that the continued rise in inflation is due to the combined effects of exchange rate pass-through, higher logistics costs (PMS), electricity tariff hike among others. High powered money and the funding of the FG overdraft estimated at N11trn are also inflation stoking factors.

Meanwhile, the relatively stable month-on-month inflation rate (1.6% – annualized at 21.11%) suggests that the spike in the annual price level was partly driven by base year effects. Output levels in December 2020 were much lower compared to December 2019 due to the COVID disruptive effects. 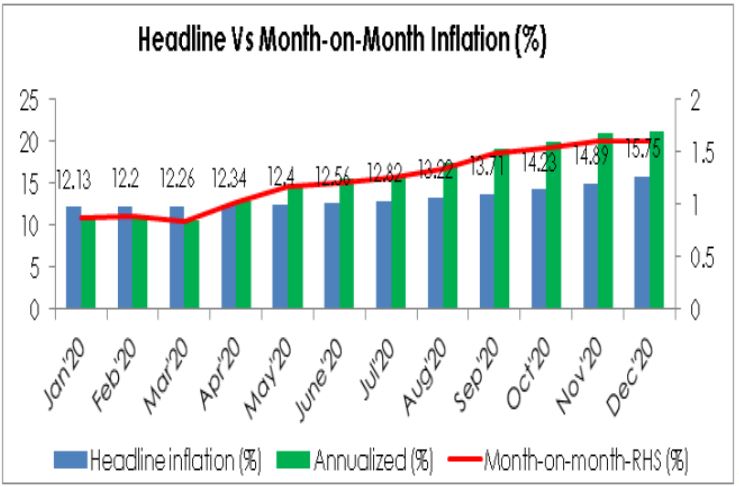 The unrelenting rise in inflation will be a major issue at the MPC meeting later this month. The CBN cannot be oblivious to a rate of inflation which is now almost 7% above the upper limit of its inflation range (6-9%).

It, therefore, may consider tightening before the meeting or symbolically increasing the rates of its special bills, currently at 0.5%p.a. The naira had wobbled throughout 2020, partly as a result of the wide gap between the rate of inflation (15.75%) and basement level rate of 0.5%p.a on 91-day T/Bills.

The FGN has also announced plans to securitize its overdraft at the CBN, roughly estimated at N11trn (30.14% of the money supply). This means more securities available for institutional investors and a possible increase in interest rates.

In December, core inflation (inflation less seasonalities) increased sharply by 0.32% to 11.37% on an annual basis and by 0.39% to 1.1% on a monthly basis. This suggests that the transmission effect of the petroleum price increase and electricity tariff hike is gradually reflecting in commodity prices.

The highest increases were recorded in prices of passenger transport by air and road (higher logistics costs and a pickup in travel demand), pharmaceutical products, medical and artisan services like vehicle maintenance and repairs as well as hairdressing salon costs.

Analysts had expected the reopening of the land borders in December to boost output levels and gradually ease supply constraints. However, food inflation has remained stubbornly high, crossing the 19% threshold to a 37-month high of 19.56% in December 2020.

On a month-month basis, the food index inched up 0.01% to 2.05%. The marginal increase in the monthly food sub-index reveals the gradual impact of the harvest (tomatoes and onions).

Meanwhile, the spike in the annual food component largely explains the base year effects on commodity prices i.e. output levels in December 2020 were low compared to December 2019, caused by the COVID-19 disruptive effects.

Also, the impact of border re-opening was limited by forex illiquidity. The commodities that recorded the highest price increases were bread and cereals, potatoes, yam and other tubers, meat, fruits, vegetable, fish and oils and fats. 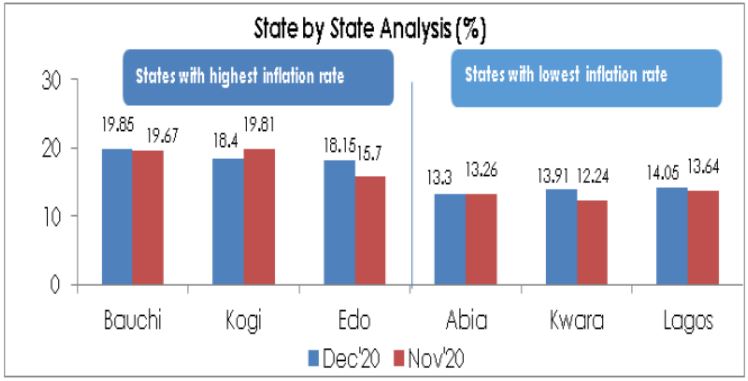 With the exception of South Africa, all the Sub Saharan African (SSA) countries under our review have released their inflation numbers for December 2020. Uganda was the only country under our review that recorded a decline, while others recorded an increase.

The rise in inflation was large as a result of disruptions to agricultural activities and currency depreciation due to the twin shock of COVID-19 and lower oil prices. Heightened inflationary pressures could force a reversal in monetary policy stance in these countries.

We expect a further increase in headline inflation in January 2021 but the pace of increase could slow due to the re-opening of land borders and increased output due to harvest.

The MPC is expected to meet on January 25/26. We expect the stubbornly high inflation rate to be one of the major considerations at the meeting. The CBN cannot be oblivious to a rate of inflation which is now almost 7% above the upper limit of its inflation target range (6-9%).

It, therefore, may consider tightening before the meeting or symbolically increasing the rates of its special bills, which is currently at 0.5%p.a.

Why inflation is important

Last week, and as widely forecast, the Monetary Policy Council (MPC) of the CBN left its monetary policy rate (MPR) unchanged at 11.50%. This...
Read more
- Advertisement -