Despite having a bleak outlook in 2020, TikTok ended the year on a good note and has started an upward trajectory in 2021.

According to the research data analyzed and published by Buy Stocks, it was the mobile application that was not a game that won the most worldwide in January 2021. During that month, it entered 128 million dollars thanks to user spending, an increase of 380% of January 2020 revenue. 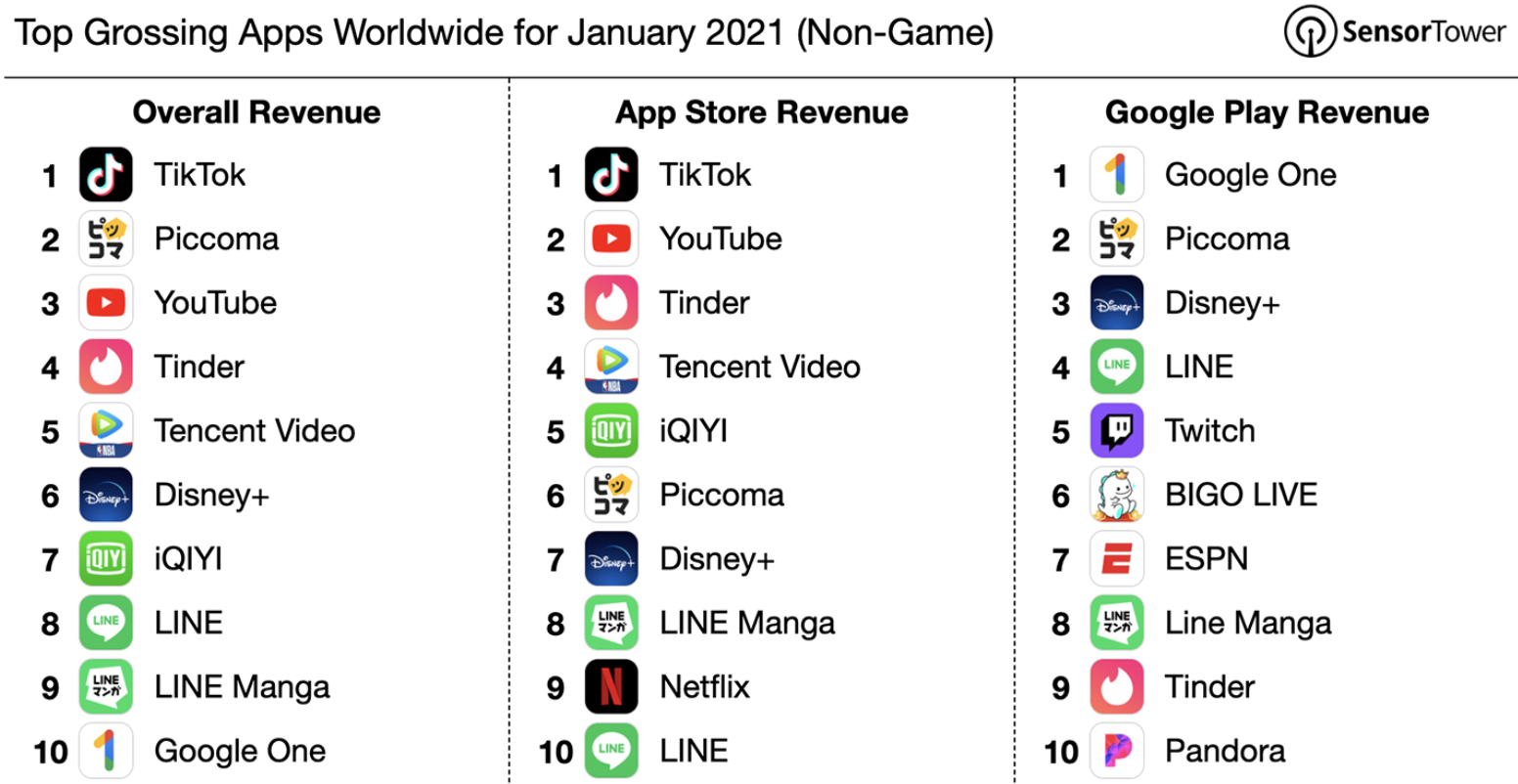 About 82% of revenue was produced in China through the local version of the app, Douyin. The US contributed 8% of the total, while Turkey contributed 2%.

Piccoma was the second highest-grossing app for the month, generating more than $ 96 million, a 690% year-on-year increase. YouTube ranked third, while Tinder and Tencent Video were fourth and fifth respectively.

TikTok also stood out in terms of downloads, taking second place on the list of the most installed non-game apps in January 2021. It had a total of 62 million installs across the top two app stores. China accounted for 17% of the total number of downloads through Douyin, while the US was second, with 10%.

The amazing performance of the TikTok mobile app started last year. Throughout 2020, it was the highest-grossing and most downloaded app worldwide. According to Sensor Tower’s annual report, its App Store revenue soared more than 600% to $ 1.2 billion.

According to data from Apptopia, there were a total of 89 million installs of the TikTok app in 2020 in the US alone. The number was far higher than second-ranked Instagram, which had 62 million. Facebook was next, with 53 million, and then Snapchat came, with 51 million.

TikTok has also seen a remarkable increase in its advertising business. According to a Reuters report, the platform managed to increase the number of US advertisers who signed campaigns in 2020 by 500%.

The trend is likely to continue throughout 2021, as TikTok has closed deals with major brands since late 2020. The list includes Chobani, Bose, McDonald’s, and Kate Spade, as well as nonprofits like St. Jude. Children’s Research Hospital. Between September 2020 and mid-February 2021, St. Jude has raised about $ 50,000 through the TikTok donation button.

In 2021, TikTok plans to offer ad packages designed around events and holidays. For example, you plan to celebrate Black History Month through a virtual event with 500 creators of colour. According to Reuters, he hopes to raise $ 750,000 from brands by sponsoring the event. It also plans to bring in $ 1,500,000 from brands sponsoring the event’s live finale on February 26, 2021.

According to The Influencer Marketing Factory, the number of requests from brands wanting to work with influencers on TikTok has increased by five since November 2020.

Considering the level of success TikTok has had in the advertising market, the biggest companies are clamouring to take a piece of the pie.

In addition, Google will launch a rival platform, YouTube Shorts. Like the TikTok experience, Shorts plans to offer videos of only 15 seconds or less. The Indian version of the new platform already has 3.5 billion views per day.

Douyin, the Chinese sister app of TikTok, is the largest short video app in China. However, it faces fierce competition from a rival to be reckoned with in China.

Kuaishou, backed by Tencent, currently ranks second among short video platforms in China. It recently went public, raising $ 5.4 billion in Hong Kong and becoming the world’s largest IPO in more than a year. After the IPO, its shares nearly tripled from its original price, taking its market value from $ 61 billion to $ 160 billion. From the IPO price of HKD 115 ($ 14.80), the share price has skyrocketed to HKD 320.20.