Global smart speaker sales reached a record level in 2020 in spite of the challenging conditions precipitated by the Covid 19 pandemic, according to the latest research from Strategy Analytics’ Smart Speakers and Screens service.

New model introductions from Apple, Amazon, Google, Alibaba and Baidu, which hit the market in time for the all-important holiday shopping season, contributed to a positive end to a difficult year. Smart displays accounted for 26% of the total smart speaker market during the quarter, up from 22% in Q4 2019. 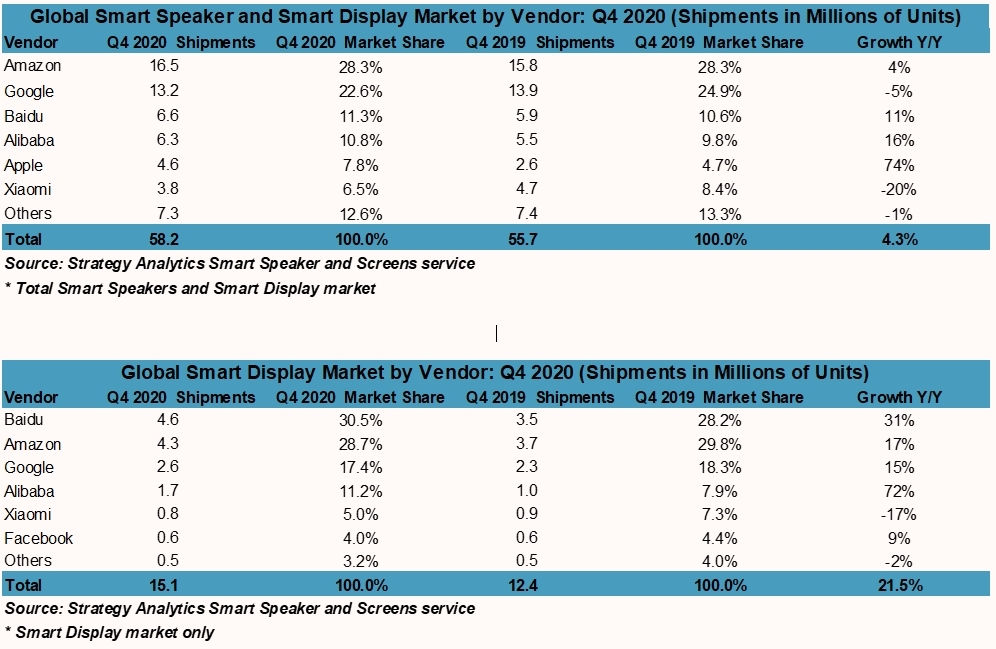 The growing availability of models across different sizes and price points is contributing to strong growth for smart displays.

Amazon led the overall smart speaker market in Q4 with a 28.3% share of global shipments as the delayed Prime Day and strong seasonal demand resulted in a return to year-over-year growth for Echo speakers following two-quarters of volume decline.

Google finished second with a 22.6% share of the market but its shipments declined slightly versus the previous year. Baidu and Alibaba finished the year strongly, with both posting solid double-digit shipment growth as they put the challenges of the first half of the year behind them.

Apple was the standout performer in the quarter as its global shipments grew by 74% year-over-year following the launch of the $99 HomePod Mini in November. Apple’s market share reached a record of 7.8% in Q4 2020, an increase of 3.1% over the previous year.

“Considering all of the obstacles put in front of smart speaker vendors this year, the market has held up remarkably well,” notes David Watkins, Director, Smart Speakers and Screens.

“The delayed Prime Day shopping event delivered a boost to year-end demand and if it were not for component supply shortages the market would have fared even better. Stock supplies are expected to remain tight through early 2021 as the global shortage in electronics components lingers on.

Assuming smart speaker manufacturers can weather that storm then the continued recovery in China and high growth opportunities in markets with low smart speaker penetration across Europe, Asia and Latin America should present them with a solid platform for growth in 2021.”

Smart speaker users are switching increasingly to display-based devices, or Smart Displays, according to the latest research from Strategy Analytics’ Smart Speakers and Screens service. The...
Read more

Global Smart Speaker Sales Up by 17% As Amazon’s Market Share Drops to 21.6%

According to the research data analyzed and published by ComprarAcciones.com, global smart speaker shipments are projected to grow by 17% in 2020. From a total...
Read more