Here Are The Poorest Countries in the World

GDP per capita is considered an important method to compare how poor or wealthy countries are in relation to each other. We decided to make an update to one of our most popular blog posts and take a look at our forecasts for GDP per capita in 2025 for the 130+ countries we cover to see which are projected to be the five poorest countries in the world at the end of our forecast horizon.

The projections used in this article are Consensus Forecasts based on the individual forecasts of over 1000 world-renowned investment banks, economic think tanks and professional economic forecasting firms.

The five poorest countries are all from Sub-Saharan Africa, a region that continues to be held back by problems such as institutional weakness, corruption, poor infrastructure and a lack of human capital. That said, Sub-Saharan Africa is also incredibly diverse: While it is home to the world’s poorest countries, it also boasts some of the most dynamic economies on earth.

For instance, we forecast Rwanda to be among the top five fastest-growing economies over our forecast horizon. Other countries, such as Ethiopia, Kenya, Senegal and Uganda are also forecast to grow strongly in the coming years.

With that said, let’s have a look at the poorest countries in the world according to the FocusEconomics Consensus Forecast for 2025 nominal GDP per capita.

Top 5 Poorest Countries in the World 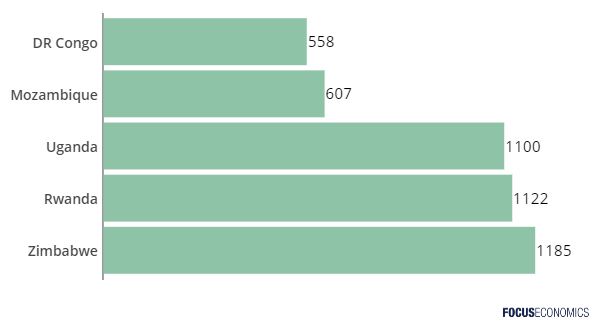 The DRC—the largest country in Sub-Saharan Africa—has had a tumultuous ride since achieving independence from Belgium in 1960, with years of violent conflict crippling economic development, notwithstanding vast mineral wealth.

Moreover, the Covid-19 crisis likely caused a contraction in economic activity last year amid reduced global commodity demand. The economy is seen recovering to a fairly modest growth trajectory over the next few years, but the country’s economic potential will be held back by weak infrastructure, a tough business environment and a shaky power supply.

“The mining sector is forecast to stage a modest recovery in 2021, before picking up pace in 2022. The Kamoa-Kakula copper project (by Canada’s Ivanhoe Mines) is on track to begin production in the third quarter of 2021, while mineral production at existing mines will start to recover more rapidly around that time amid a firmer increase in global prices and demand. Steady mining growth will, in turn, slightly boost the government’s spending capacity and indirectly support economic activity as a result.” – Economist Intelligence Unit

Mozambique has seen generally rapid growth in the last few decades, although momentum has eased markedly in recent years, and in 2020 the economy likely contracted due to the impact of the Covid-19 crisis. Growth is seen accelerating over our forecast horizon as new energy projects come onstream, lifting Mozambique’s GDP per capita above that of the DRC by 2025. However, sky-high external debt, volatile energy prices and the Islamist insurgency in the north of the country pose risks.

“Agriculture remains extremely important for the economy […]. However, this is set to change as the coal sector continues to grow and LNG megaprojects commence. The services sector is gaining in importance, with robust growth seen in telecoms and banking during the past few years, while the country also exports electricity to neighbouring countries, including South Africa.

Mozambique is recognised as a resource haven. With coal and natural gas reserves estimated at 1.8 billion metric tonnes and 100 trillion cubic feet (tcf), respectively, the country could very well become a major player in both industries on a global scale.” – Gerrit van Rooyen, an economist at Oxford Economics

Following years of insecurity and political turmoil following independence from the UK in 1962, Uganda has grown strongly in recent decades amid burgeoning industry and service sectors. However, it remains an extremely impoverished country.

After suffering severely last year due to coronavirus, Uganda is forecast to be one of Sub-Saharan Africa’s top performers over the next five years, and should partially close the gap in GDP per capita terms with neighbouring countries. The expansion should be driven by the development of the oil sector, construction, and services.

“With a renewed focus on developing the upstream oil industry, we expect gradual development of support infrastructure for the oil sector during 2022-25, which will also facilitate growth. Nonetheless, the flagship projects—including oilfield development and the crude oil export pipeline from Uganda’s oilfields to Tanga port in Tanzania—remain at the planning stage.

Given repeated delays, potential benefits from these will not be factored into our economic growth forecasts until private oil companies reach FIDs. The potential finalisation of agreements in 2021-22 would pave the way for construction of the pipeline to begin and thus presents a major upside risk to our growth forecasts for 2022-25.” – Economist Intelligence Unit

Read Also:  The Poorest Countries in the World

Rwanda’s economy has come a long way since the genocide of the early 1990s, which ripped apart the country’s economic, political and social fabric. GDP per capita rose from USD 250 in 2000 to over USD 800 in 2019.

While the Covid-19 crisis has certainly truncated progress over the last twelve months amid lower FDI and business closures, our panellists see output per head continuing to rise rapidly over the forecast horizon, supported by surging investment. However, a fragile fiscal position, low domestic savings and expensive energy pose downside risks.

Moreover, the country’s impressive development in recent decades has relied heavily on the leadership of Paul Kagame: An eventual end to his premiership could spell greater uncertainty.

“Regime stability appears assured over the short to medium term. The disruptions and economic impact of the Covid-19 pandemic do not appear to have altered public sentiment significantly, but challenges remain. Developments in and relations with neighbouring countries remain a potentially destabilising factor. Questions over President Paul Kagame’s succession remain important and factionalism within the Rwandan Popular Front (RPF) could arise over the long term. A managed transition to greater democracy remains a priority if the country hopes to avoid any shocks.” – Jee-A van der Linde, economist at Oxford Economics

However, in the decades that followed the economy entered a terminal decline under the leadership of Robert Mugabe—particularly since the controversial land reforms of the 2000s—with unemployment surging and the economy gripped by bouts of hyperinflation. More recently, Covid-19 has inflicted further damage.

Looking ahead, economic conditions are seen remaining precarious over the forecast horizon, with GDP per capita still forecast to be lower in 2025 than in 2019. The economy will be held back by extremely high inflation, an uncertain political environment and shortages of basic goods.

“We do not expect to see an economic bounce back anytime soon. Unfavourable business conditions are likely to persist over the near term. As such, we forecast a technical expansion in GDP of only 2.5% next year.

We do not expect to see improvement in the political situation over the short to medium term, and developments over the last quarter have done nothing to change this assessment. President Emmerson Mnangagwa’s administration has continued to target government critics, increasingly through targeted prosecutions and long periods of pre-trial detention.”- Jee-A van der Linde, an economist at Oxford Economics

In 38 of the region’s poorest countries, the Fund is investing linkages to strengthen the regional alliance, commercial exchanges and improving food security. Established to...
Read more

The Poorest Countries in the World

GDP per capita is often considered an indicator of the standard of living of a given country, as it reflects the average wealth of each...
Read more

From Afghanistan to Zambia, governments in the world’s most disadvantaged countries must prioritize dynamic enterprises and enact policies to help them thrive, create jobs,...
Read more