The United States and the United Kingdom governments have pledged more support for the National Drug Law Enforcement Agency, NDLEA after expressing satisfaction with the successes recorded by the new leadership of the Agency in just eight weeks in the saddle.

Consul General of the US Consulate in Lagos, Claire Pierangelo and the British Deputy High Commissioner in Nigeria, Ben Llewellyn-Jones in Lagos on Tuesday during the donation of a speedboat to the NDLEA. 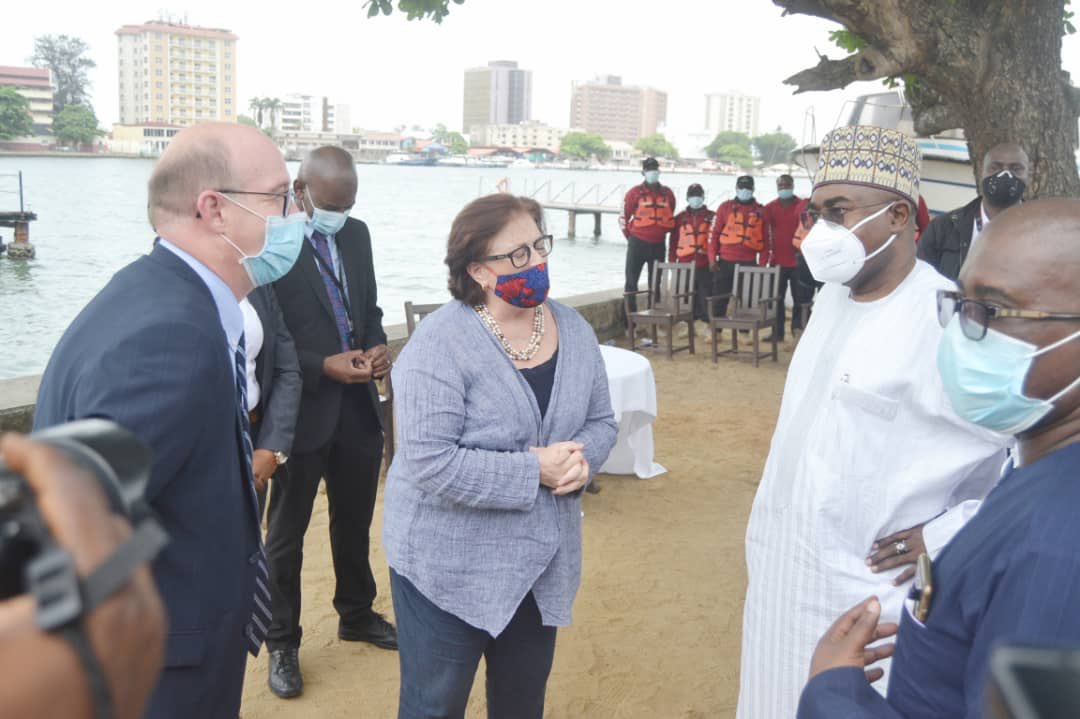 While Pierangelo expressed satisfaction with the performance of the Chairman/Chief Executive of the NDLEA, Brig. General Mohamed Buba Marwa (Retd) in just eight weeks on the seat, she assured that the US government would be willing to collaborate and give more support to the lead anti-drug agency in Nigeria in view of the dynamism and efficiency that have been brought into the operations of the Agency.

In his remarks, the Deputy British High Commissioner, Llewellyn-Jones said the UK government is pleased with the series of illicit drugs seized by the NDLEA at the Murtala Mohammed International Airport, the Tincan seaport and the Apapa seaport, all in Lagos soon after Gen. Marwa came on board as the Chairman of the NDLEA. 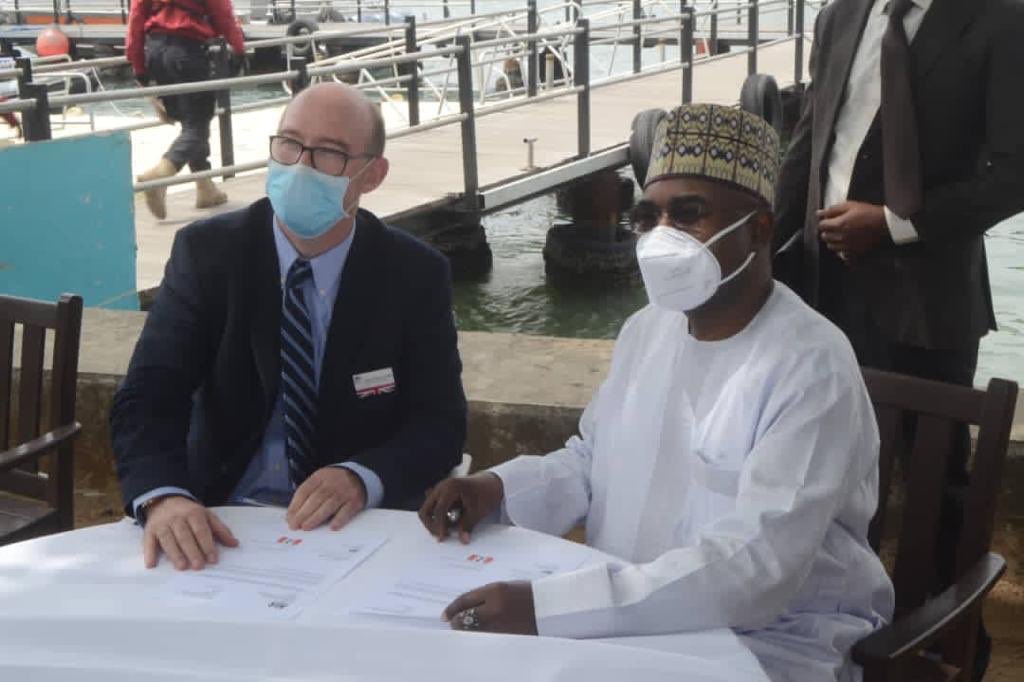 He said with the renewed vigour brought brought into the war against illicit drugs in Nigeria and the successes recorded between January and now, the UK would be glad to offer more support to the Agency, adding that the handing over of the patrol boat is a significant indication of that. “Since your appointment, there has been a flurry of activities.

There have been huge seizures across commands. The cocaine seizure at the Murtala Mohammed International Airport was massive and for this, NDLEA must be recognised and commended. We’ll continue to give you all the necessary support. We must continue to work on our relationship to make sure that the current situation continues”, he stated. 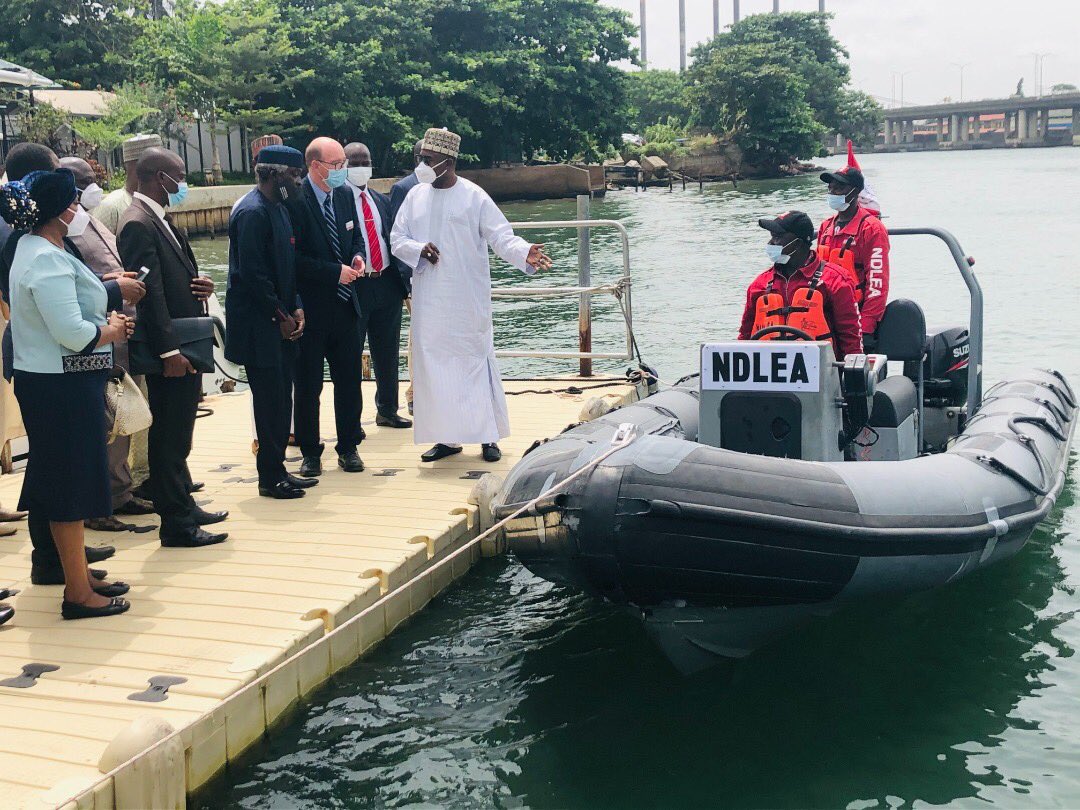 In his response, Gen. Marwa assured the British government that the boat would be put into good use, while thanking them for their investment and support for the war against illicit drugs in the country.

“I want to appreciate the American and the British government for the support given to the NDLEA over the years in terms of intelligence sharing, training, equipment and other logistics, and most especially since my assumption of duty as the Chairman of the NDLEA.

“Let me state categorically that with the new vigour and vigilance of our men and officers at the seaports, airports and land borders which recently resulted in huge seizures, I’m aware that drug traffickers have now turned to our waterways across the borders to bring in drugs. With the donation of this boat today, I’ll like to warn that the time is up for them also on our waterways because from now they have the NDLEA to contend with there and we’ll deal decisively with them if they fail to back out of the criminal trade”, he stated.

Earlier, the NDLEA boss led his team of officials on a courtesy visit to the Oba of Lagos, Oba Rilwan Akiolu who received them with his white cap chiefs. Marwa said he was at the palace to seek the support of the monarch and the state’s traditional institution for the war against drugs. He urged the royal father to set up drug control committees in Lagos and also add his influential voice to the campaign against drug abuse in the state and the country at large.

In his response, Oba Akiolu said he’s always known Marwa as an achiever and has no doubt that he would use his global network to impact positively on Nigeria’s fight against drug abuse and trafficking. He called for more funding for the Agency to be able to achieve its objectives. He commended Marwa for the noticeable impact he has made within the short time he took over the leadership of NDLEA.

This is not the best of times to be identified as a Nigerian, especially if you are a Nigerian in the diaspora. It is...
Read more

Health experts and partner organisations, led by MTN Nigeria, have concluded the pilot phase of the multi-stakeholder intervention in the fight against substance abuse...
Read more

Following over six months of impactful on-ground activations in cities across the country, Nigeria’s foremost ICT company, MTN Nigeria, in conjunction with the National...
Read more

…As Industry Experts Decry Drug Use among Nigerian Youth at State Conference In furtherance of the drive to curb the increasing rate of substance abuse...
Read more
- Advertisement -