Rite Foods Limited, a Nigerian Foods and Beverages Company, has filed an application of committal against the Nigerian Bottling Company (NBC) and its Managing Director at a Federal High Court in Lagos, for contempt of court.

The Rite Foods’ application for committal states that the contemnors, the NBC and its Managing Director (MD), Mathieu Seguin, have disobeyed interim injunctions granted by Hon. Justice Aneke of the Federal High Court on 9th February 2021.

This is in accordance with the case of trademark infringement and passing-off of its Predator energy drink on the mark of Rite Foods’ Fearless Energy drinks, with the likely intent of confusing consumers to make the wrong choice. 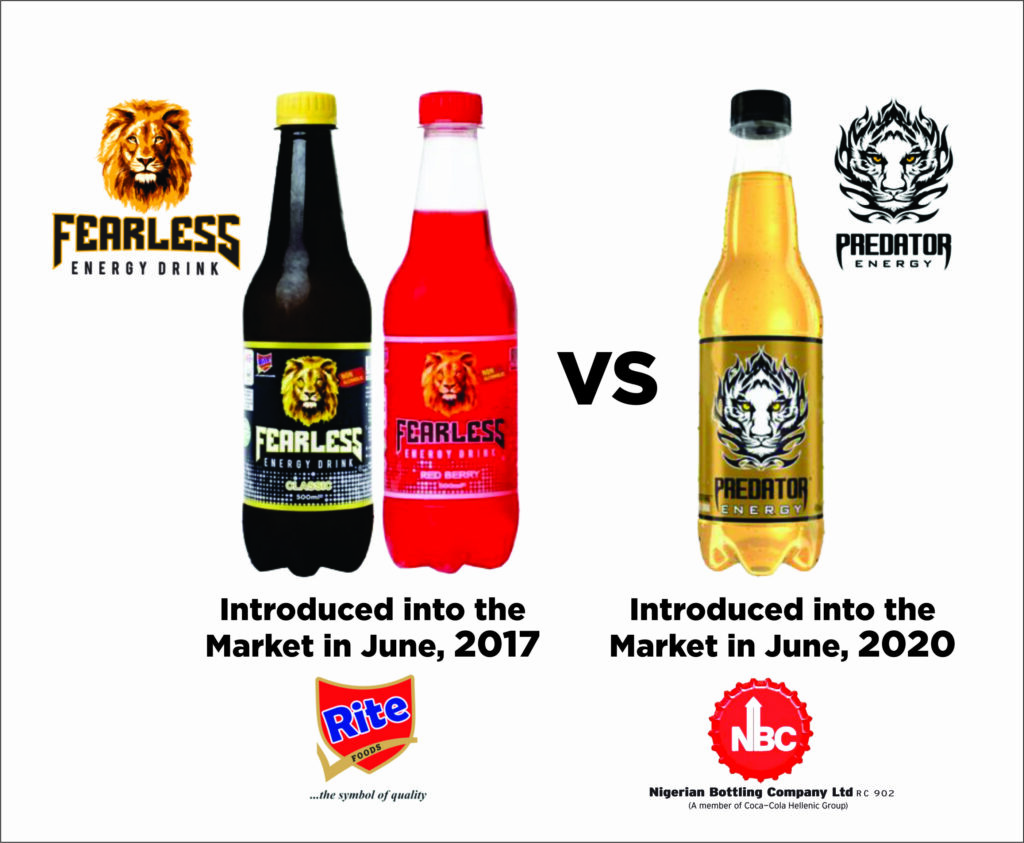 In the application for committal, which was published in the ThisDay and Guardian Newspapers of April 6, 2021, the plaintiff, Rite Foods is seeking an order committing the contemnors to purge themselves of the contempt of court.

The court papers filed by Rite Foods through its lawyer, Muyiwa Ogungbenro of Olajide Oyewole LLP, shows that the court would be moved at the instance of Rite Foods for an order committing the contemnors to prison for disobeying a court order.

According to the application of committal in both national newspapers, NBC and its MD are restrained from promoting or using any material for its Predator energy drink in a manner that infringes or passes off Rite Foods’ Fearless energy drinks.

The documents also state that NBC and its MD are in breach of the court order for failing to remove from the public domain, promotion materials already released including those released through Taaooma.

It further mentioned that NBC’s boss is responsible for the company’s breach of the court orders, as Rite Foods alleges that Seguin has the power to command its obedience.

On Form 48 of the Federal High Court, as published on Friday, March 19, 2021, in ThisDay and Guardian Newspapers, there was a notice of consequences of disobedience of the order of the court issued to the NBC’s MD and ex parte order restraining the company from promoting or using any sales promotion material for its Predator energy drink in a manner that infringes or passes off or that is capable of infringing or passing off the plaintiff’s Fearless energy drink, until the interlocutory application for an injunction is determined.

In suit No: PHC/L/CS/92/2021, the plaintiff, Rite Foods Limited, alleged that NBC has infringed on its trademark over its Predator energy drink, with a lion insignia in resemblance of the mark on its Fearless energy drinks.

The alleged trademark infringement, according to Rite Foods, has damaged its goodwill and it is seeking reliefs which include injunctions and damages for its loss.

And according to the provision of the Trade Marks Act, Cap T 13, Laws of the Federation of Nigeria 2004 and the Trademark Regulations 1990, the alleged infringement is against the holder’s right of Rite Foods Limited, as the exclusive owner of the mark for identification of its products within the country.

However, investigation reveals that the Plaintiff, Rite Foods’ Fearless energy drinks, which consist of the Red Berry and Classic brands, were launched into the Nigerian market in June  2017,  and has gained a wider market share before NBC’s Predator brand which made entrant in June 2020.

As part of its commitment to environmental protection, Rite Foods Limited, a world-class proudly Nigerian Foods and Beverages Company, has sponsored the cleanup of...
Read more

Tuesday, March 23: The Nigerian Bottling Company (NBC) has issued a piece of press information in response to allegations of copyright infringement against it...
Read more

The Nigeria Bottling Company (NBC) is entwined in a legal tussle over trademark infringement on its Predator energy drink, with a lion symbol, which...
Read more
- Advertisement -