Week Opens Negative on the NSE ASI, Index Down by 0.39%

Week Opens Negative on the NSE ASI, Index Down by 0.39%

The bearish sentiment from last week continued into this week, as the market opened with a -0.39% decline which has the All-Share Index at 38,766.61. The market capitalisation dropped as well to ₦20.28 trillion. Year-to-date, the market has currently shed 3.73%

All sectors declined by some magnitude in today’s trading session. The Banking sector recorded the most losses, shedding 1.67%, while the Industrial and Consumer Goods sector declined by 0.52% and 0.39% respectively. 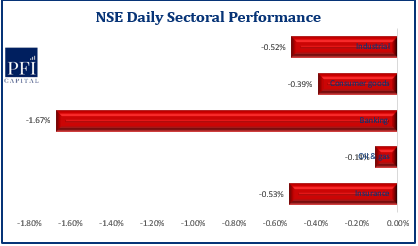 With 14 stocks advancing and 21 stocks declining today, there is a stark reversal in investor sentiment. The market breadth of 0.67x illustrates this when contrasted with  2.25x recorded in the previous session. 224.59 million shares worth ₦2.14 billion were traded today in 4,675 deals. When compared to the previous trading session, this indicates a 6.19% and 7.43% decline in volume and value respectively.

FGN Bonds The bearishness in the FGN bond market was sustained as the markets resumed this week, as market participants...
Read more
Business & Economy

NSE-ASI Closes The Week In Red, Market Declines by 0.06%

In the just concluded week, the NSE ASI retraced into negative territory amid sell-offs witnessed on the mid and large-cap stocks. We saw investors...
Read more
- Advertisement -