Equities Market Closes on a Positive Note…Inches Up by 0.02%

The equities market closed on a positive note today, with the All-Share Index marginally growing by 0.02% in a slight reversal from yesterday’s decline. Thus, the NSE ASI closed at 38,774.03 and the market capitalisation grew by ₦3.89bn to ₦20.29tn. Year-to-date, the market is down by 3.72%. 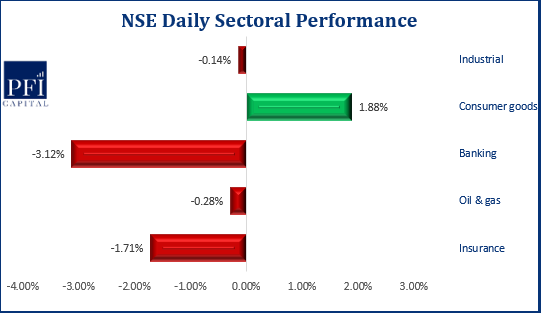 The Consumer Goods sector led the gains today, recording 1.88% growth. However other sectors recorded further losses from yesterday’s closing position. The Banking Sector recorded the highest loss at -3.12%, following a price drop in STERLNBANK (9.47%), followed by the Insurance sector which fell by 1.71%. The Oil & Gas and Industrial sectors shed 0.28% and 0.14% respectively.

Despite the market’s positive performance, the market breadth declined from 0.67x to 0.44x. 12 stocks advanced led by JAIZBANK (10.00%) and 27 stocks declined, led by STERLNBANK (-9.47%), thus indicating a negative investor sentiment.

With 14 stocks advancing and 21 stocks declining today, there is a stark reversal in investor sentiment. The market breadth of 0.67x illustrates this when contrasted with 2.25x recorded in the previous session. 224.59 million shares worth ₦2.14 billion were traded today in 4,675 deals. When compared to the previous trading session, this indicates a 6.19% and 7.43% decline in volume and value respectively.

The FGN bond space remained quiet for the most part. Marginal compression in yields was seen in a few instruments such as the FGN-APR-2023, which dropped by 1bps to 6.29%, and the FGN-JUL-2030 which dropped by the same magnitude to 11.16%.

The Nigerian equities market reverse its uptrend following losses in bellwether tickers in the Industrial sector. At the close of market proceedings, the NSE...
Read more

Equities Market Recovers From Losses, ASI Up By 89bps Today

The Nigerian equities market opens the week on a positive note following bargain hunting across the Industrial tickers. At the close of market proceedings...
Read more