SPORT BETTING IN NIGERIA: AN UNLIKELY SOURCE OF REVENUE AND JOBS

The sort code is a number which usually identifies both the bank and the branch where an account is...
Read more
3

The Lagos State Government has arrested 14 illegal sand dredgers on the shoreline of Ikoyi-Lekki axis at Banana Island...
Read more

In Nigeria’s commercial nerve centre, Lagos, shanty wooden structures with a number of benches, a television and a satellite dish are common sight. These venues, popularly called ‘viewing centres’, offer a bulk of the football-mad population in the city a chance to watch the European football league games, usually for less than a dollar. As the popularity of these matches grew in the early 2000s, so did the presence of these viewing centres. 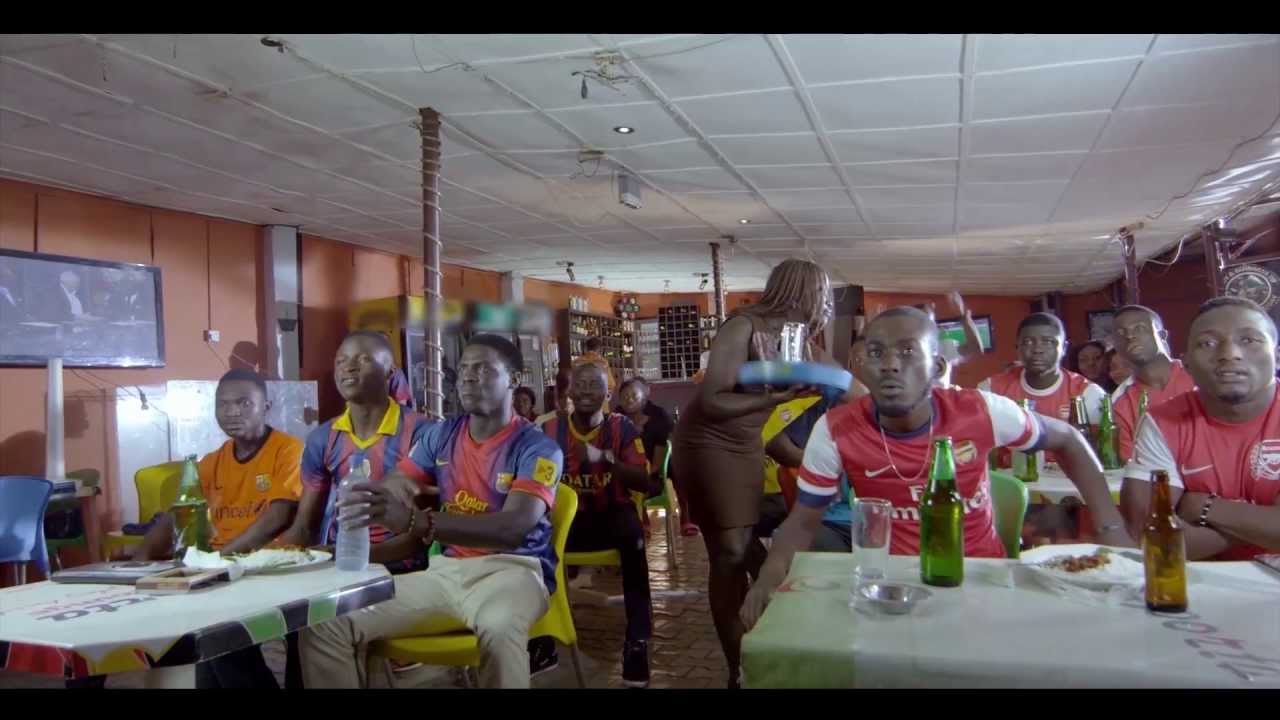 On match-days, these places are usually packed with passionate fans sporting replica jerseys and rooting for their favourite teams but more recently, a keen observer might notice fans at viewing centres clutching a white piece of paper – a ‘ticket’. Tickets are printed copies of selected games on which bets are placed and since late 2012, they have become more prominent in the Nigerian football landscape as sport betting is now very popular. Despite the notion that sport betting kicked off in Nigeria only recently, the earliest sport betting firms recorded their first entry into the market in 2007. 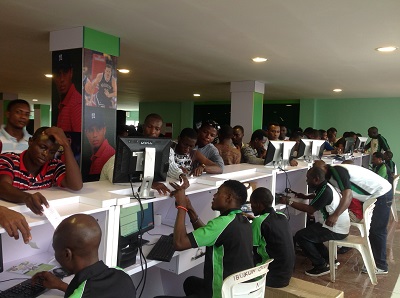 Generally, sport betting involves punters predicting the outcome of matches and getting their bets to correspond with the stakes. If the predictions are correct, the bets are rewarded with stipulated winnings. In Nigeria, where there are millions of incredibly passionate football fans, sport betting has found its proverbial home.

Ultimately, fans began to explore the real possibility of not just watching football but also making money from these games played thousands of miles away. For fans who watch football as a leisurely pastime, the ability to make money out of it has presented an opportunity too good to pass up.

Money is the name of the game

Typically, fans are used to hosting heated discussions on the monstrous weekly wages of their favourite footballers but sport betting has turned that conversation on its head. Football fans now discuss their earnings from bets as the sport has become a viable source of income. Every other weekend, betting companies announce big winnings from bets placed with amounts as low as N100.

The possibility of raking in millions from meagre amounts is enough motivation for punters across the country to bet on a daily basis and as a result, betting companies record hugely impressive numbers. Ademola Adebajo, CEO of Stakersden, a leading betting company in Lagos, projects that daily stakes run into billions of Naira.

“Currently, we believe daily bets have reached five billion naira cumulatively across all the betting companies. Punters in the country are currently seeing this as a source of daily bread and it is not uncommon to see people appropriating a certain amount for betting daily,” Adebajo said.

Despite Nigeria’s high levels of poverty and unemployment, punters cut across various demographics regardless of earning powers. According to Adebajo, low income earning punters spend between N200  and N1000 on bets while high income earners, tagged ‘big ticket customers’ spend thousands more, although these big ticket customers are firmly in the minority.

A pot of gold

In recent years, as Nigeria has become a thriving market, sports betting firms have sought to latch on and capture market share to various degrees of success.

Read:  Data is the New Oil of the Digital Economy

The default business model sees the companies set up shop in a central working office while seeking to establish a wide network of affiliate agents who open brick and mortar shops where customers can come in to place bets. For their part in the business chain, affiliate shop owners, or agents as they are formally known, earn commissions on the bets placed in their shops. While the offline component thrives, sports betting companies also operate an online business model exploiting Nigeria’s internet penetration.

Last month, the Nigerian Communications Commission announced that internet users in the country had reached 97 million. With more than half of the country online, betting companies recognize the need to establish viable online operations. For this purpose, websites are set up for punters to open personal accounts from which they conduct transactions ranging from depositing funds into an online wallet, placing bets and transferring winnings earned from bets to their bank accounts. While some companies explore both models aggressively, others like NairaBet simply choose to remain predominantly online models thus sidestepping the financial and logistical implications of setting up and running a large-scale offline model.

The first step however, is purchasing a betting license at an annual cost of N10 million from regulators. Even though the cost of kick-starting operations is high, betting firms still require deep pockets to pay out winnings from punters which can sometimes run into hundreds of millions in a single weekend, cumulatively.

In fact, the inability to pay up promptly after big wins has been known to cause major embarrassment for betting companies and on some occasions, eventual closure. Last May, on a weekend that saw few upsets and most predicted results clicking, punters on Bet9ja, the market leader in the sport betting space were said to have garnered up to N700 million in winning bets. To its credit, Bet9ja paid promptly- a feat that cannot be matched by some other firms. However, weekends like those are few and far between and more often than not, the betting companies make healthy profits and record enviable numbers.

Clearly, the business landscape is changing rapidly as betting firms compete aggressively for market share. According to Adebajo of Stakersden, betting companies with real goals of domination can no longer play small. “We started with a few local companies but right now, the business is moving from a low budget enterprise to one where scale is of the essence. Companies like Bet9ja have come into the market to redefine how sport betting should be done and every operator is reacting to the developments,” he said. “The business landscape has moved from trying to open a corner shop somewhere and offer betting services to people. The big companies are constantly innovating and upping the ante in the industry. New entrants will need significant start-up capital to measure up.”

Read:  Heineken Made Absurdly Dramatic Ads to Mirror the Thrill of Global Soccer

The need for innovation has seen companies seek ways to make betting easier and less restrictive for punters as live phone betting services have been launched. Stakersden has also recently launched a new service in collaboration with leading telecoms firms.

While some think the Nigerian market is already saturated and can no longer evolve, Adebajo says the next stage of evolution will be fuelled by foreign investment. “Foreign companies have been licensed to operate here and more are expecting to secure licenses or to partner with local operators. So in the next 5 years, we expect to see foreign companies taking a chunk of the shareholding of some of these companies to compete.”

Given Nigeria’s high unemployment figures, the creation of jobs by the private sector is critical and in this regard, the impact of sport betting has been profound. With some big companies running nationwide operations, while other focus on maximizing their reach regionally, the industry has created thousands of jobs directly and indirectly. Big companies have staff strength running into hundreds but through their associate networks, they offer agents a source of livelihood through affiliate partnerships as they earn money through commissions. Joseph Chukwu, a graduate and shop owner in Ikorodu, says sport betting has been a lifesaver. “There are no jobs in the country even for qualified graduates,” he said. “Rather than sit on my thumbs, I decided to set up my shop as an agent and earn money through commissions. Initially I thought of it as something to do while something bigger came along but now I’m focusing on building a chain of shops and being a mogul of sorts. It may sound crazy but I’ve gone from looking for a job to actually building a business.”

Adebajo thinks the employment issues and high rate of poverty means that the chance to earn a living from sports betting can hardly be ignored. “Majority of Nigerians live below the poverty line and any activity that can legitimately turn a small amount of money into large sums will always be appealing.” Adebajo’s sentiments are backed by the many instances when Nigerians have fallen victim to fraudulent multi-level marketing and pyramid schemes. Given the legitimacy of sport betting, its appeal is ostensible.

Read:  DESIGNING A SPACE THAT SUPPORTS CULTURE, COMMUNITY AND PRODUCTIVITY

In less than a decade, the sport betting industry has grown vastly and become not just a source of income for many Nigerian punters but also large job creation vehicle. Ordinarily, Nigerians are happy to watch football and celebrate the goals and other magical moments but these days, they do so knowing that every goal counts for something and win, lose or draw the outcome of the game could matter for more than bragging rights. Watching and following football games are no longer just a simple recreational pastime, a late winning goal scored in the English Premier League or in the German Bundesliga is no longer worth just three points – for a football fan, it can pay for the next meal.

Share
WhatsApp
Facebook
Twitter
Linkedin
Telegram
Email
Print
Previous articleUnderstanding the FGN savings bonds
Next articleWarranty And Guaranty: What I Should Know As A Nigerian Consumer

Rugby Union is set to return to the National Sports Festival 2020 after a ten year absence having missed...
Read more
Health

Lagos State Government has urged various levels of government across the Nation to emulate the FADAMA model since its policies have been very efficient...
Read more
Brand News

Executives from The Coca-Cola Company joined an international gathering of more than 3,000 leaders from business, government and civil society this week at the...
Read more
Business & Economy

Bridal Styles For A Nikkah Wedding

Nigerian Nikkah weddings are as gorgeous and memorable as other types of wedding ceremonies that are popular in the country. A particularly interesting aspect...
Read more

3 Critical Networking Mistakes And How To Avoid Them

A strong network can help you land a new job, find a mentor, or launch a new career path. Your network is your dream...
Read more