Interestingly, a significant proportion of Nigerians polled (77 percent) attested to the high prevalence of betting and gambling in their locality; particularly amongst respondents in the South-West (92 percent) and South-South (91 percent) geo-political zones which recorded the highest prevalence. Also, the top three betting platforms identified by Nigerians are: Bet9ja (64 percent), Nairabet (34 percent), Pool (22 percent) and Lotto (20 percent). Similarly, betting has become a growing trend amongst young Nigerians aged between 18 – 35 years, who accounted for the highest proportion of Nigerians who engage in the practice. 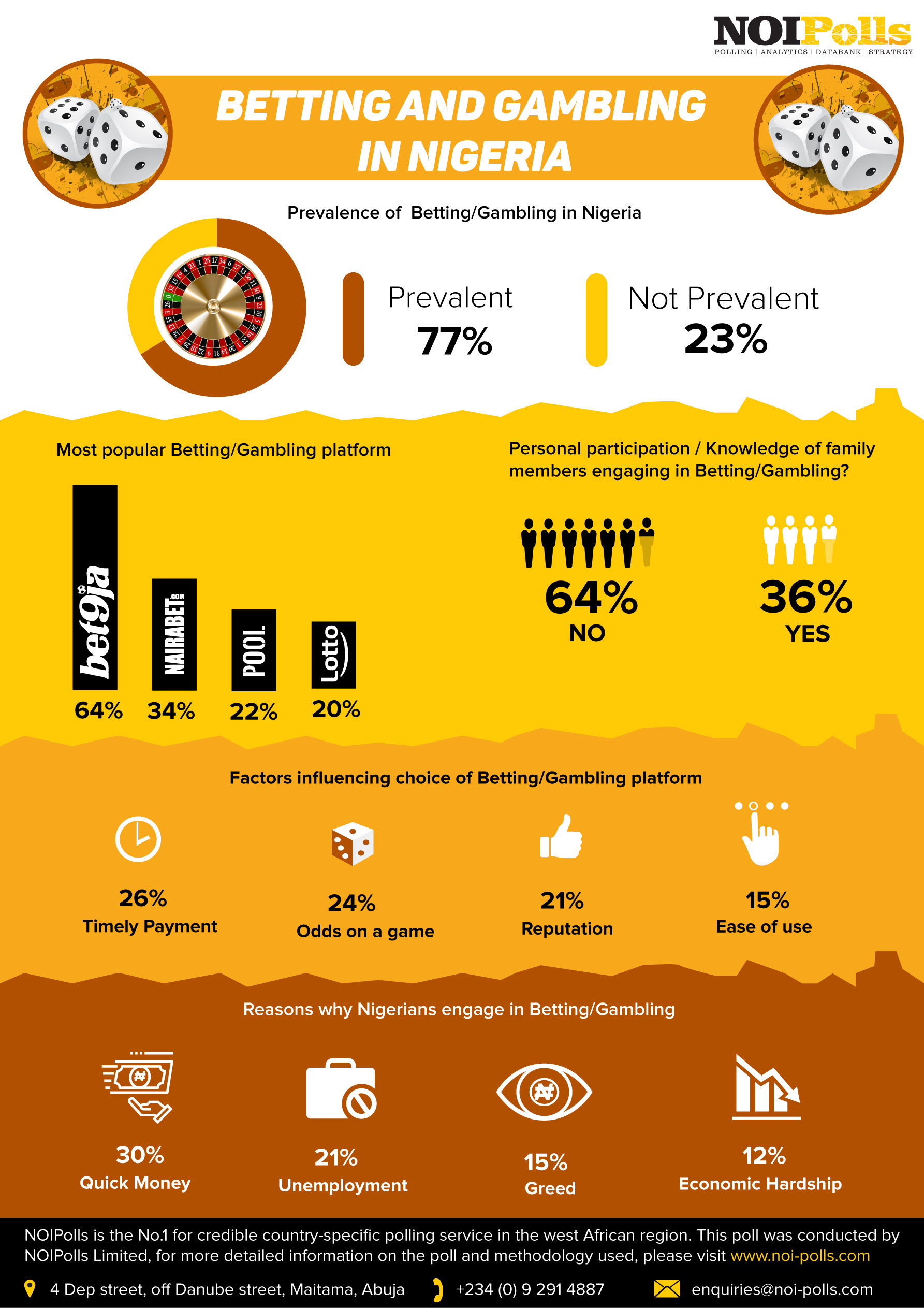 According to a report by News Agency of Nigeria (NAN), about 60 million Nigerians between the ages 18 and 40 years spend up to N1.8 billion Naira on sports betting daily with an average investment of N3,000 Naira per day.

Furthermore, in terms of active participation, 36 percent of those polled admitted that they personally engage or have family members who engage in betting; with more than half of this group of respondents (53 percent) engaged in daily betting. On the other hand, 60 percent of this same group reported that they win a bet ‘few times a month’, while 8 percent revealed that they have ‘never won a bet’. In addition, the poll highlighted that people prefer betting platforms that offer: timely redemption of winnings, favourable odds on games, reputation for prompt payment, and easy to use. Finally, respondents identified reasons why Nigerians engage in betting and gambling to include: ‘quest for quick money’ (30 percent), ‘high rate of unemployment’ (21 percent) and ‘greed’ (15 percent) amongst other reasons.

In reality, betting has its positive and negative sides however, given Nigeria’s recession and high unemployment figures, the impact of the betting industry in the nation’s economy has been positive as it has created thousands of jobs directly and indirectly. Big betting companies have staff strength running into hundreds; and through their associate and affiliate networks, they offer agents a source of livelihood from commissions earned as people engage in betting.

These are the key findings from the Betting Poll conducted by NOIPolls in the week of July 17th 2017.

Betting is an activity of predicting an event result and placing a wager on its outcome with the hope of winning a set prize and it is regulated by National Lottery Regulatory Commission (NLRC) which is empowered by the National Lottery Act, 2005 to regulate betting lottery in Nigeria.

Companies that provide sports betting services are usually referred to as bookmaker, bookie, sports book or betting agency. There are numerous betting companies that provide such services all licenced and heavily regulated by the Nigerian lottery commission. These companies have customized high -tech online betting apps or platforms to cater for their online customers and retail-outlets for non-online customers. These retail outlets are dotted across the Nigerian landscape even in remote communities one could still find betting shops or outlets with help of affiliate agents.

In recent years, betting has enjoyed high patronage in Nigeria likely triggered by the high rate of unemployment in the country thereby, creating a viable environment for betting companies. Betting has its positives and negatives; as sometimes people win and lose their bets and typically either of these outcomes can lead to depression, debts or serious gambling habits.

Against this backdrop, NOIPolls conducted a poll on betting in order to the gauge the perception of Nigerians on betting.

In a bid to ascertain the prevalence of betting in Nigeria, respondents were asked to express their opinions on its prevalence and analysis of results revealed that a large majority (77 percent) stated that betting is prevalent in Nigeria. Residents from the South-West zone (92 percent) had the highest prevalence, while the North-west zone (57 percent) recorded the lowest prevalence. Interestingly, analysis by age-groups shows that those aged between 18 – 35 years recorded the highest percentage (79 percent) of respondents who stated that betting in Nigeria is prevalent.

Following the high prevalence of betting, respondents were asked about betting platforms known to them and results revealed Bet9ja (64 percent) as the highest known, this finding is validated by a publication on Wings newspaper which reported that Bet9ja is the most popular betting platform in Nigeria. Other betting platforms mentioned are Nairabet (34 percent), Pool companies (22 percent) and Lotto (20 percent).

The poll also sought to measure the proportion of Nigerians who are involved in betting and analysis revealed that nearly 4 in 10 Nigerians (36 Percent) actually engage in some form of betting and those aged between 18 – 35 years accounted for the largest proportion (41 percent) of Nigerians in this category. This finding is in line with the report from News Agency of Nigeria (NAN) which stated that Nigerians aged (18-40) years are most likely involved in betting. On the contrary, a larger proportion of the respondents disclosed that they do not engage in or have a family member who engages in betting. It is worthy to note that some of these respondents may out rightly refuse to disclose their participation due to societal stigmatization.

The survey sought to determine the frequency of Nigerians who actually engage in betting and analysis revealed that more than half of the respondents (53 Percent) disclosed that they bet or stake games on ‘daily’ basis.  While 39 percent engage in it ‘a few times a month’, a meagre one percent say they rarely engage in it.

In the same vein, a further probe established that majority (60 percent) of the respondents disclosed that they only win ‘a few times a month’, this is followed by 29 percent who win ‘a few times in a week’. While 8 percent claimed that they have ‘never’ won any bet, 3 percent indicated that they win ‘on a daily basis’.

In order to ascertain the factors that influence the choice of betting platforms adopted by the betting population, findings reveal that 26 percent mentioned ‘timely payment’ as the main factor that influences their choice. This was closely followed by respondents who believe it is the ‘odds/stake placed on a game’ (24 percent). Other determinants mentioned include ‘reputation for payment’ (21 percent), ‘ease of use’ (15 percent) among others.

In conclusion, this latest poll by NOIPolls has revealed the rising trend of betting and gambling in Nigeria, especially among the country’s bulging youth population. Sadly, this trend is driven by the quest for quick money, unemployment, greed and economic hardship amongst others. However, our concern is that while betting and gambling may serve as an avenue to pull surplus funds from the economy for savings and investment puposes; this side effects of this practice on the population, especially youths may have a negative multiplier on the country.

Betting and gambling have been found to be quite addictive and can stimulate further social vices if not properly managed. Gambling has ruined home and marriages, and rendered people brankrupt and there’s need for proper sensitisation on the negative effects of gambling and betting. Finally, it is important for reulatory bodies such as the National Lottery Commission to step up its regulatory efforts to ensure that the practice isn’t abused and exposed to young people, espcially teenagers.

NIKE RETAINS #1 IN AFRICA FOR THIRD YEAR IN A ROW AFRICAN BRANDS DROP BY OVER 60% IN 10 YEARS DANGOTE AND MTN...
Read more
Entertainment & Lifestyle

Keanu Reeves First on the list is Keanu Reeves where Neo (The Matrix) and Babayega (The Boogeyman) comes to mind. You better don't mess with...
Read more
- Advertisement -

History of the Slot Machine

The slot machine is iconic when it comes to the history of gambling. Slot machine gaming is an absolute crowd favourite, actually earning more...
Read more

New Poll Reveals an Increase in Betting Population in Nigeria

100 Naira War: Who Currently Owns the Market Space? Which Brand Has Got The Greatest Opportunity With Consumers?

The Coca-Cola Company commenced an activation to promote the new price for its 60cl bottle now at NGN100 from its initial price of NGN150....
Read more

About 40% of Nigerians Engage in Gambling in The Country

Abuja, Nigeria. September 16th, 2019 – Nigeria is one of many countries that is being inundated with sports betting. The Nigerian sports betting (online...
Read more
- Advertisement -