Employees join companies but leave managers. A Gallup poll of more 1 million employed U.S. workers concluded that the No. 1 reason people quit their jobs is a bad boss or immediate supervisor. 75% of workers who voluntarily left their jobs did so because of their bosses and not the position itself.

In spite of how good a job may be, people will quit if the reporting relationship is not healthy. “People leave managers not companies…in the end, turnover is mostly a manager issue.” 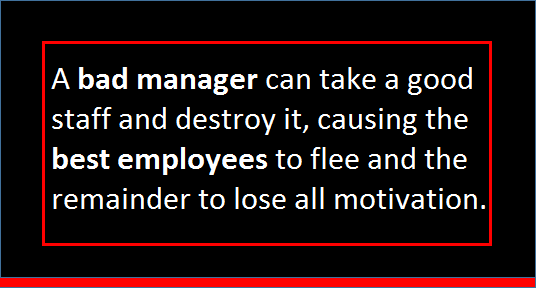 Here are the four types of bad bosses that make employees want to quit companies:

1) “Marionette” – In an age of uncertainty, many managers are yielding to this trap of just playing it safe to preserve their position and privileges. They just follow orders. They never stand up for their team or question policies. They are mere puppets and exude no loyalty to employees. A lack of integrity in a manager can make an employee lose passion for the job.

” Respect is how to treat everyone, not just those you want to impress.” ~Richard Branson

2) “King Kong” – Some managers when they reach the top immediately forget where they came from. These type of managers possess a superiority complex and like to draw the distinction between management and staff. It is dreadful to work under a manager who is more worried about pushing their weight around than building relationships. Great leaders don’t talk down to their employees or make them feel inferior. Respect is a must.

3) “Superman” – They think the organization revolves around them. Some start behaving like they are the owners of the company. This trap includes making all of the decisions solo, ignoring feedback and taking the credit. When employees don’t feel appreciated, morale and engagement plummets.

” Leaders who don’t listen will eventually be surrounded by people who have nothing to say.” ~Andy Stanley

4) “Taskmaster” – Their sole focus is on the bottom line. Continuously drilling employees is a sure way make them unhappy at work. Micromanagement suffocates, demoralizes and kills creativity. If you hired someone, it means you believe they are capable of doing the job. A manager’s job is to motivate and provide guidance and support. It’s not constantly monitoring an employee’s every movement.

A bad boss creates fear and makes work drudgery. Studies show having a bad boss raises a worker’s chance of having a heart attack by as much as 60 percent. What was it about a bad manager that increased the risk of heart disease? The stress and anxiety caused by unfeasible targets, lack of support, unfair practices and threats of punishment.

I received this email from Steve:

“I got a call my wife had been in a serious car accident. I told my boss I needed to leave immediately. He asked me to give him 10 more minutes. I was so disappointed because he could have covered for me. I come in early. I leave late. I hardly take any sick leave and that was the response I got from him? I looked at him and walked straight out the door. My relationship with my manager went south after that. I started planning my exit strategy and within 3 months, I quit.”

When you go beyond the call of duty for your employer, and they respond with inflexibility during your time of need, the relationship at that exact moment is lost.

Bad bosses are the No. 1 cause of unhappiness at work. People see the company only through their immediate boss. Employees know when they are on shaky ground. A manager who keeps throwing employees under the bus will create an atmosphere of anxiety and distrust. A recent study says that 56% of employees would turn down a 10% raise to stay with a great boss.Treat employees fairly, reward them for their hard work and they will give 110%.

There are too many individuals in positions who abuse their power. This is why good employees quit jobs. A culture of blaming, punishment, inflexibility, and insensitivity only pushes people away. Employees want managers who are leaders. Managers who will inspire them, who are fair and honest and will stand up for their team.

I have seen too many exceptional employees become disheartened, stop caring, and just go through the motions until they find another job. Managers, please use the human-to-human approach when dealing with employees. It’s people you are dealing with and not just a statistic on a graph. Get to know your people, meet them where they are and be flexible. You can’t buy loyalty but you can earn it. If you want loyal employees – Treat your people well!

The Most Innovative Real Estate Brands Africa Awards 2020 is a Celebration of Innovation, Leadership and Growth of the...
Read more
Brand News

Unilever is pleased to announce the completion of the unification of its Group legal structure under a single parent company, Unilever PLC. From today, and...
Read more
News

President Muhammadu Buhari will, on December 1, roll out the auto-gas scheme in Abuja as the Federal Government moves to create an alternative fuel...
Read more
Brand News

The Financial Centre for Sustainability, Lagos (“FC4SL”), in collaboration with PricewaterhouseCoopers (“PwC”) Nigeria, executed a webinar session as part of the Market Education and...
Read more
- Advertisement -