2018 Misery Index: What will be the Most Miserable Economies in 2018? (Infograph)

The vast majority of countries report on economic indicators on a regular basis. Therefore, we can compare each nation to get an idea of how happy or miserable the people are in each of the nations.

Are you curious how happy or miserable your country is? In this post, we attempt to give you an idea of which countries will be the most miserable (or happy) next year by using our projections for inflation and unemployment in 2018 for 126 countries to calculate their misery index score. 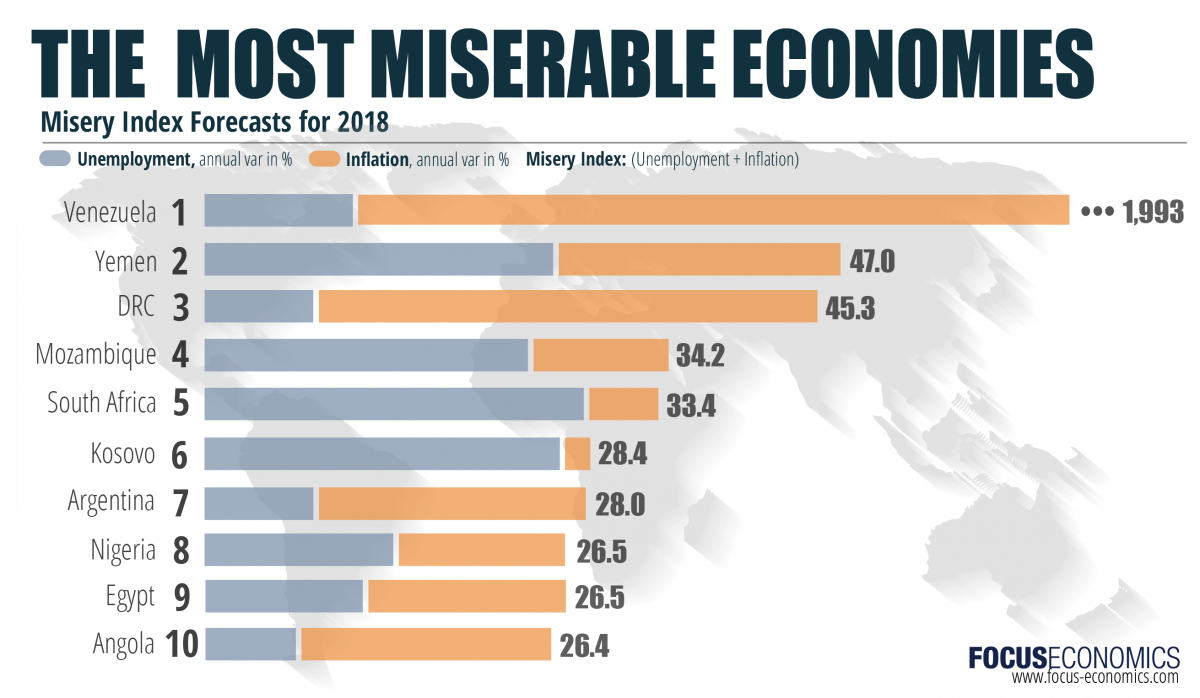 Thailand will once again be at the bottom of the list due in large part to their rather unorthodox way of counting employment as well as their low fertility rate and aging population. Remember, contrary to most lists, the misery index is a list where economies want to be as far from the top as possible.

And speaking of the top, any way you slice it, Venezuela is going to be the most miserable economy in 2018. With inflation projected to come in close to 2000% in 2018, their unemployment level is largely irrelevant for our calculations of their misery. Venezuela’s economic woes have plagued them for years now with sluggish oil prices have played a large part in the country’s demise, as crude oil is the country’s only significant export. Venezuela’s situation doesn’t look like it will be changing anytime soon, as macroeconomic imbalances, unorthodox policies, surging inflation and a lack of investment are expected to keep Venezuela in a severe economic crisis for the foreseeable future.

Although no country comes anywhere near Venezuela’s score on the misery index scale, DR Congo and Yemen come in as the second and third most miserable countries in 2018, both countries have shot up into the top 3 from 22nd and 18th respectively in 2016.

In the DR Congo, inflation remains at multi-year highs and although export earnings are set to increase, GDP growth will remain subdued and economic conditions challenging. The Central Bank warned that if the government decides to ease ongoing austerity measures and loosen monetary conditions, this could cause the Congolese franc to depreciate further, leading inflation to shoot up and increasing economic hardships in the population as a result. Despite the DR Congo staying in the top 3 in 2018, the country can take solace in the fact that their misery index score is projected to come down 8 points from 2017.

In war-torn Yemen, the situation is spiraling out of control. The economy has been torn to shreds by the civil war, which has caused agricultural and hydrocarbon production to screech to a halt and fiscal revenues to plummet, while a cholera epidemic threatens to spread rapidly. Despite how it sounds, our projections are still favorable to Yemen for next year, as we project 4.0% growth in 2018 and 10.1% in 2019, but this all depends on the outcome of the civil war. Similar to the DR Congo, Yemen’s misery index score is projected to come down in 2018 and 2019.

Egypt and Argentina will also see similar notable drops in the index despite staying in the top 10. In Argentina, monetary authorities continue to attempt to corral the stubbornly high inflation rate, however, with little success. Nonetheless, it is projected to come down to under 20% in 2018 for the first time in 5 years. Egypt has suffered from high inflation for the last year and change due to a variety of factors including the devaluation of the pound in March 2016 and government subsidy cuts for fuel and electricity last summer. However, inflation is beginning to decrease as the effects from the summer’s reforms subside along with tight monetary conditions, which are expected to stay in place for the foreseeable future. The unemployment rate has also fallen substantially over the last 12 months, which is expected to continue. Both economies are moving in the right direction, with Argentina projected to be out of the top 10 come 2019.

Misery Index 2018: Moves in the middle

In the middle of the list, there will be a number of notable moves downward in 2018. Starting with Ukraine, the economy is currently floundering likely still feeling the repercussions of severed trade ties with the rebel-held Donbass region. But, inflation is seen coming down next year along with unemployment, as the economy improves as effects from the blockade fade.

Heading west, the Iberian connection, Spain, and Portugal will both see substantial moves down the misery index list. In Spain, the labor market is improving markedly as is the economy as a whole, while in Portugal it is the same story. Unemployment fell to a 9-year low in Q3 of 2017 in both economies and is expected to continue on a downward trajectory in 2018.

Kazakhstan, where inflation is the main contributing factor to the country’s misery score, is making a move down the table as well, with inflation expected to fall to below 7% in 2018. Inflation was more than double that in 2016.

The Russian economy, which is seeing a resurgence since 2016, is making moves toward a happier economy. Inflation has fallen to multi-year lows of late and unemployment is projected to fall in 2018 as well. Russia has fallen on the list from 43rd in 2016 to a projected 78th in 2018.

Another one of the BRIC countries, Brazil is also moving down the list in 2018 from where it was in 2016. The economy looks like it turned a corner in mid-2017 after a few years of less than stellar economic performances. Historically low inflation is likely to play a part in fueling an acceleration in growth in 2018. While the economy is finally growing after the worst recession in its modern history, many challenges lie ahead, and severe macroeconomic imbalances still need to be addressed.

Ireland’s economy has become the mecca for U.S. tech companies and has seen its economy improve massively as a result over the years. Nevertheless, it is due for a massive fall toward happiness in 2018 from 2016. Unemployment is currently at multi-year lows and is projected to fall substantially in 2018.

Rounding out the economies with the most improvement toward happiness in 2018 is Azerbaijan, Belarus, Belgium, Ghana, Kenya, Peru, Paraguay, the Netherlands, Lithuania, Latvia and lastly, Angola, which will be making its way out of the top 10 by 2019. The United States and China are still in the top 25 least miserable countries, at 22nd and 23rd respectively.

The case of Brunei

An interesting case toward the bottom of the list is Brunei, which has experienced negative inflation in recent years but is projected to be 0% in 2018. Unemployment is expected to drop drastically in 2018, which reflects the tremendous progress they have made recently in the labor sector. In early November, the World Bank named Brunei “the most improved country” in its annual Doing Business report. The country jumped 16 places from last year’s rankings. The report noted reform efforts to create a more business-friendly environment. These reforms included making credit more accessible, protecting minority investors and reducing barriers to starting a business. Brunei will be moving down the list over 25 places to be the second happiest economy in 2018 according to our projections. 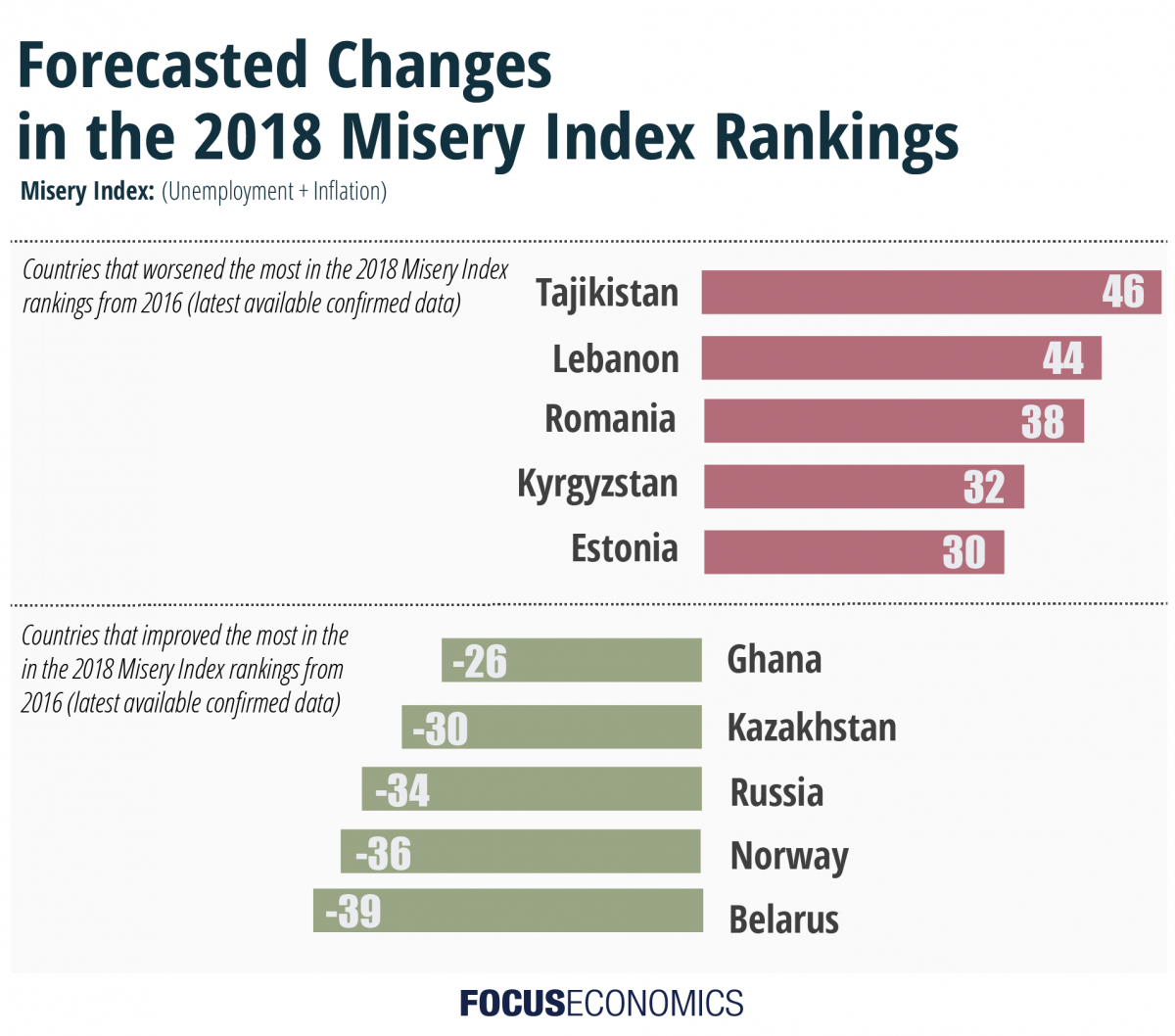 What about the countries making moves in the wrong direction?

In contrast to some of their regional partners such as Angola, Ghana and Kenya, the two African giants, South Africa and Nigeria, are moving in the opposite direction. South Africa is moving up into the top 5 most miserable economies in 2018 and will be number 2 on the list by 2019, with an unemployment rate of 25% and seen rising. Nigeria, although moving up the list of most miserable economies, is actually projected to see its index decrease in 2018. Unemployment is still projected to stay at high levels in 2018, but inflation is projected to come down gradually over the coming quarters as the economy looks to have turned a corner in mid-2017.

Another notable economy moving in the wrong direction is Romania. Rather surprisingly, Romania is projected to move fairly high up the list in 2018 and 2019. Romania has been the star of eastern Europe in recent years, and the economy is on track to grow at the fastest pace since 2008 this year. However, a number of issues including rising inflation are presenting risks to economic growth in 2018. Inflation is projected to increase substantially next year, causing Romania’s rise up the list toward misery.

You can see the entire list below. If you’d like to get more historical data, Consensus Forecasts, charts, graphs and written analysis from our team of economists, download a free sample report by clicking on the button below the table.

Earlier, the National Bureau of Statistics (NBS) published its long-awaited quarterly unemployment and underemployment report for Q4-17 to Q3-18. According to the report, the...
Read more

The misery index is an economic indicator originally created by Arthur Okun, a former Brookings Institution economist and member of the Council of Economic...
Read more

Rivers State has the Highest Misery Index in Nigeria