US President Donald Trump’s “highly anticipated” list of the 2017 news stories that had the media bashing him at every turn, is now live.

He’s calling it the 2017 Fake News Awards. And it’s one of the bookmarks.

“2017 was a year of unrelenting bias, unfair news coverage, and even downright fake news. Studies have shown that over 90% of the media’s coverage of President Trump is negative,” the post begins.

The piece then lists the “winners” of the 2017 Fake News Awards, among which is CNN which Meryl-Streeps its way to four awards.

ABC News, the New York Times, Time Magazine and the Washington Post all feature prominently too. But we’ll get into that a little later.

For now, let’s look at the social impact the blog has had thus far.

Published around 3 AM SAST Thursday morning, Trump’s tweet carrying the link has already amassed more than 30,000 comments, 28,000 retweets, and more than 70,000 likes.

#FakeNewsAwards was also trending on Twitter, from the United States to South Africa, to Australia and the UK. Many in the United States were supportive of Trump’s move, calling it defiant and a “refusal to be politically correct”. 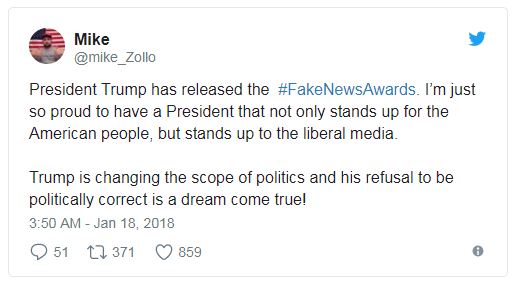 Others just couldn’t stay away from the jokes. 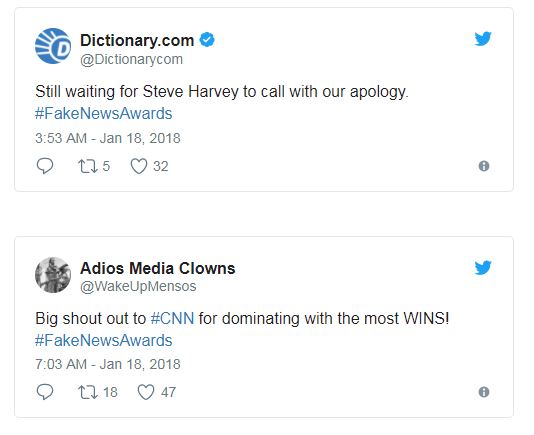 Google is also seeing rising search traffic worldwide for “Fake News Awards” and related searches. CNN is seemingly an inadvertent beneficiary of the Awards, seeing a marked rise in search queries for the outlet. 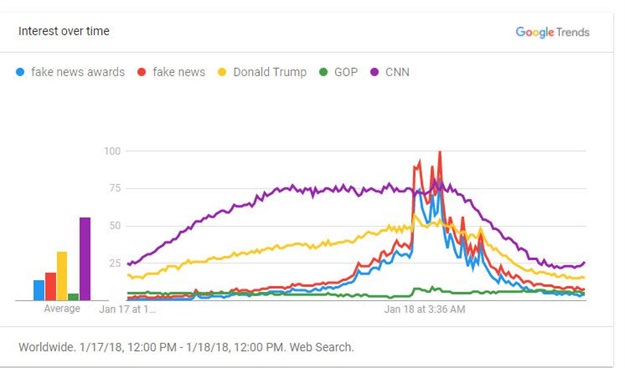 While the disdain and praise Trump’s receiving on Twitter is only just beginning, this probably isn’t the last we’re going to hear of the Fake News Awards.
We’re just disappointed that a gala dinner wasn’t held.

And without further ado, here are Donald Trump’s Fake News Awards winners for 2017, as appears on the GOP blog post:

Written by: ANDY WALKER (Camper by day, run-and-gunner by night, Andy is an editor at Memeburn and prefers his toast like his coffee — dark and crunchy. Specialising in spotting the next big Instagram cat star, Andy also dabbles in smartphone and game reviews over on Gearburn)

This article appeared first in BizCommunity

It is inevitable that Donald Trump is facing a humiliating scenario whereby after all his bluster, he is going to have to concede that...
Read more

CNN International Commercial (CNNIC) has appointed two joint-heads of CNN’s international advertising sales business to give brands and advertisers from wherever they are in...
Read more