National Bureau of Statistics, NBS, today, reported that the Federation Account Allocation Committee (FAAC) disbursed the sum of N655.18bn to the three tiers of government in January 2018 from the revenue generated in December 2017.

The amount disbursed comprised of N538.51bn from the Statutory Account and N83.96bn from Valued Added Tax (VAT).

Also, N14.713bn and N16.055bn were distributed as FOREX Equalisation while an excess bank charges of N1.938bn recovered was also distributed.

The report stated: Federal government received a total of N278.73bn from the N655.18bn shared. States received a total of N175.55bn and Local governments received N132.48bn. The sum of N51.74bn was shared among the oil producing states as 13% derivation fund.
“Revenue generating agencies such as Nigeria Customs Service (NCS), Federal Inland Revenue Service (FIRS) and Department of Petroleum Resources (DPR) received N4.12bn, N7.44bn, and N3.10bn respectively as the cost of revenue collections.”
Further breakdown of revenue allocation distribution to the Federal Government of Nigeria (FGN) revealed that the sum of N240.98bn was disbursed to the FGN consolidated revenue account; N5.06bn shared as share of derivation and ecology; N2.53bn as stabilization fund; N8.50bn for the development of natural resources; and N5.83bn to the Federal Capital Territory (FCT) Abuja.
Click here to download the full report… 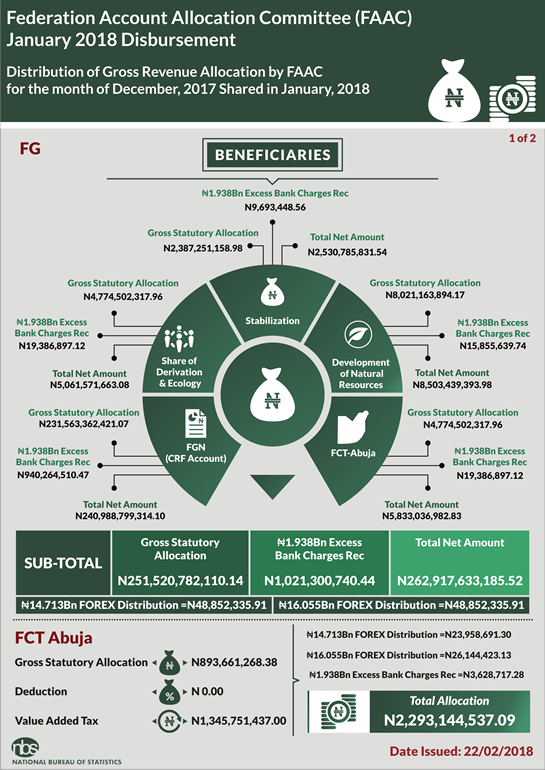 The Federation Account Allocation Committee (FAAC) disbursed the sum of N619.34bn to the three tiers of government in December 2020 from the revenue generated...
Read more