Water is a luxury many cannot afford. As ridiculous as this may sound, it is true. Over a billion people in the world lack access to water, 844 million people cannot access safe water and are exposed to diseases such as cholera and typhoid, and a total of 2.7 billion experience water scarcity for at least a month a year. This is why a Swedish social enterprise invented Solvatten, a combined portable water treatment and water heater system that comes in form of a solar-powered jerry can.

Swedish environmentalist Petra Wadström, came up with the idea for the jerry can in 2005 when she saw women and children in Indonesia contracting waterborne diseases from drinking contaminated water. “I wanted to give women the power to be independent and have control of their daily lives. Even though they might not get a source of clean water, they could still purify the water they get from any source so it is safe for them to drink and use”, Wadstrom said in an interview. 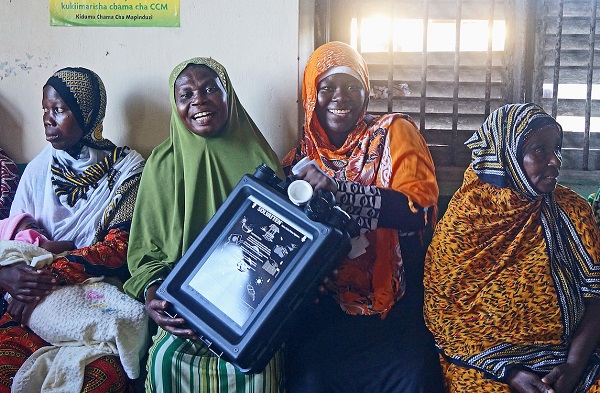 Solvatten, which means ‘sun water’ works by simple practical technology. The jerry can which is a pair of two five-litre containers is filled with water via an opening that has a fabric filter. Once filled, it is opened in two like a bookcase and placed in the sun. Each pair of the jerry can have a transparent acrylic surface that lets in Ultraviolet sun rays to destroy the formation of DNA linkages in microorganisms, thereby preventing them from reproducing and consequently disarming them.

The entire process of purification by heat and light only takes about two to six hours, and the water gets heated up to a 75 degree Celsius (167 Fahrenheit). A ‘smiley indicator’ by the side of the jerry can let the user know when the process is complete when a sad red face turns green and happy.

In Kenya, as in most African countries, water and sanitation crisis remains critical with 41 percent of the population being reliant on unimproved water sources and much more lacking access to potable water. Solvatten is solving these issues a jerry can at a time, working with both charity organizations and NGO’s to get the purifiers to households for little or no cost.

The solar-powered water purifier is present in over 20 countries globally, the majority in Africa. The purifier also helps reduce, and in some cases, avoid the use of firewood and charcoal to heat up water, consequently solving pollution issues as well.

The impact of Solvatten on households and communities far-reaching; portable water translates to better hygiene, improved health and improved quality of life. It also improves the environment by keeping it free from pollution. The solar-powered jerry can purifier is one innovation that contributes to reaching all the 17 Sustainable Development Goals by the United Nation. It is no surprise that three years ago, the UN recognized it as one of 16 companies truly making a difference in tackling climate change.