New Poll Reveals Urgent Need for More Petrol Price Monitoring Across the Nation, As 86% Nigerians Buy Above The Official Pump Price Per Liter

A new report released by NOIPolls to evaluate the price of Premium Motor Spirit (PMS) popularly called Petrol has revealed an urgent need for petrol price monitoring across the nation as 86 percent of petrol purchasing Nigerians buy above the official pump price of ₦145 per litre with an average price of ₦199 per litre nationwide. This finding is in line with the National Bureau of Statistics (NBS) petrol price watch report which revealed that Nigerians buy petrol at an average of ₦191 per litre in January 2018.

Although petrol scarcity appears to have ended especially in Lagos and the FCT, news reports have revealed that motorists in most states in Nigeria buy petrol at prices far above the official ₦145 per litre. In line with this, the Chairman of Depot and Petroleum Marketers Association of Nigeria (DAPMAN), Mr. Dapo Abiodun, informed the Federal Government, during a stakeholders’ meeting convened by the Federal Government to find a lasting solution to the recurrent and persistent fuel crisis in Abuja on January 3rd, 2018, that petroleum marketers could no longer sell petrol at ₦145 per litre mainly due to the rise in crude oil prices as a result of Hurricane Harvey in the US. He further explained that it led to a sharp increase in the landing cost of petrol which made the Nigerian National Petroleum Corporation (NNPC) the sole importer of petrol in the country. 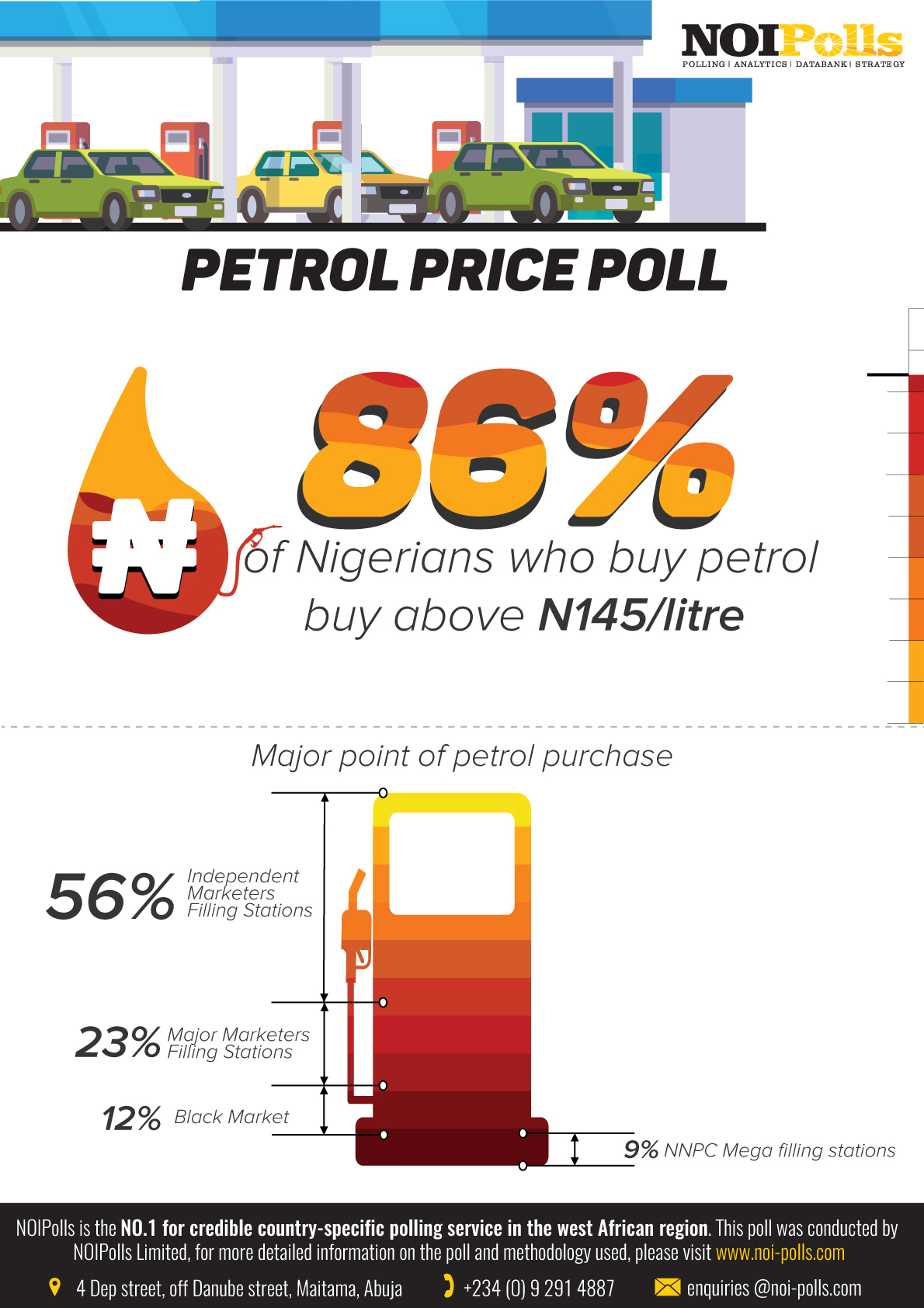 Furthermore, despite NNPC being the sole importer of petrol in the country, this poll has revealed that out of the 72 percent of Nigerians who buy petrol, 56 percent disclosed that they buy petrol from independent marketers’ filling stations where petrol is sold above the official rate of ₦145 per litre. It is therefore pertinent that all the stakeholders in the oil and gas sector, especially the Department for Petroleum Resources (DPR), intensify efforts towards price monitoring exercises to ensure that products allocated to each State of the federation are dispensed to buyers at the official pump price. These are the key highlights from the recent poll conducted to evaluate petrol scarcity across the country. The poll was conducted in the week commencing February, 5th, 2018.

In the last quarter of 2017, petrol scarcity resurfaced as long queues were seen in filling stations in most cities in Nigeria and petrol hawkers lurked around the major roads to sell petrol to willing buyers. The scarcity was allegedly due to the pronouncement of Petroleum and Natural Gas Senior Staff Association (PENGASSAN) to embark on a nationwide industrial action, scheduled to commence on the 18th, December 2017. It triggered panic buying across the country thus the return of long queues. While most petrol stations did not have petrol, the few ones that had sold above the official pump price of ₦145 per litre.The resulting impact of this scarcity was evident in the rise in transportation fares by almost 100 percent, which could also be attributed to the preparations for the yuletide season.

Similarly, on January 31st, 2018 precisely, it was rumoured that the Petroleum Tanker Drivers (PTD) branch of the Nigeria Union of Petroleum and Natural Gas Workers (NUPENG) had given a 15 day ultimatum as it threatened to stop dispatching petrol at some depots due to the bad state of some roads in the country. This further made petrol remain in short supply, with attendant high prices as it was alleged that some marketers were hoarding the product to make more money. Experience has shown that there is always a corresponding rise in the prices of goods and services whenever there is either an upward review of petrol price or scarcity in Nigeria. It is not different in this regard, as there have been a lot of complaints from Nigerians about the exorbitant price of petrol as a result of the petrol scarcity in the country. Against this background, NOIPolls conducted a poll to monitor the current price of petrol across the country.

The first question gauged the proportion of Nigerians who buy petrol and findings revealed that a vast majority (72 percent) of adult Nigerians confirmed they buy petrol, this may be either for their vehicles or to power other petrol powered machines such as generators, grinding machines etc. This response cuts across gender, geopolitical zones and age groups with each demography having over 50 percent of the respondents indicating that they buy petrol.

Poll results revealed that most Nigerians (56 percent) buy petrol from Independent Marketer’s filling stations and residents from the South-East had the highest percentage of respondents in this category with 78 percent representation. While 23 percent mentioned Major Marketers’ filling stations, it is interesting to note that 12 percent of the respondents buy from Black Market sellers (Street Hawkers) and only 9 percent indicated that they buy from the NNPC Mega Stations.

The prevailing price of petrol was also ascertained and results revealed that an overwhelming proportion (86 percent) of Nigerians disclosed that they buy petrol above the official price of ₦145 and this assertion cuts across gender, geopolitical zones and age groups with each demography having over 70 percent of the respondents indicating that they buy petrol above the official price in their respective region. Further analysis revealed that of all the various prices mentioned by respondents, Nigerians buy a litre of petrol for an average price of ₦199 nationwide. Also, residents in the North-West zone pay the highest average price of ₦221 for a litre of Petrol, while the respondents resident in the South-West zone pays the lowest average price of ₦179 per litre.

In conclusion, this poll has revealed that although petrol scarcity seems to have disappeared, most Nigerians buy petrol above the official price of ₦145 per litre and at an average of ₦199 per litre nationwide. Also, the poll finding has shown that majority of Nigerians buy petrol from Independent Marketer’s filling stations across Nigeria and almost all of the respondents claimed that they buy at a price that is above the pump price. This is a wakeup call for the NNPC, DPR and other government parastatals in charge of monitoring and regulation to ensure that the official pump price of ₦145 per litre is strictly adhered to by the marketers and to also make certain that they continue to arrest and prosecute marketers found to be involved in the hoarding and diversion of petroleum products.

Finally, the NNPC, Major marketers and Independent marketers must synergize to resolve the issues resulting in price challenges which had made the dispensing prices vary among various marketers of the product.

Food prices soared in October, the consumer price index (CPI) report released on Monday by the National Bureau of Statistics (NBS) has shown. According to its...
Read more

Average transport fare for bus journey rose by 4.03 per cent in October – NBS

The latest data released by the National Bureau of Statistics (NBS) revealed that ‎the average transport fare for bus journey within cities‎ ‎in the country increased by...
Read more

The average price for the refilling of a 12.5kg cylinder for Liquefied Petroleum Gas (Cooking Gas) decreased by -0.63% month-on-month and by -0.32% year-on-year...
Read more
- Advertisement -