The Mark of Externalisation in the DMO’s Data

The sort code is a number which usually identifies both the bank and the branch where an account is...
Read more
- Advertisement -
The FGN’s domestic debt stock amounted to N12.59trn (US$41.1bn) at end-December, equivalent to 11.1% of 2017 GDP. The increase of just N90bn in Q4 is largely a function of the FGN policy of “externalization” of its debt obligations (the deployment of Eurobond sales proceeds to pay down naira-denominated NTBs on maturity).
A rise of N300bn in the stock of FGN bonds is partly balanced by a decline of N200bn in the stock of NTBs. This domestic debt stock/GDP ratio is very healthy for a sovereign rated B+/B. It is, therefore, a core element of the FGN/DMO narrative.
To expand federal into public domestic debt, we have to add: the bank borrowings of state governments, which the DMO estimated at N3.35trn, their outstanding bonds, the bonds issued by AMCON, and the debts of the NNPC and other public agencies.
There is also the grey area of FGN debts to contractors and other private- sector players incurred by the previous administration and unearthed by the federal finance ministry in December 2016. The total was initially estimated at N2.2trn although we have seen figures of up to N3.4trn. These claims are to be verified and then securitized. Their inclusion would push up the public domestic debt stock to around 25% of 2016 GDP.
This is the worst-case scenario. In line with established practice, it excludes the CBN’s many credit lines and the FGN’s contingent liabilities such as guarantees. 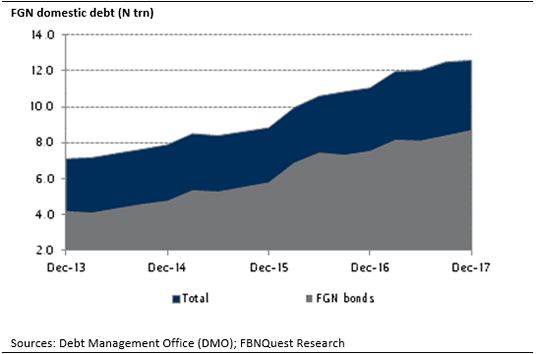 The principal change since end-December has been the FGN’s return to the Eurobond market in February to raise a further US$2.5bn. The ministry announced at the time that its agenda was again externalization.
FBNQuest

The FGN Bonds market traded with mixed sentiments today, with some demand seen on the mid-end of the curve (2027s -2029s) while the long...
Read more
- Advertisement -