World Health Day is observed on the 7th of April annually which also coincides with the anniversary of the World Health Organization. The World Health Organization (WHO) is an agency of the United Nations that focuses on the public health of the world at large. The day focuses on increasing life expectancy by promoting healthier living habits as well as highlighting current global health priorities across the world. The main theme for 2018 is “Universal health coverage: everyone, everywhere” #HealthForAll – ensuring that everyone, everywhere can access essential quality health services without facing financial hardship. Making and sustaining progress towards Universal health coverage (UHC) requires strong and sustained political commitment, therefore, WHO is calling on world leaders to live up to the pledges they made when they agreed on the Sustainable Development Goals (SDG) in 2015 and to commit to concrete actions to advance #HealthForAll. 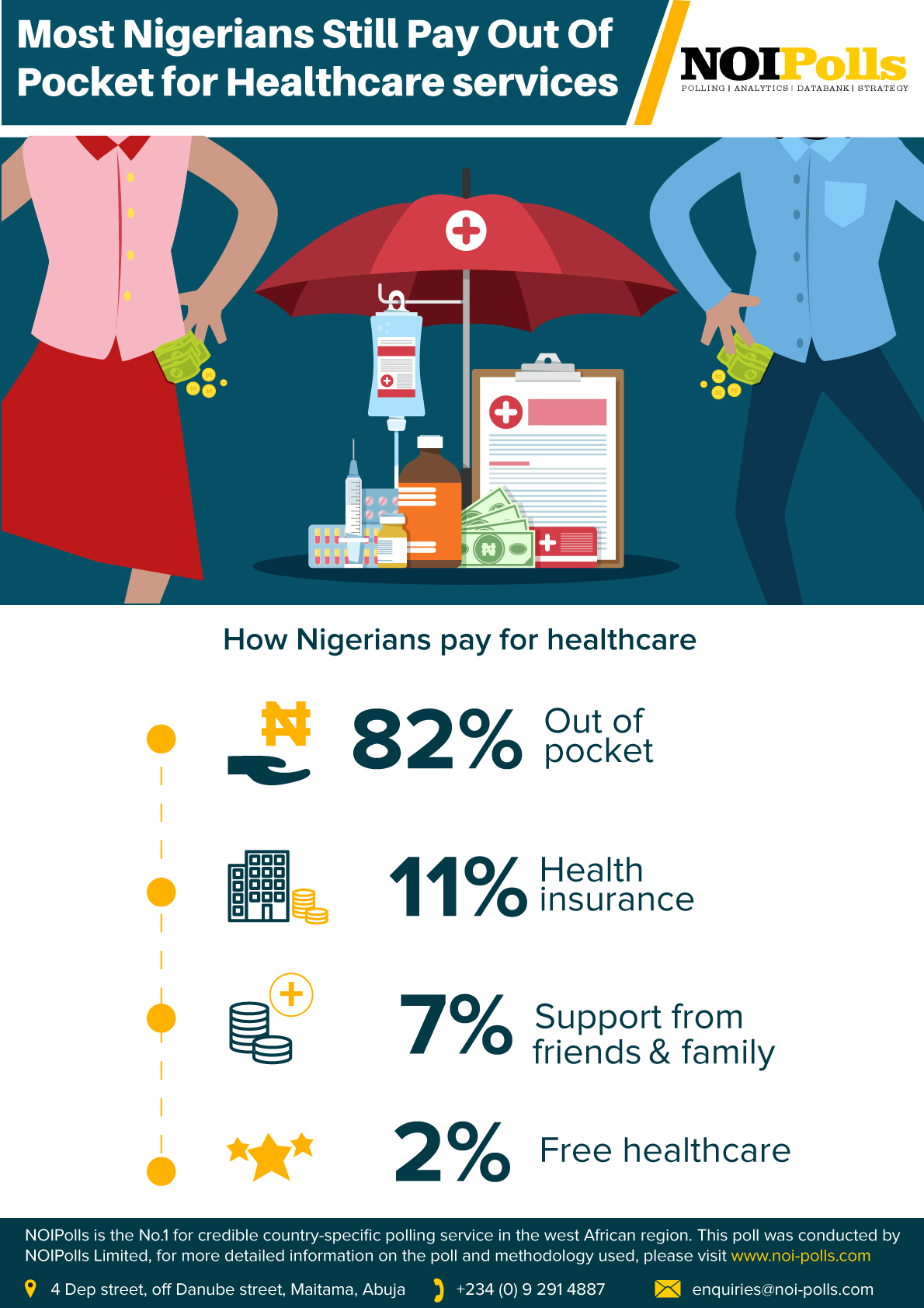 In commemoration of the 2018 World Health Day, NOIPolls reflects on findings from its past poll on Health conducted in August 2017, which gauged the perception of Nigerians regarding their health insurance coverage in the country. The poll revealed that the rate of Out-of-Pocket (OOP) or alternatively, Point-of-Service (POS) payments for healthcare services are alarmingly high in Nigeria, with 82 percent of respondents reporting they pay OOP and another 5 percent revealed that their health services are paid for by friends and family. Given that the payer in the case of the latter may be an individual or organization, it can be assumed that they are out of pocket. Coverage of insurance, either private or social insurance, remains very low at 11 percent, consistent with existing national surveys, and only 2 percent reported receiving free health care. Analysis on age-group showed that more of the young and elderly have someone else who pays for their healthcare than the middle-aged group.

Health insurance coverage rates are highest in the North-Central (17 percent) and the North-East and South-West (13 percent each) zones than elsewhere in the country, compared with the 11 percent overall coverage, making OOP rates higher in the Southern region (84 percent) compared with the North region (78 percent). There are no striking differences between male and female in these measures.

Quality and affordable healthcare is critical to viable development and progress because it is human capital that drives the other factors of production. Health infrastructure (hospitals, laboratories, pharmaceuticals, health insurance organizations and other ancillaries) are essential for an efficient functioning healthcare system and consequently, a productive and prosperous nation. Despite some positive strides recorded in the Nigerian health sector over the years especially the (NHIS) act of 1999 which still remains the only reliable health insurance scheme in the country for majority of citizens, public health care sector is still bedeviled with a myriad of challenges that caused by decades lack of planning and policy interruptions.

A clearer picture on the state of Nigeria’s health sector is painted in her ranking on the World Health Organization global ranking of health care systems which placed Nigeria 187 out of 191 countries falling far below neighboring African countries such as Ghana, Togo, Niger, Mali, Chad who ranked better with 135, 152, 170, 163 and 178 respectively. This implies that the country’s health care system is only better than that of four countries, Democratic Republic of the Congo, Central African Republic, Myanmar and Sierra-Leone. Going by the above, Nigeria has a lot of work to do in improving its health systems and making healthcare affordable and accessible to the millions of Nigerians who are not getting the health services they require. Additionally, according to Nigeria Health Watch, an online health magazine which focuses on all aspects of health care services, management and delivery in Nigeria, the Government has to take a three-pronged approach to ensure it achieves universal healthcare for every one; implement the bill signed in 2014 to fund the Basic Health Care Provision Fund (BHCPF) with 15 of the Consolidated Revenue Fund, enforce regulation that makes health insurance provision compulsory for all corporate organizations and ensure accountability and transparency from the Health Management Organizations (HMOs).

Summarily, the survey proves that there is urgent need for interventions in the Nigerian health system to reduce the incidence of out-of-pocket health expenditure. The proportion of the population covered by financial risk protection in healthcare utilization is too low at 11 percent, compared to a benchmark of 90 percent for an efficient health system, and this is a reflection of how far the country lags in the race towards universal health care coverage. High out-of-pocket (OOP) rates are associated with low uptake of preventive health services, weak management of health care and causes situation where patients wait till they are too sick or the situation becomes an emergency before they seek for healthcare services. The poor segment of the population would likely not seek healthcare due to their inability to pay, and this further weakens the performance of the health system in terms of its ability to protect the weak.

In conclusion, the survey found that 82 percent of respondents make Out-Of-pocket Expenditure (OOE) for healthcare and is consistent with the current National Health Account for Nigeria, which found that OOE is 70 percent. Too many Nigerians suffer financial hardships when they make catastrophic health expenditures. Evidence shows that some healthcare expenditures can push people further into poverty. A way to reverse this high OOE is for government at all levels in Nigeria to demonstrate the required political will for Universal Health Coverage. A quick way of achieving this is to increase health insurance coverage. It is gratifying that at least 10 Nigerian States have signed health insurance laws to help in achieving equitable and sustainable health financing mechanism. Functional State health insurance schemes will help increase the pool of individuals with health insurance thereby driving down premiums.

Important steps needed to be taken include but not limited to urgent expansion of social health insurance across the country to guarantee financial risk protection to the population and reduce the incidence of out-of-pocket payments by households. The National Health Insurance Scheme (NHIS) needs to support the states to establish their State health insurance schemes and contribute to funding the coverage of the vulnerable population groups namely – young children under age 5, pregnant women not covered by formal health schemes, the elderly population and the economically indigent population.

Abuja, Nigeria. August 27th, 2019 – The Nigerian health system has been evolving over the years through various health care reforms aimed at tackling the...
Read more