FLOUR MILL recently released its FY’18 financial results showing a 3% y/y rise in revenue to ₦542.7 billion and a notable 54% y/y jump in PAT to ₦13.6 billion. The impressive y/y performance was, however, weaker than we had expected. Particularly, profit before tax came in 39% lower than our ₦18.3 billion estimates following a markedly weak performance in Q4 (Jan-Mar 2018 period).

With Q4 revenue printing 13% lower than we had expected and gross profit down to ₦12.7 billion vs. our ₦20.5 billion forecast (Q3’18: ₦19 billion), gross margin weakened to 11.1% in the quarter (Vetiva: 14.5%, 9M’18: 13.1%). Given that wheat (predominantly imported) is FLOURMILL’s major agricultural input, we believe input costs must have been bloated by the sharp rise in global wheat prices so far this year – up c.15% ytd. Furthermore, an unusual spike in Operating expenses, as well as higher than expected debt servicing figure, culminated in a ₦3.0 billion loss before tax in Q4. The weak Q4’18 performance reminds us of an equally weak Q4’17. Hence, we look forward to Management’s clarity and guidance at the FY’18 Conference Call scheduled for July 5, 2018. However, supported by stronger
performances recorded in earlier quarters, profit before tax registered at a 7-year high of ₦16.5 billion, outpacing the ₦10.5 billion recorded in FY’17.

Top line growth of 3% fell short of the company’s 5-year CAGR of 10% and below our 7% estimate. We attribute this to a weaker Q4’18 performance as well as the high base from FY’17 where revenue surged 53% supported by both price increases and volume growth. Whilst the Food segment (largest contributor, 80%) managed a 2% y/y growth amidst limited changes in pricing and a flat volume base, the Agro-Allied businesses recorded a 13% y/y rise in turnover. Despite the modest growth in Agro-Allied, we note that performance within the sub-sector has been mixed – with revenue moderating successively in every quarter – amidst the tough operating landscape for edible oils, animal feeds and sugar businesses.

In a bid to deleverage its business, FLOURMILL raised c.₦40 billion through a Rights Issue that was finalized earlier this year. We expect this to impact earnings in FY’19. Notably, short-term liabilities (including bank overdrafts) moderated 35% y/y in FY’18 as the company dedicated 75% of its rights proceeds to repayments of these facilities. Supported by this, and a stable interest rate environment, we expect net interest expense to moderate 38% y/y in FY’19, with debt-to-equity ratio improving to 0.9x (FY’18: 1.0x, FY’17: 2.4x). We are optimistic for even further improvement in FLOUMILL’s debt mix, given plans to refinance expensive short-term debt with ₦70 billion in medium-term notes and also to sell off some of its real estate assets to further reduce financial leverage. Given the still opaque timelines and details for these plans, however, we are yet to factor this into our model.

Read Also:  BBM not dead: All what we learnt from BBM’s first-ever event in Nigeria - BBM Messenger Digital and Mobile Innovation Event 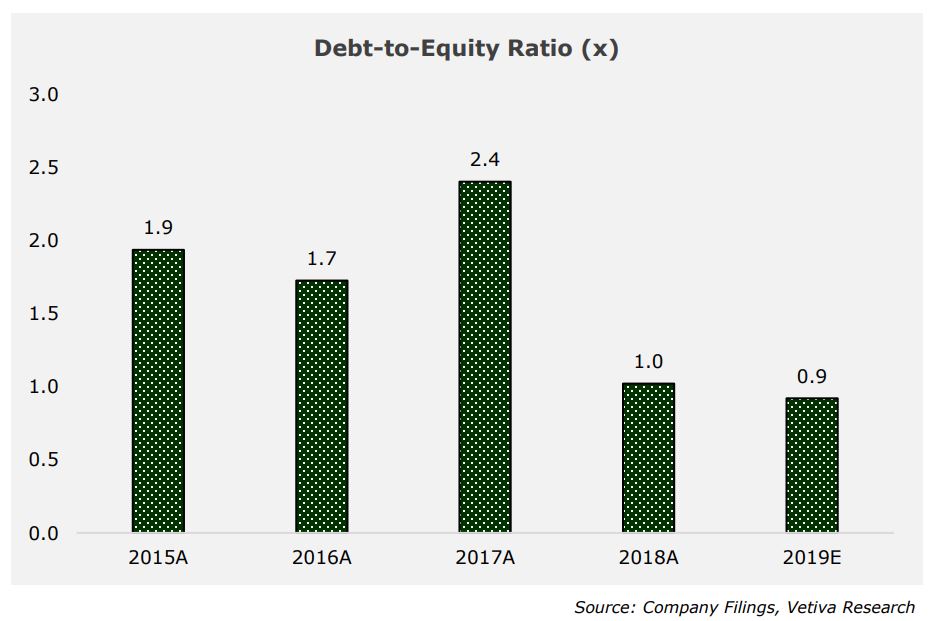 We are less optimistic about price increases in FY’19, hence, we have revised our revenue expectation to ₦571 billion – translating to a 5% y/y growth (Previous: 7%). We expect the sustained recovery in demand to support this growth. Furthermore, sales benefits are expected to accrue from the company’s continuous investments and plan to strengthen its Food business value chain with ₦10 billion raised from the rights issue (25% of rights proceeds to support working capital base). The outlook for the Agro-Allied segment remains mixed as livestock feeds business still struggles with tough market realities, whilst capacity in sugar business ramps up.

We expect gross margin to remain volatile as the outlook for wheat prices remains strong. Hence, we revise our gross margin estimate for FY’19 to 12.7% (Previous: 13.1%, FY’18: 12.7%). Whilst the rise in flour mills operating expenses appears broad-based and inflation driven, we believe spikes in Q4’18 were one-off and thus maintain our 4.6% OPEX to sales ratio forecast (FY’18: 4.8%), way below pre-2017 levels of c.7.7%. Thus, we forecast an EBIT margin of 8.4% for FY’19 (FY’18: 8.9%). Whilst earnings are expected to be supported by moderation in net interest expense, we also forecast normalization in the other operating income line, which was primarily bloated by gains on exchange differences and government grants. Supported by the notable moderation in interest expense, however, we expect PBT
margin to expand 190bps y/y to 4.9% (Previous: 5.3%). And with this, we cut our FY’19 PAT forecast for FLOURMILL to ₦19.8 billion (Previous: ₦21.8 billion) – representing a 45% y/y bottom line growth. However, given the 56% increase in shares outstanding, EPS estimate for the year comes in 7% lower y/y at ₦4.82. With a constant dividend payout ratio of c.20%, we forecast dividend per share of ₦0.96 (FY’18: ₦1.00; Dividend yield: 2.8%). Major risks to our outlook include a stronger than expected rise in global wheat prices and adverse exchange rate movements. Our 12-Month Target Price for FLOURMILL is revised to ₦40.99 (Previous: ₦45.45). 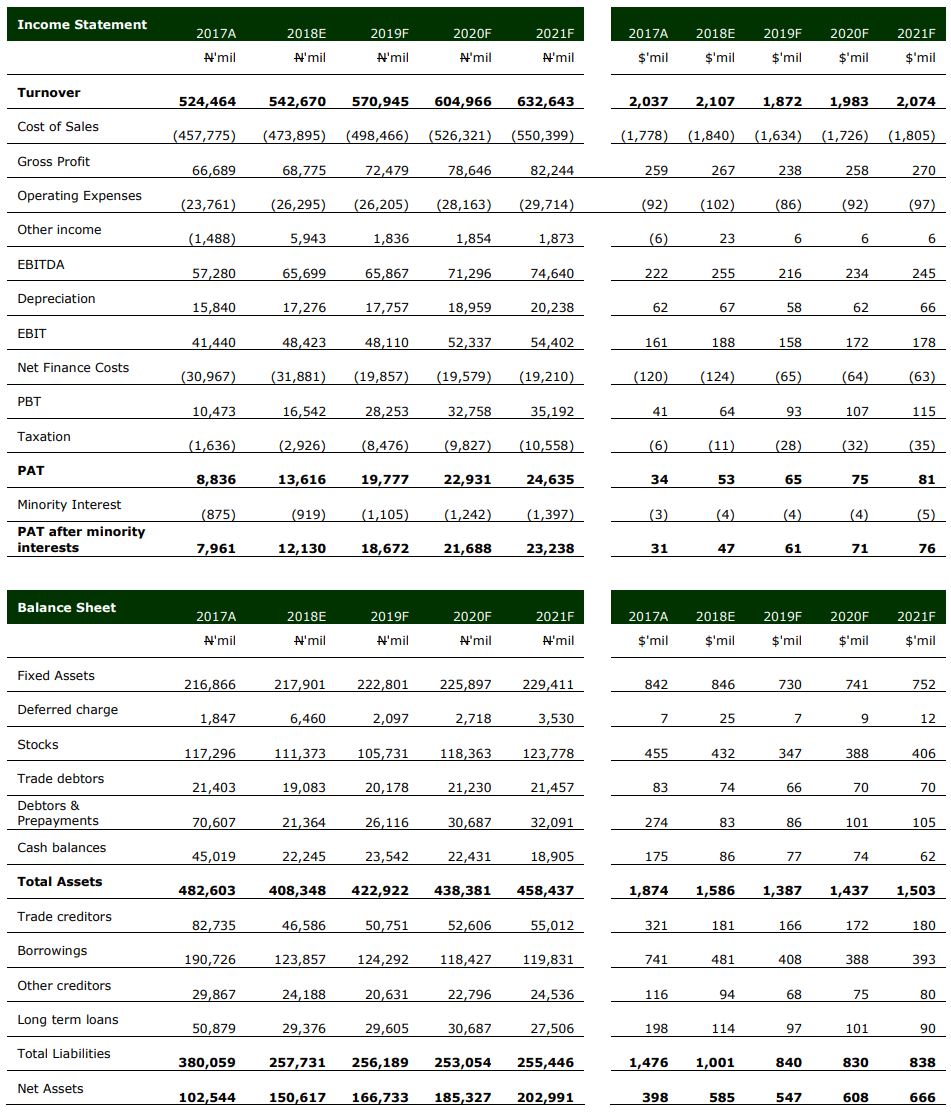 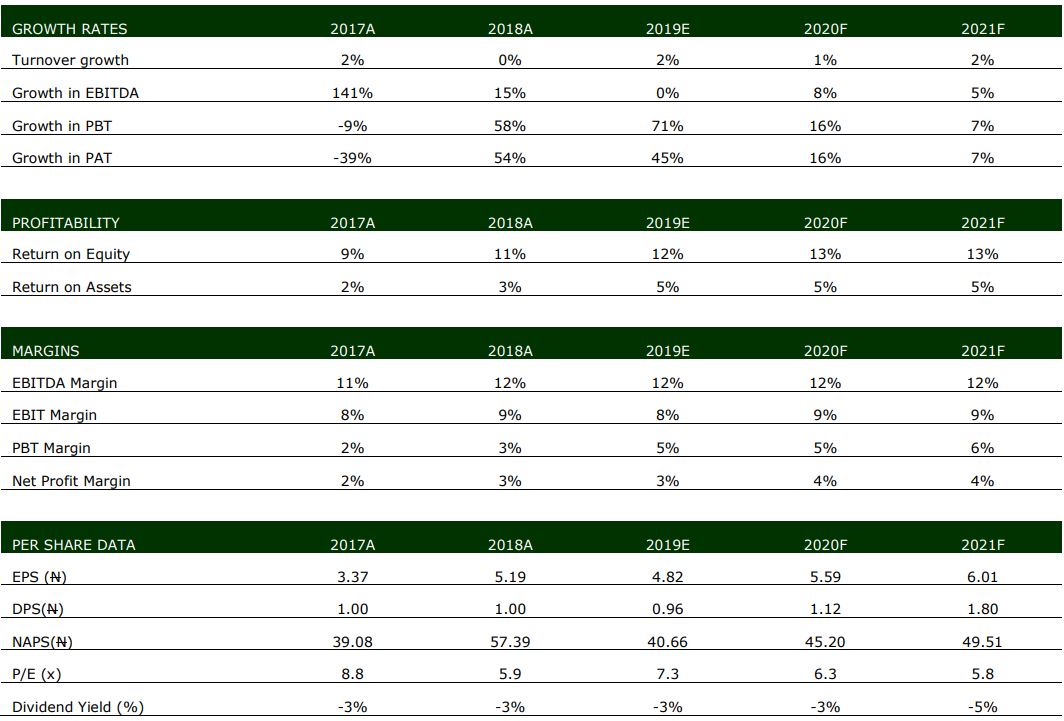 Committed to the continuous empowerment of the Nigerian financial market and the provision of uninterrupted services to all stakeholders, FMDQ Securities Exchange Limited (FMDQ...
Read more

Committed to providing uninterrupted services to all stakeholders in light of the activation of remote working for employees of FMDQ Holdings PLC (FMDQ Group...
Read more