Data released in August showed the frail state of the economy. Nigeria’s economy grew by just 1.5% y/y in Q2’18, below Vetiva and Consensus estimates of 1.6% and 2.0% respectively, dragged by a slump in agriculture output. The sector grew at just 1.2% y/y in the quarter, the slowest in 25 years, hinting at the economic repercussions of the violence in the Middle Belt which worsened at the turn of the year. The inflation picture was likewise underwhelming as consumer prices rose 11.1% y/y in July, down slightly from 11.2% y/y in June following strong month-on-month food inflation of 1.4%. Without a coherent plan to tackle the scourge in the nation’s primary source of food or resettle affected groups, the threat of food insecurity will become more pronounced. Looking ahead, there is very little to cheer. Whilst the recovery in oil production is welcome amid still high oil prices, neither the manufacturing nor services sector has shown signs of sustainable growth. Meanwhile, the electioneering wheels are kicking into gear, with September likely to be an active month ahead of major party primaries scheduled for September and October.

Key stories in the month

Data from the National Bureau of Statistics (NBS) indicated that the Nigerian economy grew by 1.5% y/y in Q2’18, the lowest growth since Q3’17. Whilst the services sector posted a strong recovery (2.6% y/y) on the back of a strong expansion in telecoms, both manufacturing (0.7% y/y) and agriculture (1.2% y/y) output growth slowed significantly. Finally, pipeline leaks during the period cut realized oil output from 2.00 MB/d to 1.84 MB/d, although production should rebound in subsequent quarters. 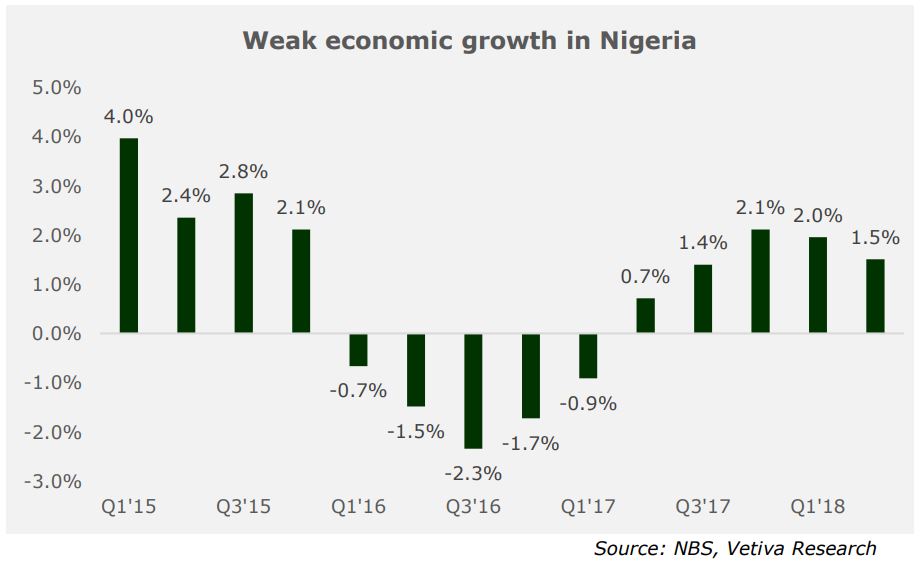 Capital imports into Nigeria dipped from $6.3 billion in Q1’18 to $5.5 billion in Q2’18 largely on the back of declines in foreign portfolio inflows (10%) and other
investments (24%). The decline in FPI could be attributed to a 24% drop in inflows to money market instruments which had accounted for 77% of FPI in Q1’18 (down to 65% in Q2’18) as inflows to bonds and equities improved in the quarter.

Looking ahead, further monetary tightening in the United States and the closeness of Nigeria’s national elections would likely depress capital imports in the coming quarters.

Annual inflation moderated 0.1 percentage points to 11.1% y/y in July as month-on-month inflation also moderated 0.1 percentage points to 1.1%. Similar declines were observed across food prices (from 13.0% y/y to 12.8% y/y) and core prices (from 10.4% y/y to 10.2% y/y). Our forecasts indicate that August inflation is likely to rebound to 11.2% y/y, driven by resurgent food price pressure and a weaker base.

Nigeria’s external reserves declined from $47.1 billion at the end of July to $45.9 billion at the end of August, the lowest figure since late March. There are a number of relevant factors contributing to this trend. First, we note that Nigeria raised a $2.5 billion Eurobond in February which boosted reserves and may have camouflaged the underlying trend of flat reserve accretion. Second, Nigeria’s oil production declined c.150,000 bpd from Q1 to Q2 as a result of
pipeline leaks, and although prices were stronger in Q2 ($75/bbl vs. $67/bbl in Q1), this would have impacted oil earnings. Finally, and most importantly, the moderation in reserves may point to greater CBN intervention in the currency market in recent times given the broader pressure on emerging market currencies amid a harsher global backdrop. In any case, reserves remain strong and hover around four-year highs, suggesting the CBN retains the ammunition to defend the currency and supply the market. 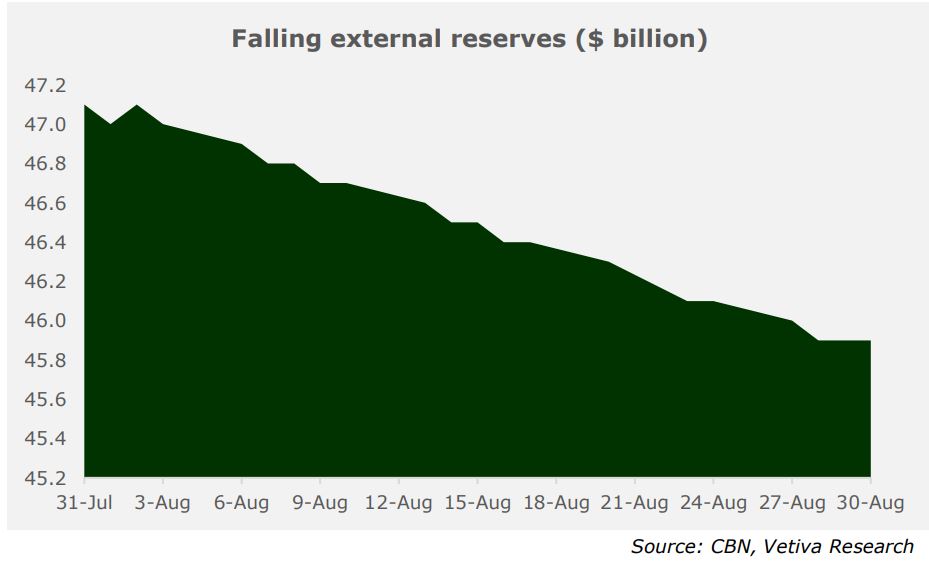 Nigeria’s public debt stock declined from ₦22.7 trillion in Q1’18 to ₦22.3 trillion in Q2’18, driven by a 2% y/y fall in domestic debt following relatively weak Tbill and bond sales during the period amidst T-bill maturities. We note that the recent rise in local market yields would likely pressure government debt servicing, and so will rising global interest rates amid U.S. Fed tightening and a bearish risk appetite towards frontier markets.

After a slump in May and June, Nigeria’s oil production strengthened at the start of the third quarter, rising by c.70,000 bpd between June and July according to both the Ministry of Petroleum Resources and the Organization of Petroleum Exporting Countries (OPEC).

The rebound in output came on the back of the lifting of Force Majeure on Bonny Light exports in late July and no further material production disruptions in recent weeks. Production is expected to remain stable in the coming months, though Nigeria is unlikely to reach its 2018 Budget target of 2.3 mb/d, with production currently just below 2.0 mb/d (2018 peak: 2.1 mb/d).

The Central Bank of Nigeria (CBN) enacted a differentiated cash reserve ratio regime (CDRR) where deposit money banks (DMBs) can request a refund of a portion of the CRR to provide credit facilities for greenfield and brownfield projects in agriculture and manufacturing. The objective of the scheme is to incentivize banks to lend to agriculture and manufacturing firms, who currently receive just 3% and 13% of bank loans despite accounting for 23% and 9% of the economy and employing 48% and 7% of Nigeria’s labour force. According to the CBN, loans granted under the scheme must have a  minimum tenor of seven years, a maximum size of ₦10 billion and cannot be for the purpose of refinancing existing loans.

Crucially, the interest rate on the loan cannot exceed 9%. In our view, this is a clever method of directing credit to critical sectors of the economy but we stress the need to ensure proper risk management and oversight given the dangers of extending credit to riskier economic groups at low-interest rates.

The Central Bank of Nigeria (CBN) also initiated a Corporate Bond funding program where large corporations are encouraged to issue long-term corporate bonds (minimum of seven years) that the apex bank may invest in. Whilst we see this as another mechanism for directing cheap credit to the real economy, the modalities of this program remain somewhat unclear and may share features of quantitative easing programs used in developed markets where central banks purchased a range of long-term debt from governments and corporates in order to reflate credit markets. The results of these programs have been mixed, and any application of QE-methods must be done carefully.

Read Also:  Nigeria's Unemployment Rate Increases By 4.3% In One Year

International Monetary Fund (IMF) expectations for the rest of 2018 began to play out as the U.S. economy enjoyed the annualized growth of 4.2% in Q2 (initial estimate: 4.1% y/y), the fastest pace since Q3’14, putting the economy on pace to better its recent impressive y/y growth. With the Fed’s preferred gauge of inflation remaining sturdy at the 2% target and the economy shaking off any effects of President Trump’s controversies, another rate hike in September is almost assured. In contrast, Euro Area activity looks to be cooling as data from the European Commission pointed to a big drop in consumer confidence on the back of labour market worries. Although unemployment in the bloc has been declining in recent years, it remains high in notable countries—France, Italy, Greece. Greece actually made a final exit from a nine-year bailout series initially caused by the 2007/2008 financial crisis. On the other hand, Italy’s debt woes continued as the Southern European nation sold debt worth €7.75 billion at four-year highs during the month. 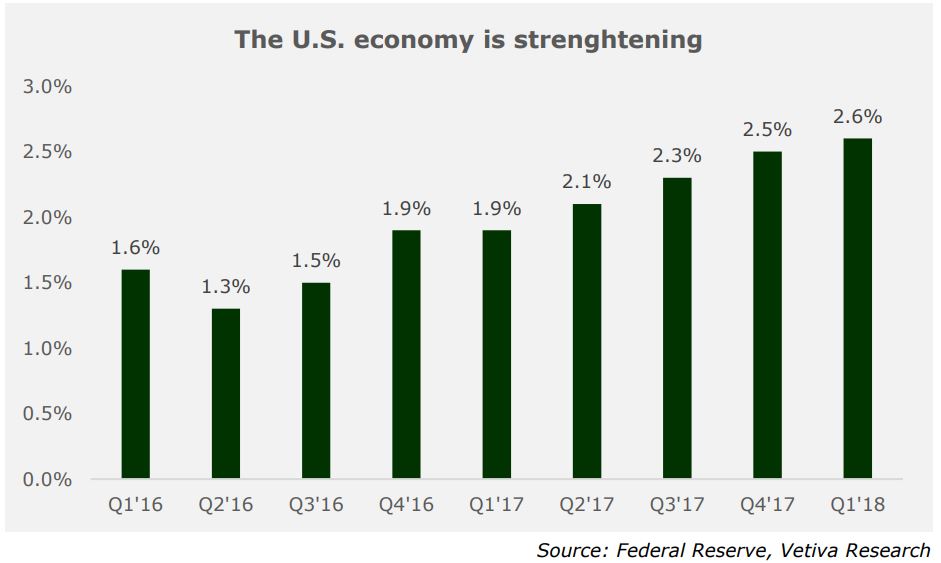 Trade issues persisted in August as talks between the United States and China broke down, paving the way for president Trump to impose tariffs on $200 billion worth of Chinese goods in the coming months. On a more positive note, the U.S. and Mexico made headway on reforming the North American Free Trade Agreement (NAFTA), a Clinton-era multilateral treaty between the U.S., Canada, and Mexico which president Trump vowed to tear up on his campaign trail. Canada still needs to ratify the changes before each country presents the deal to their relevant legislative bodies, but progress here is a welcome contrast to the deterioration in U.S.-China talks.

Finally, oil prices strengthened in the second half of August as an Energy Information Administration report indicated a large drop in global crude stockpiles and as markets braced for the impact of U.S. sanctions on oil exports from Iran. Although OPEC output (excluding Iran) probably rose in August, supported by rebounding production in Nigeria and a 136,000 bpd increase in Saudi Arabia, the group’s aggregate output may be dragged down by Iranian troubles, providing further support to global oil prices. 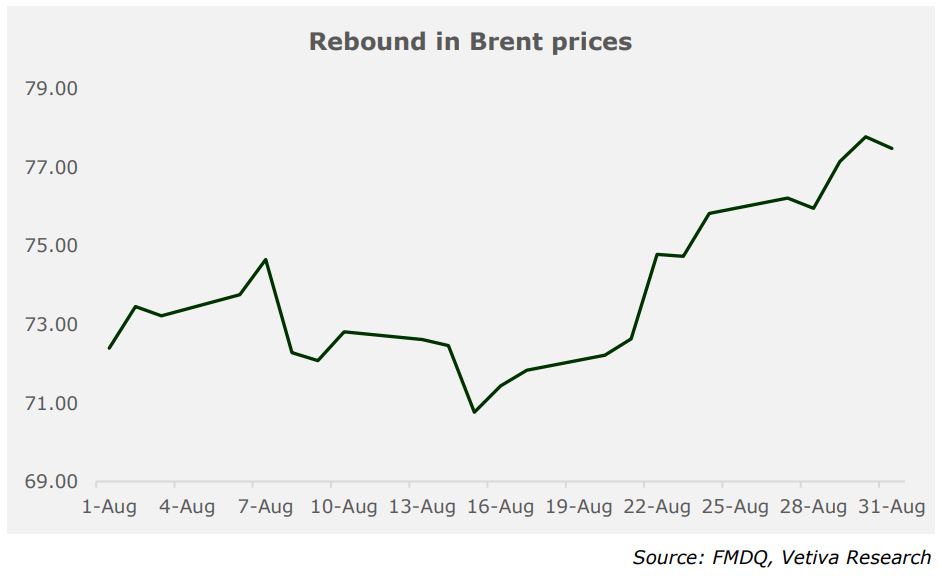 What to look out for in September…

In March 2021, OPEC revised its expectation for oil demand for the year to 96.27 Mbpd (from 96.05 mbpd), while OPEC+ maintained existing production...
Read more
- Advertisement -