There was a spike in Consumer Price Index (CPI) across emerging economies in the month of July 2018, as the average CPI (which measures inflation rate) of emerging economies prints at 3.4% compared to 3.1% recorded in the previous month.

We see inflation rate maintaining the current high levels across emerging economies in the short-to-medium term as supply shortage of crude oil in the international market is expected to keep crude oil price above $70pbl threshold for the remaining part of 2018. 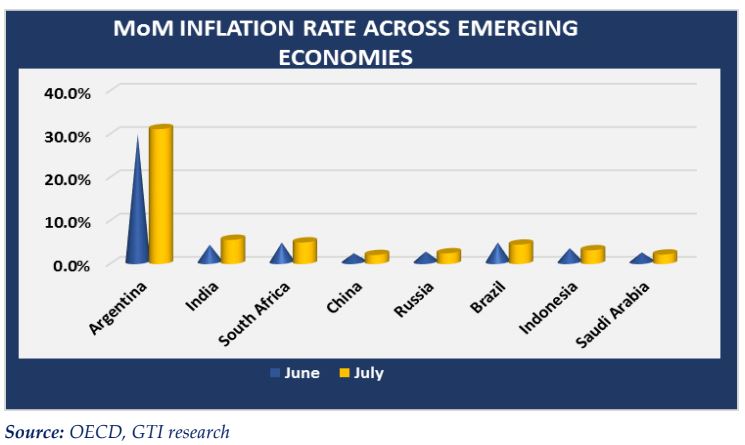 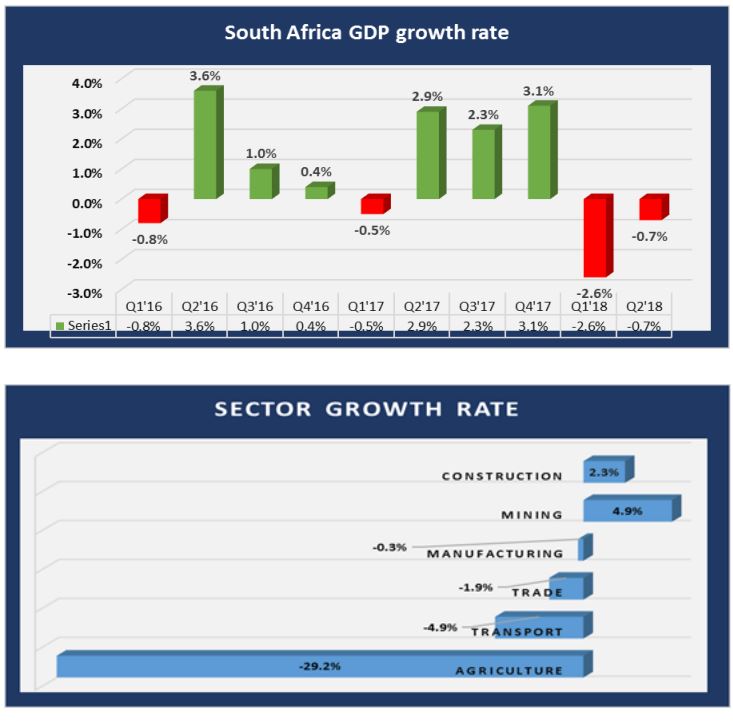 According to the latest Q2 GDP report released by Statistics South Africa (SSA), South Africa, Africa’s second largest economy by GDP size has slipped into
technical recession following a second consecutive contraction in GDP size. The GDP contracted by 0.7% in Q’2 18, after an earlier contraction of 2.2% in Q1’ 18.

The downturn in the Agricultural sector was largely driven by a decline in the production of field crops and horticultural products due to continued drought
conditions in Western Cape and severe hailstorm in Mpumalanga which destroyed several farm crops. Transport industry contracted largely as a result of decreased activity in both land and air transport, while trade and manufacturing contacted due to subdued sales and fall in production equipment.

We believe the recent trend in the U.S. labour market could be attributed to the corporate tax cut (from 35% to 21%) and the several trade protectionism policies by the Trump led administration. However, we believe this might spike U.S. inflation rate in the medium-to-long term due to a spillover effect from the ongoing trade war between the U.S. and her major trade partner, China. 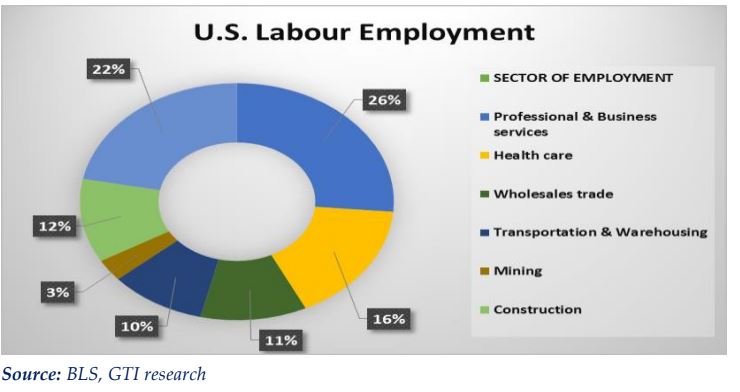 According to the foreign trade statistics report for Q2’ 18 released by the National Bureau of Statistics (NBS), the total value of Nigeria’s merchandise trade in Q2’ 18
shrank by 8.9% from ₦7.21 trillion in Q1’ 18 to ₦6.57 trillion. The contraction in total trade value in Q2’18 was mainly driven by the decline in both imports and exports commodities. 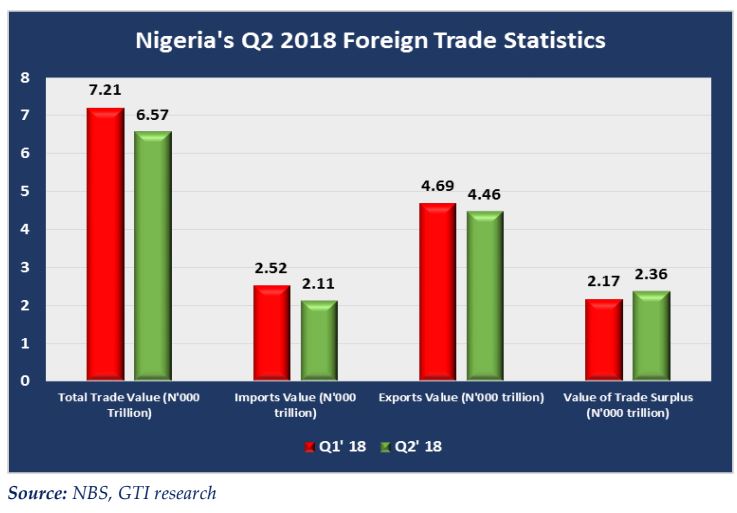 In Q3, we expect the value of total merchandise trade to improve slightly due to increase in price and output level of crude oil; trade surplus to be maintained; imports and exports value to expand slightly due to seasonality.

The average total power generation in Nigeria dropped by 12% in Q2’ 18 for the Q1 level of 92,747MWH to 81,561MWH. This is according to the power sector report
released by the National Bureau of Statistics (NBS). 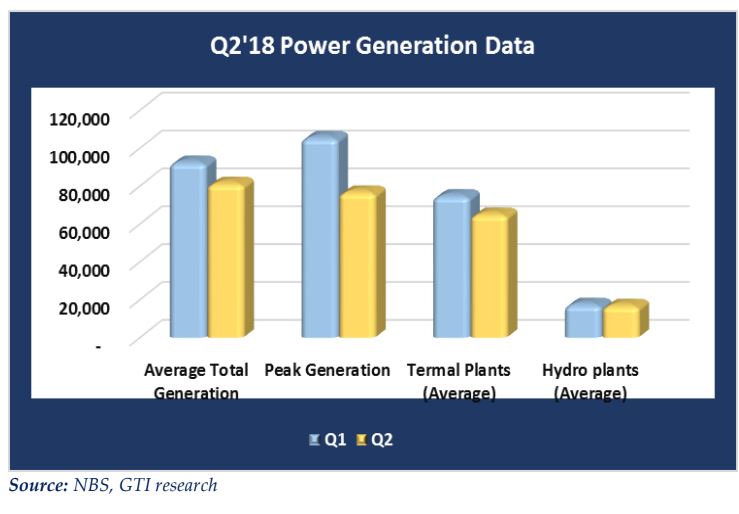 However, there were only three (3) cases of power generation collapse in Q2 compared to seven (7) recorded in Q1. This indicates a 57.14% improvement in the number of power generation system collapse cases. The total number of customers with prepaid meters also increased slightly by 1.59% to 1.62 million customers in
Q2’18 from 1.59 million in Q1’18. 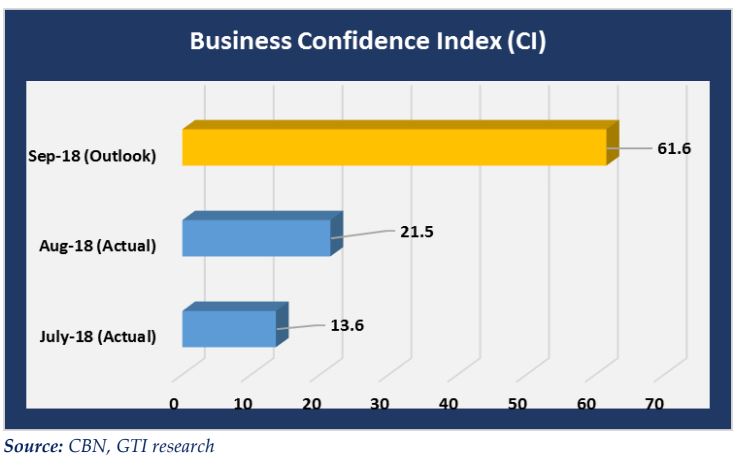 The equity market on Friday continued its free fall as selloff pressure drove the market to shed 0.21%. The ASI sank further after a major rally on Tuesday to close the week at 34,037.91 index points, while market capitalisation closed at ₦12.426 trillion.

We guide investors to trade cautiously in the short term amidst continued selloff. However, we believe investors can take advantage of the current cheap price(s) of stocks with strong fundamentals in order to reap medium-to-long term benefits. 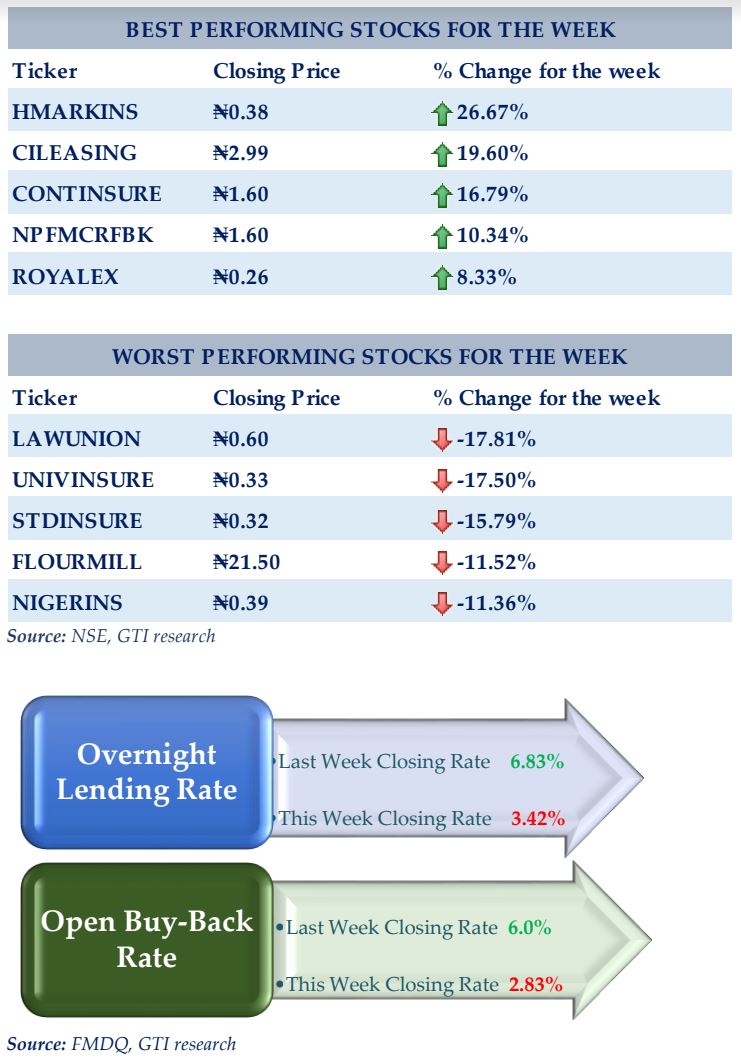 Strong liquidity persisted in the inter-bank market this week as the Overnight lending rate closed for the week at 3.42%, shedding 341bps w/w, while the Open
Buy-Back (OBB) rate shed 317bps w/w to close at 2.83%. The strong liquidity was aided by inflows from matured OMO bills to the tune of ₦452 billion, worsened
by persistent liquidity from the previous week “No OMO auction” and FAAC allocation. These put together overshadowed the $210 million CBN FX sales on
Tuesday, while OMO auction was put on hold for the second week running.

In the next trading week, there will be fresh inflows of ₦240 from maturing OMO instrument, and we expect the CBN to continue the usage of FX sales liquidity mop-up approach to check excess liquidity given investors recent resistant to OMO instrument.

Activities in the Treasury bills market this week ended on a bearish note as average yield across the curve appreciated by 78bps from the previous day level. Weak
demand by market players led to an upward review in offer rate, mostly the 91 days and 182 days maturing bills.

In the next trading week, specifically on Thursday 13th September 2018, we expect the CBN to offer for sale, 91 days,182 days and 364 days Treasury bills instrument to rake-in excess liquidity.

Transactions on the Nigerian Equity Market closed w/w on a negative note despite the market recorded gains in three out of the four trading...
Read more

The prices of poultry products in Nigeria are at their highest levels ever as the country faces its worst food inflation in at least...
Read more
- Advertisement -