Last Friday, the Nigerian Stock Exchange announced the suspension of Skye Bank’s shares from trading on the floor of the Exchange effective Monday, 24 September 2018. This was on the back of the recent regulatory action taken by the Central Bank of Nigeria (CBN) to revoke Skye Bank’s license and in the exercise of the powers of the Exchange pursuant to the Rules on Suspension of Trading in Listed Securities, Rulebook of The Exchange (Issuers’ Rules).

After trading hours on Friday 21st of September, the CBN announced – with immediate effect – the revocation of Skye Bank Plc.’s license due to the inability of existing shareholders to recapitalize the bank, following results from the Apex bank’s examination and forensic audit, which showed that the bank was in dire need of recapitalization. Thus, the CBN in consultation with the Nigerian Deposit Insurance Corporation (NDIC) formed a bridge bank named “Polaris Bank” to take over the asset and liabilities of the defunct bank while assuring the general public of the safety of their funds. The CBN also stated that the bank will resume normal banking activities today. 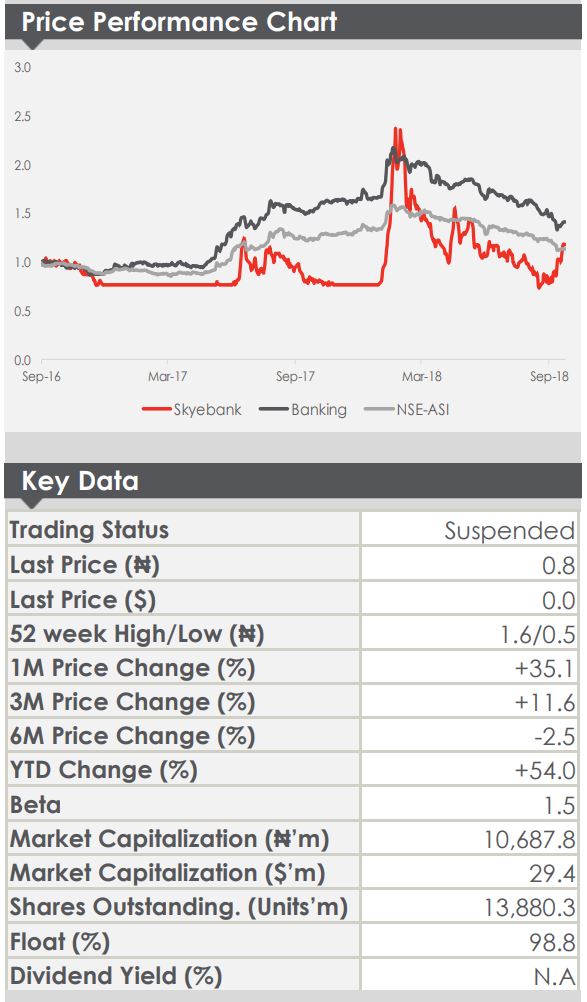 The strategy is for the Asset Management Company of Nigeria (AMCON) to capitalize the Bridge Bank and begin the process of sourcing investors to buy out AMCON. According to CBN’s press release, the bank’s performance has improved considerably compared to its pre-July 2016 era when the Apex bank took over the board of the bank due to unacceptable corporate governance lapses and its persistent failure to meet minimum thresholds in critical prudential and adequacy ratios.

Overall, all customers of Skye Bank will be automatic customers of the new bank with their accounts and records duly purchased by Polaris Bank. Also, the CBN further stated that it plans on retaining the existing board and management members while offering a new contract to all employees of the defunct Skye Bank under the name of Polaris Bank.

Surprisingly, though the bank has consistently missed regulatory filings, it has been one of the best-performing stocks on the exchange in 2018, up 54.0% YTD relative to NSE-ASI’s -14.9%. Also, the bank ended the prior week with a market capitalization of N10.7bn. However, with the revocation of Skye’s license and the emergence of Polaris bank, all interest in the bank technically becomes worthless.

The Nigerian Air Force (NAF) has postponed the entrance examination into its Military secondary schools for males and females in Jos owing to the...
Read more
Health