MultiChoice South Africa revealed in June that it had lost many DStv Premium subscribers during the past financial year due to increased competition from Netflix.

This is the first time MultiChoice has highlighted the decline in its DStv Premium subscriber base, but it is not the first time the group saw such a decline, Mybroadband reports.

DStv Premium subscribers across the pay-TV operator’s markets in Africa have been declining for the past three years.

Its overall subscriber base continues to grow, but most of this growth comes from lower-end subscribers. This means that MultiChoice’s mass-market growth is continuing, even as its high-end subscribers are declining.

Naspers’ annual results for the year ended 31 March 2018 showed that DStv Premium subscribers across the MultiChoice Group declined by 41,000.

It must be noted that Netflix launched in South Africa in January 2016.

Despite these dramatic declines, Naspers only reported a significant decline in average revenue per user (ARPU) for its video entertainment business in the 2017/18 financial year.

Read Also:  TSTV to debut pay as you go TV plus data services on October 1st in Nigeria

The graph below depicts DStv Premium subscriber numbers for the whole MultiChoice Group since 2012.

Figures for 2012 to 2015 are estimated based on subscriber mix data, as Naspers only started reporting its DStv Premium subscriber numbers in recent annual results.

As the graph shows, from March 2015 subscriber numbers started to drop – and continued to do so into 2018. 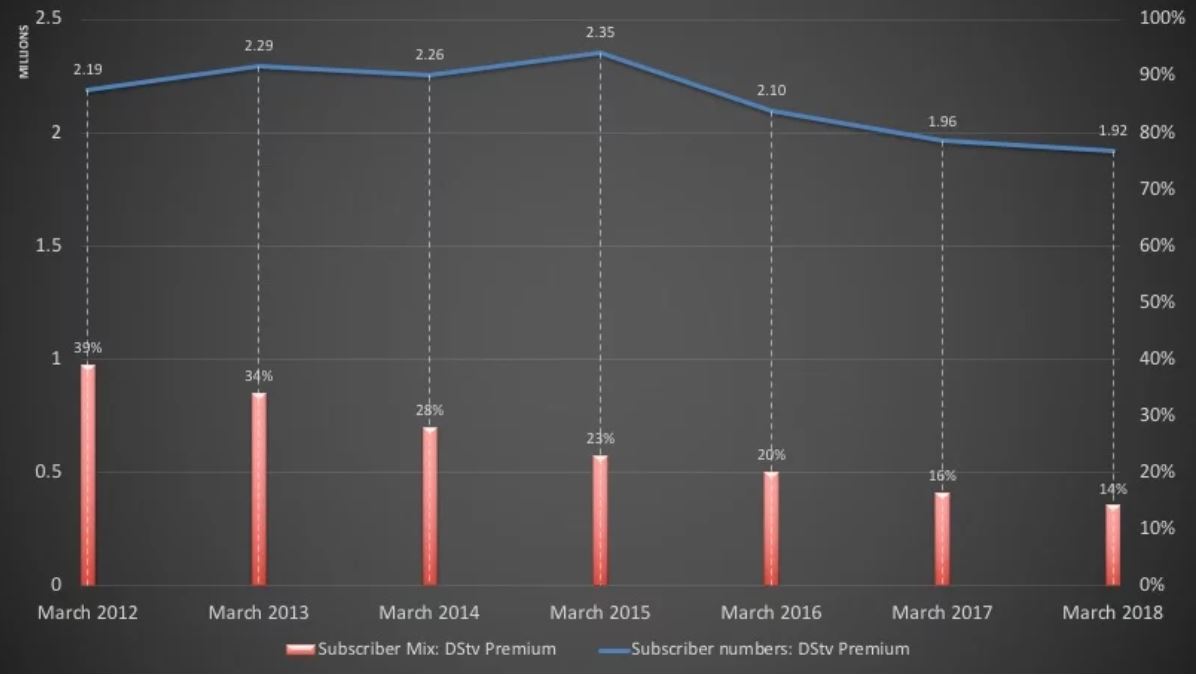 In 2011, MultiChoice gave an open invitation to Nigerians to get on the digital train and access superior audio-visual quality and top-tier entertainment at...
Read more

SuperSport viewers on DStv and GOtv can look forward to Matchday 2 action from the 2020-21 UEFA Champions League in the midweek of Tuesday 3 and Wednesday 4 November 2020.  Tuesday 3...
Read more
- Advertisement -